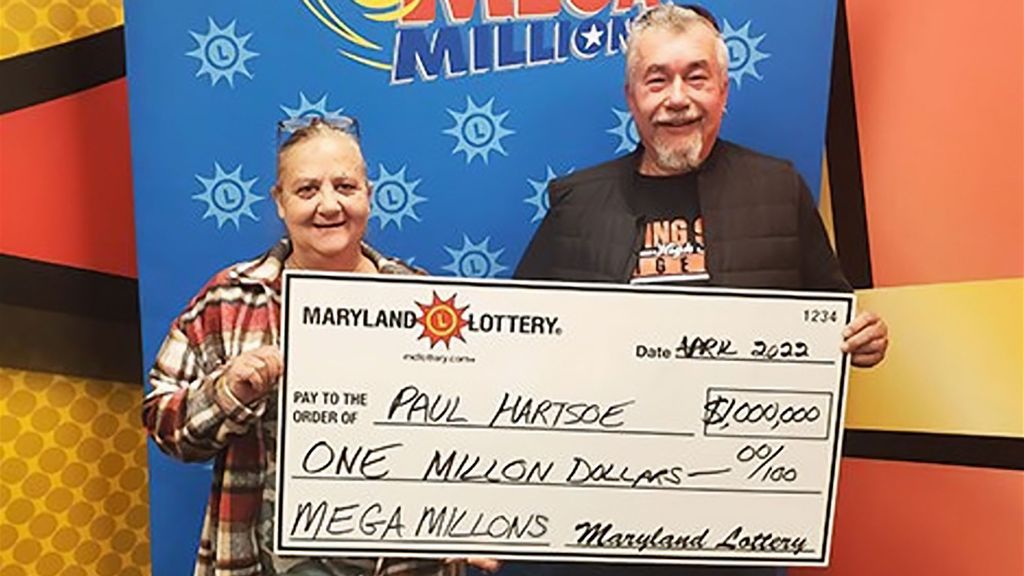 A Maryland couple discovered that they scooped 1 million dollars on the lottery after receiving a Facebook alert that someone from the store they used had won the jackpot.

Paul and Teresa Hartsoe, from the town of Conowingo in Cecil County in the US state of Maryland, won a cool million on the state’s Mega Millions draw.

In a statement obtained by Zenger News, the Maryland Lottery said on April 15: “A Cecil County couple could not stop smiling as they claimed a 1-million-dollar Mega Millions prize Friday morning.

“Paul Hartsoe matched the five white balls drawn in the Tuesday, April 12 drawing, missing only the Mega Ball. He is the second Marylander to win a second-tier Mega Millions prize in 2022.

“The commercial construction worker is a fan of both the Powerball and Mega Millions jackpot games and plays them weekly. Last Tuesday, Paul stopped at Royal Farms #087 in Conowingo to fill up his work truck and play his jackpot games.”

Paul and Teresa Hartsoe did not watch the Mega Millions draw that night and he went to work the next day while his wife stayed home.

Maryland Lottery said: “She became curious when a Maryland Lottery Facebook alert came across her phone. The alert said someone purchased a USD 1 million Mega Millions ticket at the same Royal Farms store where Paul bought his tickets. Teresa called him at work to share the news.

Teresa, 60, said: “I told him to check his tickets because someone won Mega Millions from Conowingo. He told me the tickets were at home, so I got them from the dresser and began reading off the winning numbers.”

Paul, 62, said: “I was in disbelief. We kept checking the numbers over and over.

“Conowingo is a small town, so the word got out. I don’t want to toot our own horn, but everyone was saying how we are so deserving of this prize.”

The couple, who have two adult children and six grandchildren, claimed the prize on Friday morning.

The lottery company said: “Paul said he hopes to retire in a few years and will put some money aside for that. Teresa hopes to upgrade her vehicle. They both want to make improvements to their farmhouse.”

Last month, a Maryland teacher won 50,000 dollars when her thoughtful husband bought her a scratch card to lift her spirits after a tough week.

Robyn’s husband decided to buy the elementary school teacher the ticket after a tough week at work.

Maryland Lottery said: “Last month, when Robyn Mejia was having a rough week, her husband brought home a Ca$h to Go! scratch-off to try and lift her spirits.

“Not only did the purchase lift her spirits, it made their plan to buy a new house a reality.

“Robyn scratched off the instant ticket on March 12, soon after her husband brought it home from 7-Eleven #28960 in Thurmont.

“They couldn’t believe their eyes when the 5-dollar scratch-off revealed a 50,000-dollar top prize.”

The mother of two said: “We have been saving money for a down payment on a house, thinking we would be ready by the end of the year, but now we don’t have to wait!”

The lottery company said: “The seasoned teacher, with 18 years of experience, kept the instant ticket in a safe until she was able to come to Baltimore to claim the prize during her school system’s spring break.

In December last year, a 43-year-old Maryland woman won 50,000 dollars on a scratch card after accidentally buying the wrong game instead of her favorite.

Maryland Lottery said the woman, who chose not to reveal her name and decided to call herself ‘Winner by Default’ because she had pressed the wrong button on the vending machine, won big on the 5-dollar ‘Deluxe Crossword’ scratch card.

The lottery company said: “A 43-year-old can thank the slip of her hand for a recent 50,000-dollar top prize win on a scratch-off game.

“The fortunate player went to purchase one of the Maryland Lottery’s 20-dollar scratch-off games out of a self-service Lottery vending machine, but pushed the wrong button and ended up with a 5-dollar Deluxe Crossword game instead.”

As well as saving 15 dollars by selecting the wrong card, the woman, who lives in the city of Hagerstown, ended up winning the cheaper game’s top prize.

Maryland Lottery said the woman “reluctantly” went home with the card to scratch it, discovering she had won the 50,000-dollar prize.

The single mother-of-three called it “unreal”, adding: “I thought something was wrong with the app so I scanned it again.”

She said she jumped up and down and then called her children to tell them the news: “I put the ticket on the counter and scanned it again so they could see the winning message. They couldn’t believe it was real.”

The winner told lottery officials she has just bought a new family home and will use some of the prize money to carry out renovations, with the rest going in the bank.