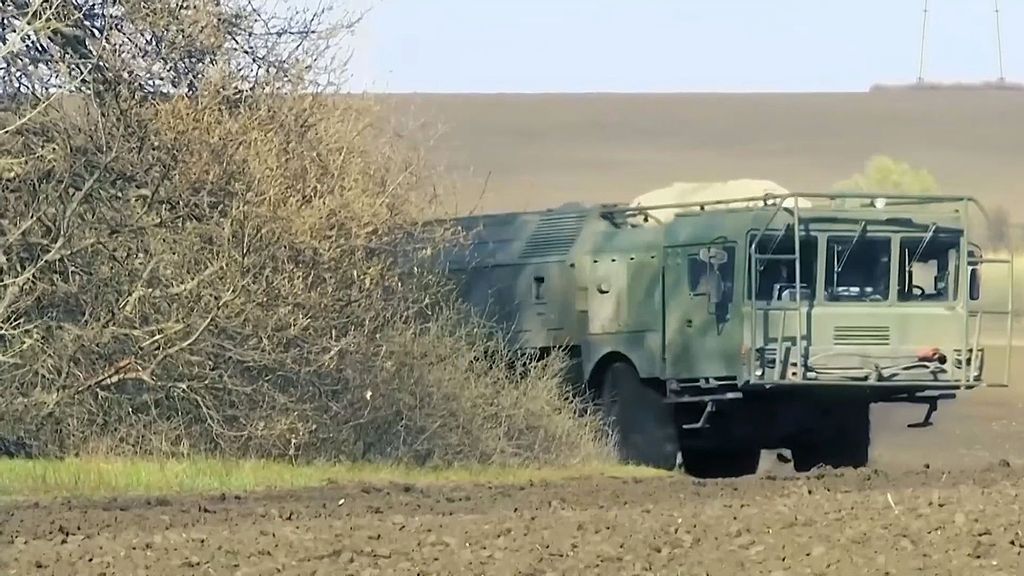 Iskander missile launch at the command post of the Armed Forces brigade in April 2022. (Ministry of Defense of Russia/Zenger)

This is the moment Russian soldiers launch an Iskander missile into the sky and reportedly destroy a Ukrainian military base.

Russian media claimed the base’s position was obtained by interrogating a captured Ukrainian soldier. After checking the information, troops fired the Iskander missile and destroyed the command post, allegedly killing around 100 soldiers.

The Russian commander in charge of the launch is quoted as saying: “The high-performance characteristics of the (Iskander) system made it possible to ideally complete the task.

“To date, we have already completed over 10 combat launches and gained vast experience that allows us to perform the assigned tasks with high quality again in the future.”

The day before the strike, the Russian MoD reported that soldiers had shelled Ukrainian strongholds in the areas of Barvenkovo and Dobropolye, hitting 113 targets and destroying storage facilities for fuel and ammunition meant for the defending forces.

Meanwhile, the Major General of the Armed Forces of the Russian Federation said invading units had destroyed an ammunition factory near the city of Brovary in Kyiv Oblast with a precision strike.

Russia invaded Ukraine on February 24 in what the Kremlin has called a “special military operation”.

Today marks the 54th day of the invasion. From February 24 to April 18, the total combat losses of Russian troops stand at 20,600 personnel, according to the General Staff of the Armed Forces of Ukraine.

Meanwhile, Ukrainian President Volodymyr Zelenskyy has invited French President Emmanuel Macron to visit Ukraine and see the devastation with his own eyes after the latter declined to label Russian atrocities as “genocide”.

«Previous Post
VIDEO: Wood You Spot It? Body Paint Fan Not Treesily Seen»Next Post
Brainy Tot Teaches Self Highway Code And Uses Knowledge To Give Parents Tips As They Drive Around