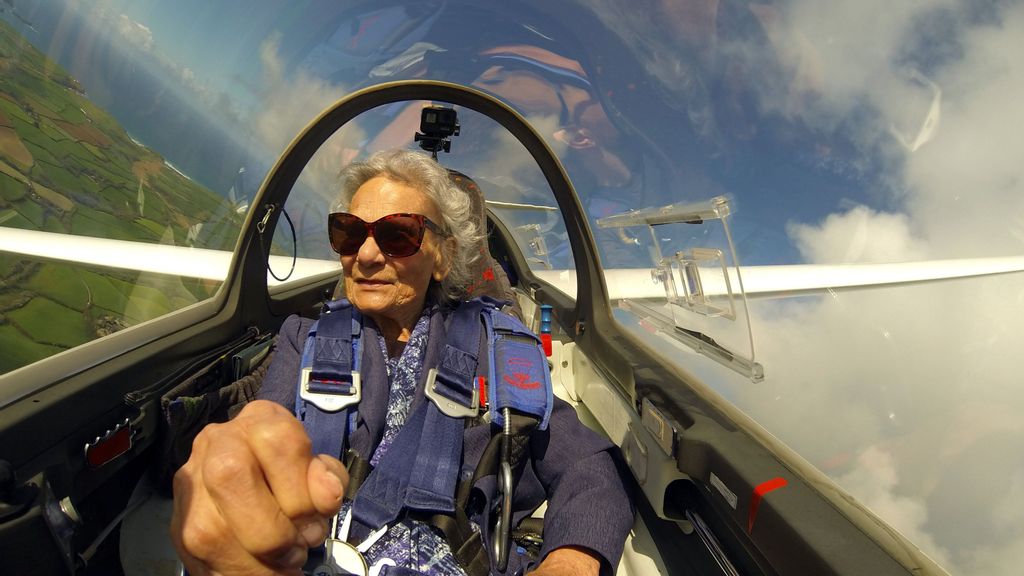 One of the last surviving members of a legendary unit of female aircraft plotters who identified enemy targets in World War Two has taken to the skies in a glider - aged 99. (Steve Chatterley/Zenger)

One of the last surviving members of a legendary unit of female aircraft plotters who identified enemy targets in World War II has taken to the skies in a glider – aged 99.

Decorated veteran Kate Orchard served in the Women’s Auxiliary Air Force in India between 1941 and 1945.

She joined the corps aged 20 and worked as a ‘plotter’ in Madras, India, to identify the known locations of enemy aircraft.

Allied Command could then send warnings of potential targets to the Royal Air Force (RAF) to shoot down.

She achieved the rank of Warrant Officer First Class and won both the Service and India Service medals.

Recalling her role in the military, she said: “I wanted to do something for my country, which we all wanted to do during the war.

“There was a large grid in this room with a map of India.

“As the messages came through you had to identify if it was hostile or friendly.

“The enemy was the Japanese aircraft. They were the ones we were plotting on the big grid.

“It saved a lot of lives, otherwise we would have been bombed.”

Kate, who has three grandchildren and four great-grandchildren, took to the skies to raise money for Help for Heroes, on Monday, April 18.

The widow, of Camborne, Cornwall, took off from Seahawk Gliding Club, at Royal Naval Air Station Culdrose, which is near the town of Helston, in Cornwall, in the UK.

She said: “I believe passionately that it’s very important that all ex-military personnel are looked after.

”Especially those unfortunate enough to have physical or psychological injuries.”

Kate was cheered on by her proud son Ben, 72, who watched from the ground.

He said: “She reacts to it positively. She always wants to do adventurous things, she took to it with great enthusiasm and loved it.

“She’s been in many aircraft many times, but this is her third glider flight. The last was three years ago. And the first was when she was 90.

“She was a plotter. Plotting aircraft as they flew in, they were either friend or foe, using the Dowding system.

“She just does things, she’s a bit mad anyhow. I just admire her for her spirit.

“She will do anything for anyone. It’s all for a good cause, for Help the Heroes.”

Kate was born into a large Anglo-Indian family with her father working as a chief telegraph inspector on the Indian railways.

She later worked for the Air Defence Centre, Number 5 Filter Room, alongside both the RAF and the Indian Air Force.

She worked as a plotter and as a teller on 24-hour watches, identifying aircraft targets and sending signals to the air warning systems.

Kate recently attended the annual Battle of Britain Sunday service at Westminster Abbey, which was attended by Prince Charles and Camilla, the Duke and Duchess of Cornwall, and the UK Prime Minister, Boris Johnson.

She even enjoyed a friendly chat with their Royal Highnesses at a reception following the event.

A spokesman for Help for Heroes said: “Kate is a truly amazing lady, full of spirit.

”But I suppose we should expect nothing less of the generation that served us so well during our darkest days.

“And for her to do this to help support the service personnel who followed in her footsteps is a wonderful gesture.”