I Want To Be Evacuated Says Alice, 4, Hiding Under Azovstal Steel Plant In Mariupol Bombed By Russia

The girl, named Alice, 4, is hiding with her mother under the Azovstal steel plant currently being bombed by the Russians.
By Joseph Golder April 19, 2022
Facebook
Twitter
Linkedin
Email 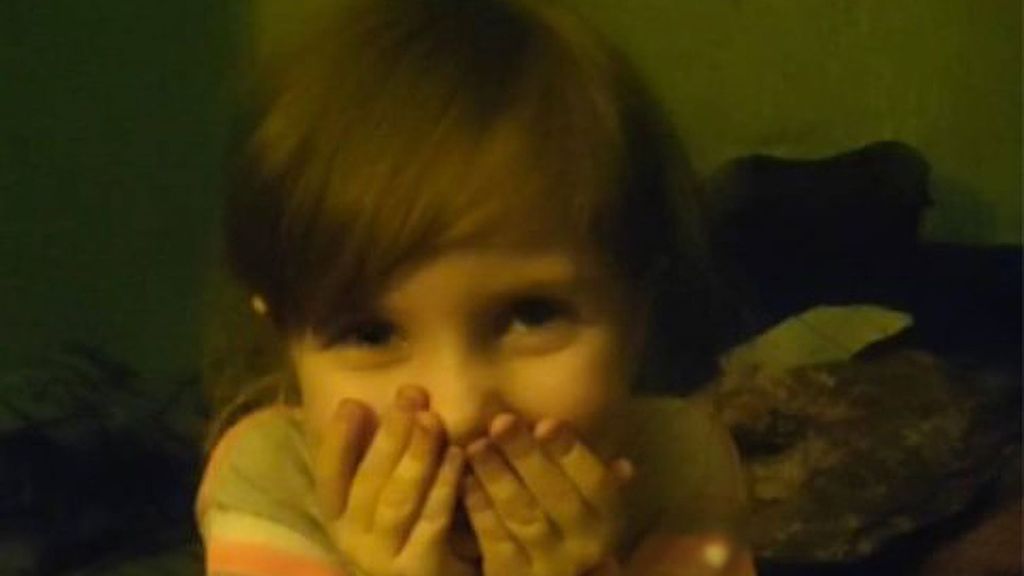 The 4-year-old Alice and her mother, a military doctor, have been hiding in a bunker on Azovstal for more than 50 days in Ukraine. (@spravdi/Zenger).

A young girl trapped for more than a month with her medic mum in a network of tunnels under besieged Mariupol has begged for help so she can leave and see her grandmother, as her hideaway is hit by rockets, bunker-buster bombs and other heavy artillery.

The girl, named Alice, 4, is hiding with her mother under the Azovstal steel plant currently being bombed by the Russians along with 1,000 other civilians, reportedly including the elderly and children.

Alice has reportedly been there for 50 days and her appeal for help, in which she says “I want to be evacuated” can be seen in the first piece of footage, which Zenger News obtained from the Center for Strategic Communications, which is part of the Ukrainian Ministry of Culture.

The second piece of footage that Zenger News obtained is from the Mariupol City Council, on the evening of Monday, April 18, and it appears to show a large plume of black smoke rising into the sky from the Azovstal steel plant on the outskirts of Mariupol, in eastern Ukraine.

A third video, which Zenger News obtained from the Azov Battalion, also on Monday evening, appears to show civilians, including children, sheltering under the Azovstal steel plant.

The Center for Strategic Communications said in a statement (in Ukrainian) that “4-year-old Alice has been hiding in the Azovstal bunker in Mariupol for more than a month. The girl’s mother is a military medic, like other civilians. When asked what she would like, Alice replied: ‘I want to be evacuated.’ Another of the girl’s wishes is to return home and see her grandmother.”

The Center added: “There are hundreds of children like Alice in Mariupol, all of whom are forced to hide in bunkers because ‘liberators’ have arrived. The enemy does not pity women, children, the elderly – no one. The girl, her peers and thousands of other Mariupol residents can be rescued only by unblocking the city.”

The Mariupol City Council said in a statement (in Ukrainian): “Russian occupiers strike at Azovstal with heavy bombs. There are at least 1,000 civilians in the underground shelters of the metallurgical plant. Mostly women with children and the elderly.”

The commander of the Azov Battalion has also appealed to world leaders for a humanitarian corridor as the Russians reportedly drop bunker-buster bombs on the Azostal steel plant in Mariupol where “at least 1,000 civilians” including young children are hiding.

The statement from the Azov commander, in English, reads in full: “I am the commander of the Azov Regiment, Denis Prokopenko. I call to the leaders of the world. Right now, in Mariupol, at the ‘Azovstal’ steel factory, hundreds of civilians are sheltering.

“Among them – people of all ages, women, children, families of Mariupol defenders. They are sheltering in the basements and bunkers from the ‘Russian world’.

“They found their only available shelter next to the Ukrainian soldiers, who are still defending the city from Russian invaders.

“Russian occupation forces and their proxies from ‘lnr/dnr’ [the Donetsk People’s Republic (DNR) and the Luhansk People’s Republic (LNR)] know that, they know about the civilians, and they keep firing on the factory willingly. They use free-fall bombs, rockets, bunker-buster bombs, all varieties of artillery, both ground and naval, for indiscriminate attacks.

“The city theater, a maternity hospital, schools, kindergartens, hospitals, houses were destroyed by those who now offer civilians evacuation and safety. These are the same people.

“And nobody believes these b*stards. Therefore I urge the politicians of all the civilized world to organize a proper ‘green corridor’, to ensure its safety and to provide immediate evacuation and the protection of civilians, wounded soldiers, and the bodies of dead soldiers, to bury them with honors.”

The first piece of footage and the statement from the Mariupol City Council has also been carried by the Ukrainian national, state news agency Ukrinform, while the Mariupol police have confirmed that numerous civilians, including women and children, are hiding from Russia’s bombs at the Azovstal steel plant.

Mykhailo Vershinin, the head of the Mariupol patrol police, has said: “There are indeed a large number of civilians on the territory of the Azovstal plant, including women, children, the elderly and infants.

“These people hid from the shelling because there are shelters that allow them to survive the shelling. They do not trust the Russians because they see what is happening city, so they remain at the plant.”

Vershinin also alleged that the Russian military forces are using Mariupol’s residents – in exchange for food – to dig through the rubble of the destroyed city to collect the corpses of civilians and that they are then burnt to hide the evidence of their deaths.

Ukraine’s President Volodymyr Zelenskyy has said that there are only two ways to solve the situation in Mariupol, either by negotiating, with the participation of international partners, or by immediately providing Ukraine with heavy weapons to free the city.

Zelenskyy said on Monday that Russian forces have launched an all-out attack on all Ukrainian positions on the front line in the Donbas region.