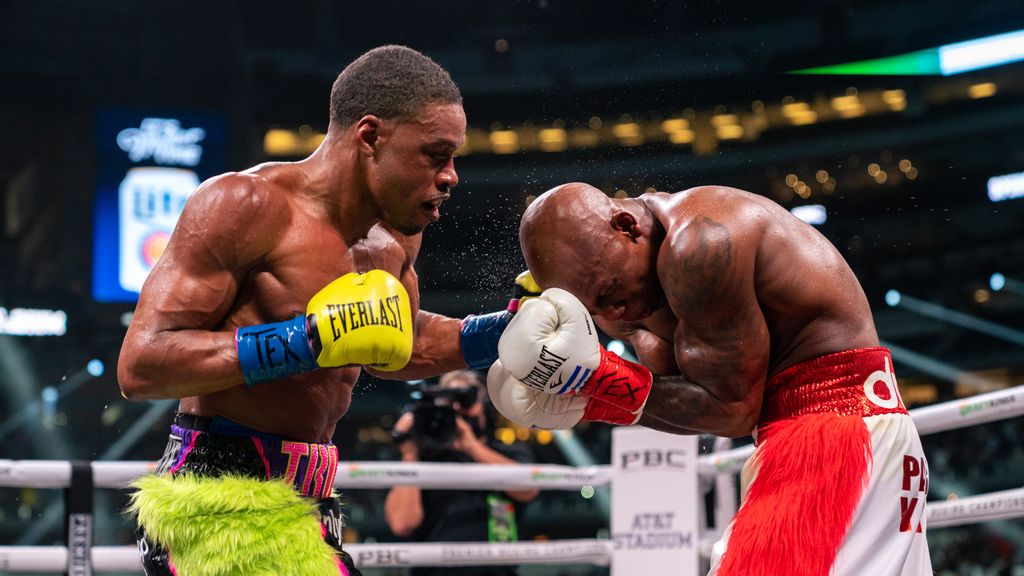 Errol Spence (left) repeatedly used his left uppercut on the right eye of Yordenis Ugas (right) on the way to a 10th-round knockout on Saturday, which added the Cuban's WBA 147-pound title to Spence's IBF and WBC versions. (Ryan Hafey/Premier Boxing Champions)

Errol Spence declared “I’m the best fighter at 147 pounds and arguably the best fighter in the world” before Saturday’s 10th-round technical knockout over Yordenis Ugas in front of nearly 40,000 spectators at AT&T Stadium in Arlington, Texas.

Remaining undefeated at 28-0 with an equally impressive 22 KOs, Spence made his case once again in the ring.

After the victory, Spence had an obscenity-laced message for WBO counterpart Terence Crawford (38–0, 29 KOs): “Terence, I’m coming for that motherf***ing belt.”

The stage is now set for a clash of unbeatens between Spence and Crawford, who had defended his title for the fifth time and recorded his sixth straight knockout at 147 pounds in defeating Porter (31-4-1, 17 KOs) to improve to 16–0 (13 KOs) in title fights.

“Everybody knows who I want next. I want Terence Crawford next,” said Spence following the sixth defense since May 2017 when his two-knockdown, 11th-round knockout dethroned IBF titlist Kell Brook whose swollen left eye’s orbital bone was broken in the fight.

Fighting for the first time since the surgical repair of retinal tear in his left eye in August, Spence was a slugging aggressor against Ugas, masterfully dictating toe-to-toe action with a vicious body attack, left uppercuts and crosses as well as right hooks from behind a piston jab.

“I was throwing the left. It wasn’t working, so I started using the jab to set it up, right hooks, coming over the top and using short shots underneath. I started placing and picking my shots, letting them go,” said Spence, who was hobbled in the sixth round.

“I felt him breaking down because he wasn’t throwing like he usually does,” Spence said of Ugas. “So I was like, ‘I got him now.’ I did see the eye closing, but I was targeting what was open and trying to punch through his guard. I thought the referee was going to stop it a lot earlier, but he just let it keep going.”

Ugas’ right eye was noticeably swollen by the sixth round and ballooning into a hematoma. The worsening condition prompted referee Laurence Cole to stop the fight at the 1:44 mark of the 10th round on the advice of the ringside physician.

The triumph was the second during a 31-month period for Spence, who was hospitalized in critical condition after an October 2019 crash in which his Ferrari flipped several times.

“I didn’t want a tuneup fight. I wanted somebody who would bring out the best in me. I knew Ugas would bring the best out of me,” Spence said.

Despite not fighting for so long, Spence said: “I didn’t have any doubts about myself at all. I believe in myself 100 percent. I train 100 percent. I knew I was going to come away with the victory.”

“I felt like my timing was a little off at first, but that was due to the long layoff,” Spence said of the Ugas fight. “But I was super excited to get back into the ring, and I knew I would catch on during the later rounds, so I kept working and punching,”

“I’ve been in the gym, and I’ve been sparring, so I didn’t have any questions. Y’all had all of the questions and the doubts about whether I was the same fighter,” Spence told reporters. “As you saw, there was no tentativeness. I was fighting to get a knockout. … I felt good.”

Ugas had his best chance starting at the 1:57 mark of the sixth round, when his hard right uppercut dislodged Spence’s mouthpiece.

As Spence went looking for it, dropping his hands in the process, Ugas followed a blistering jab with a jarring right hand that sent “The Truth,” staggering against the ropes for what potentially could have been ruled a knockdown.

But Ugas failed to capitalize on a stunned Spence over the next 20 seconds as Cole stopped the clock at the 1:32 mark, allowing trainer Derrick James to replace the mouth guard.

“I thought the referee had said, ‘stop,’ so I stopped, and then Ugas hit me with three or four shots. That’s my fault. That was a rookie mistake on my part. You’re supposed to protect yourself at all times,” Spence said. “I didn’t do that. I wasn’t out on my feet. I had turned to look for my mouthpiece. He hit me, and I was like, ‘aw, s**t.’ I tried to put my hands up and the referee jumped in.”

Ugas lamented the sixth round.

“I definitely felt that I had an opportunity to win the fight there, but he recuperated well,” said Ugas.

Ugas slipped to 12-2 (5 KOs) at 147 pounds since 2016 under trainer Ismael Salas, his lone previous setback being a disputed split decision to then-WBC champion Porter in March 2019.

“I couldn’t see from the eye, but I wanted to keep going until the end. I feel sad because I trained really hard for this fight, but all of my respect to Errol Spence. He’s a great champion.”

Porter was knocked out for the first time in his career by Crawford and announced his retirement after their fight.

“He was on point, A-through-Z. The competitor in me won’t stop looking at him and wanting to fight him again. He’s got it. I’ve said that multiple times in interviews. In and out of the ring, he has it.”

Spence plans to prove Porter wrong about who is the better fighter between Crawford and him.

“Y’all already know what time it is,” Spence said. “I said all week that after I get through with Ugas, I’m coming after Terence Crawford.”

«Previous Post
Boxer Yordenis Ugas Aims To Take Down Another Southpaw »Next Post
‘Undervalued’ Gervonta Davis Follows Floyd Mayweather Jr.’s Footsteps, To The Irritation Of Some