The incident took place in the Deoghar district in the eastern Indian state of Jharkhand on Sunday, April 10.
By Joseph Golder April 19, 2022
Facebook
Twitter
Linkedin
Email 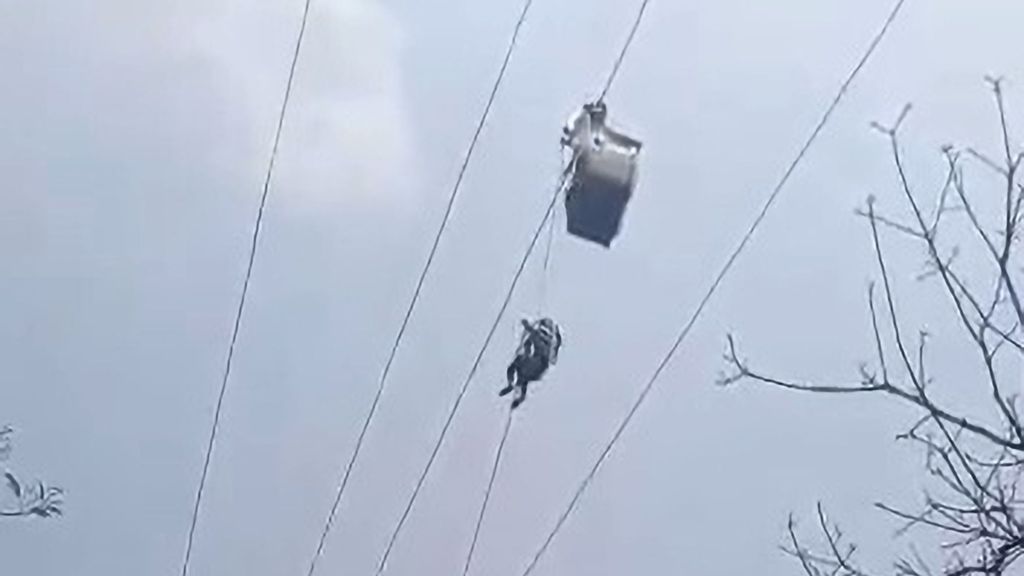 Rescue operations on a cable car in Trikut Hill ropeway, located in the eastern Indian state of Jharkhand near the city of Deoghar on 10th April. (@ITBP_official/Zenger)

One person reportedly died in the collision while two others, a man and a woman, died during the rescue operation, with the woman falling from a helicopter, on what tourist chiefs say is the highest ropeway in India.

The incident took place in the Deoghar district in the eastern Indian state of Jharkhand on Sunday, April 10, with local media outlets reporting on Saturday, April 16, that the Damodar Ropeways and Infra Ltd (DRIL) company that operates the cable cars is offering 2,500,000 rupees (32,800 dollars) in compensation to the families of the three victims.

Trikut Hill is a Hindu pilgrimage location about 12 miles from the holy town of Baidyanath Dham. The hill sits at an elevation of 2,470 feet and is known for its impressive panoramic views.

Local media report that in a joint operation, the army, the air force, the Indo-Tibetan Border Police, and the National Disaster Response Force, as well as district officials, rescued stranded tourists and pilgrims after the cable car collision. Two Russian-made Mi-17 helicopters are said to have been involved in the rescue operation.

Some people had to wait 46 hours to be rescued after a ropeway malfunction. Some 60 people were successfully rescued.

DRIL general manager Mahesh Mehto is quoted in local media as saying: “The company has decided to provide Rs 25 lakh [2,500,000 rupees] each as compensation on humanitarian grounds to the family members of those who died in the accident. We have provided cheques to the Deoghar administration for distribution.”

The woman reportedly fell from one of the rescue helicopters while being rescued at a reported height of 1,300 feet.

Local police chief Subhash Chandra Jat said that most of the people were rescued on Monday but at least three had to wait until Tuesday. He added that the collision occurred after two cable cars partly came off their cables.

The victims have not been named. The tragic incident is currently being investigated.

«Previous Post
Brainy Tot Teaches Self Highway Code And Uses Knowledge To Give Parents Tips As They Drive Around»Next Post
I Want To Be Evacuated Says Alice, 4, Hiding Under Azovstal Steel Plant In Mariupol Bombed By Russia