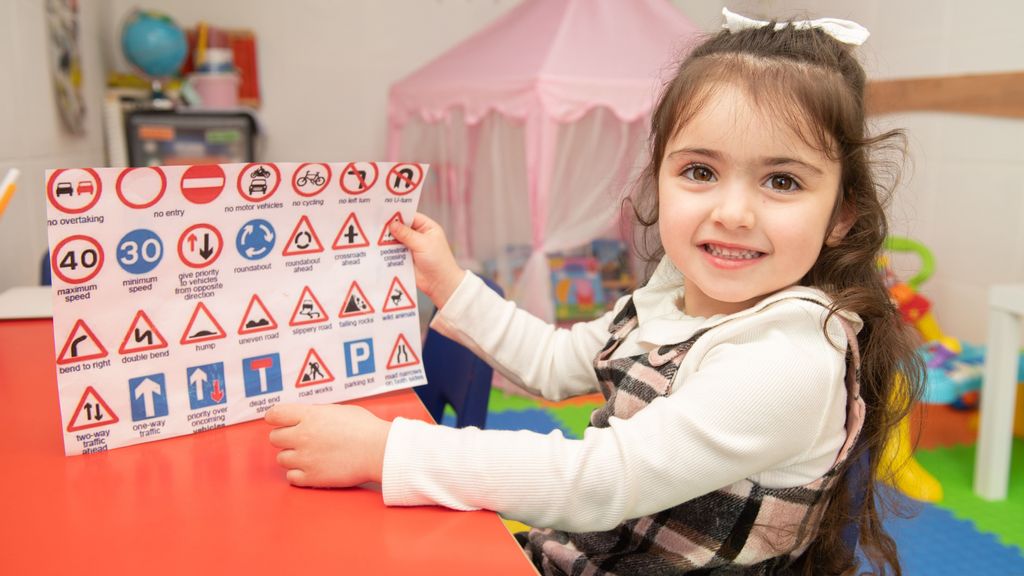 A brainy toddler has taught herself the Highway Code - and uses the knowledge to give her parents tips as they drive around. (Maria Constantinou/Zenger)

A brainy toddler has taught herself the Highway Code – and she uses the knowledge to give her parents tips as they drive around.

Ariella Procopiou, 3, is fascinated by shapes and, when she first saw a road sign, she became hooked.

Mom Maria Constantinou, 40, then decided to give her a copy of the Highway Code – which she says has become her daughter’s favorite book.

So little Ariella now sits in the back of the car when she is on trips, reciting obscure bylaws to help out her mom and dad, Nicholas Procopiou, 41.

And the precocious youngster is not just a whizz with shapes, either – she’s also learned the basics of a staggering SEVEN languages.

Maria, from Cheshunt, a town in Hertfordshire, in the United Kingdom, said: “She’s got a memory like you wouldn’t believe. If you show her something once she’s memorized it.”

Ariella, who could recognize letters, colors and shapes in English by 18 months old, uses songs and repetition programs on YouTube to learn, her mom said.

Her first words were aubergine, persimmon, hexagon and pentagon, and she knows all the names of the planets in our solar system.

Ariella also taught herself to read aged two, putting together the sounds all on her own – and she takes out a new book every day from the local library.

Maria said: “If she doesn’t know what something means she gets so frustrated. She just keeps finding new things to learn.

“She loves languages and she can’t go to bed until she’s learned numbers up to 100 and phrases like goodnight, hello, and how are you.

“She just became fascinated by anything Chinese one day, and she came to find me and started talking in Chinese, so I thought, ‘right okay, it’s Chinese this week.’

“She had my phone in her hand with this song that teaches the Chinese colors and she’d learned them all.

“I held up pieces of colored paper and she said the color in Chinese. I told her nursery she loves languages so they taught her Japanese numbers up to 100 on her first day to settle her in.

“Sometimes she just comes in speaking in a different language she’s learned from my phone and I don’t know what it is.

“I know if I sat down with her I could teach any language and she’d learn it just like that.”

Ariella was conceived via IVF after Nick, a barber, and Maria, a childcare worker, spent three years trying.

The tot’s talents also extend to doing puzzles of up to 42 pieces all by herself, and her mom has already taught her the times tables.

She could also recite her address and her mom’s mobile number from age two, and can repeat an advert from the TV even if she’s only heard it once.

Maria said: “She knows things way beyond her years. I’ve always thought she’s like an old soul in a young body, it’s like talking to a 20-year-old, not a three-year-old.

“I’ve known ever since she was born because she was so quirky, and that’s often the case with gifted children.

“She was always very attentive and aware, she cried when she couldn’t communicate something, it was such a relief to her when she could speak.

“Usually parents read to their children at night, but I’m the one with my head on the pillow.

“She reads everything from storybooks to leaflets in the doctors’ surgery. She loves the Highway Code – it’s her favorite book.”