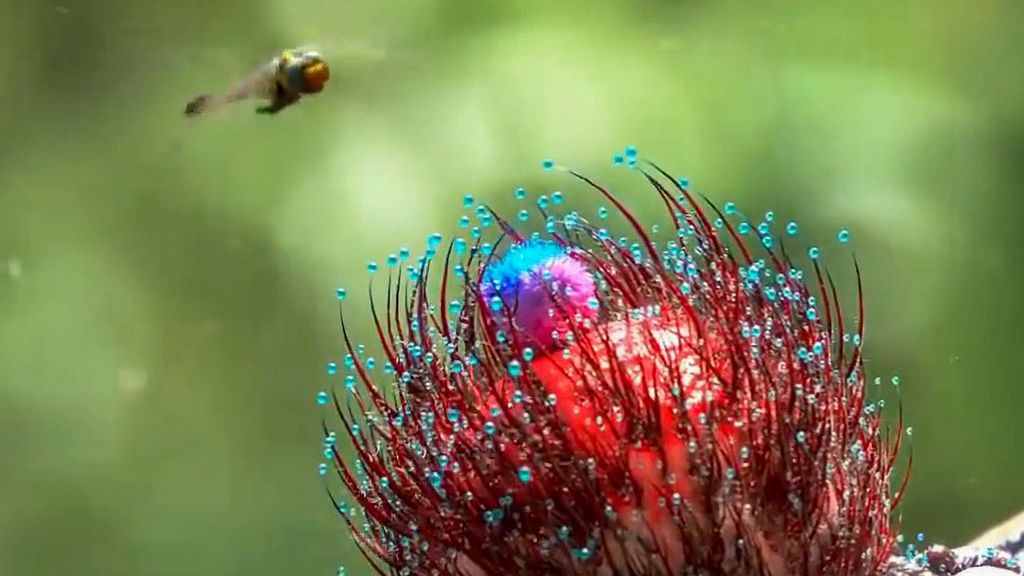 An animation of a fungus consuming a bug. (@luke_penry.exr/Zenger)

These images show the creativity of a British man who brings images of mushrooms and fungus to life in a 3D abstract realism style.

Zenger News spoke to the 31-year-old artist Luke Penry, from the UK capital London, who describes himself as ‘3D generalist’.

The images and the videos show the work created by the artist, who experiments with creating 3D motion images of mushrooms and fungus.

3D modeling represents the process of using special software to create a mathematical representation of a three-dimensional object or shape by manipulating edges, vertices, and polygons in a so-called 3D space.

The objects in the 3D space can be animated and moved and rotated like real objects, which is how 3D animations are made, which are the basis for games and virtual reality.

In the first video, a white mushroom can be seen as if moving, shaken by the wind, while in the second video, water seems to be falling from a green mushroom.

In the third video, an animation of a fungus that has evolved over time to resemble a cobra can be seen, as well as a Secretarybird, or secretary bird (Sagittarius serpentarius), a bird of prey that hunts on the ground and hits its prey with its long legs.

Luke, who has over 65,000 followers on Instagram, told Zenger News: “I first got into 3D when I was at university, a friend introduced me to 3ds Max and I started to teach myself using YouTube tutorials.”

He said that most of the time, ideas come to him when he is trying to fall asleep. He added: “I watch sci-fi, nature documentaries and have a keen interest in evolution. These all combine to help me come up with ideas.”

Luke added that he enjoys looking at his artwork, and he is really happy with the results.

He has spent more than 10 years using and learning 3D tools and programs to learn these skills, adding: “I use no filters, I bring the raw 3D sequences into After Effects and use Colorista 5 to color correct the renders.”

He said he really enjoys what he does, adding that he makes his creative images in his apartment. He said this is not his full-time job and added: “I do this in my spare time as a creative outlet.”

«Previous Post
No Can Do: Horror Over Two-Year-Old Chicken Meal»Next Post
VIDEO: Teacher Writes Random Things On The Board To Check Students Are Paying Attention