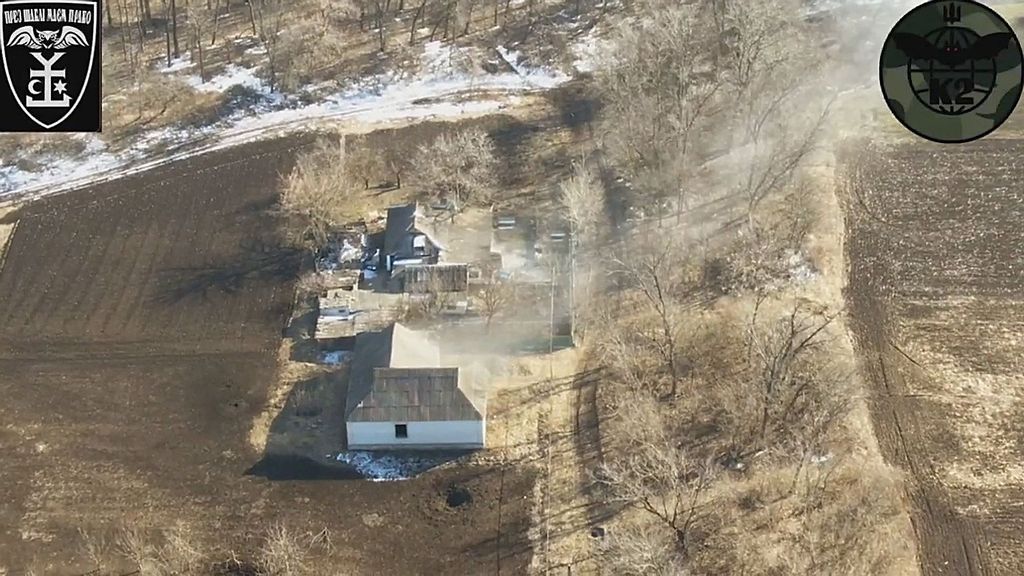 Ukrainian military liberating one of the villages of Donetsk region from the Russian occupiers in April 2022. (@K2.54OMBr/Zenger)

The Russian soldiers can be seen fleeing from a house as Ukrainian forces target the area, reportedly in the eastern Donetsk region. A first explosion sends some Russian soldiers running for their lives, while another explosion hits a large farmhouse and destroys its roof.

A third explosion can be seen sending some of the Russian soldiers flying, while others run on. Some of the soldiers get back to their feet and continue fleeing, but at least two can be seen lying on the ground and not moving.

The area continues to be hit, with more soldiers fleeing from another occupied building on the farmstead.

After a few seconds, a lone soldier can be seen fleeing the area shortly before more explosions follow, destroying most of the buildings. One more soldier is then seen running away from the devastation.

The footage then cuts to Ukrainian troops who appear to be on the ground at the same location after the shelling has stopped. One appears to check on an unmoving Russian soldier before giving the camera the thumbs up, apparently signaling that the enemy soldier is dead.

Zenger News obtained the images and a statement from the 54th Mechanized Brigade of the Ukrainian Ground Forces this morning, on Monday, April 18.

The K-2 Battle Group, which is a reconnaissance group that is part of the 54th Mechanized Brigade, said: “The war is ongoing in Ukraine. Russians and their mercenaries bring ‘Russian peace’ to Ukrainian cities and villages.

“And so the orcs wanted to capture one village in the Donetsk region.

“They decided to gain a foothold in people’s homes and from there develop their offensive, which brings death and destruction.

“But they were hindered by K2 scouts and another unit from the 54th Mechanized Brigade.”

They added that the “orcs”, which is a term that Ukrainian military forces often use when referring to their Russian enemies, fled leaving their own men, both the dead and wounded, behind.

They also said: “So it will be with everyone who comes to our land!”

They signed off with the now-famous slogan, “Slava Ukraini!”, which translates to “Glory to Ukraine!” in English.