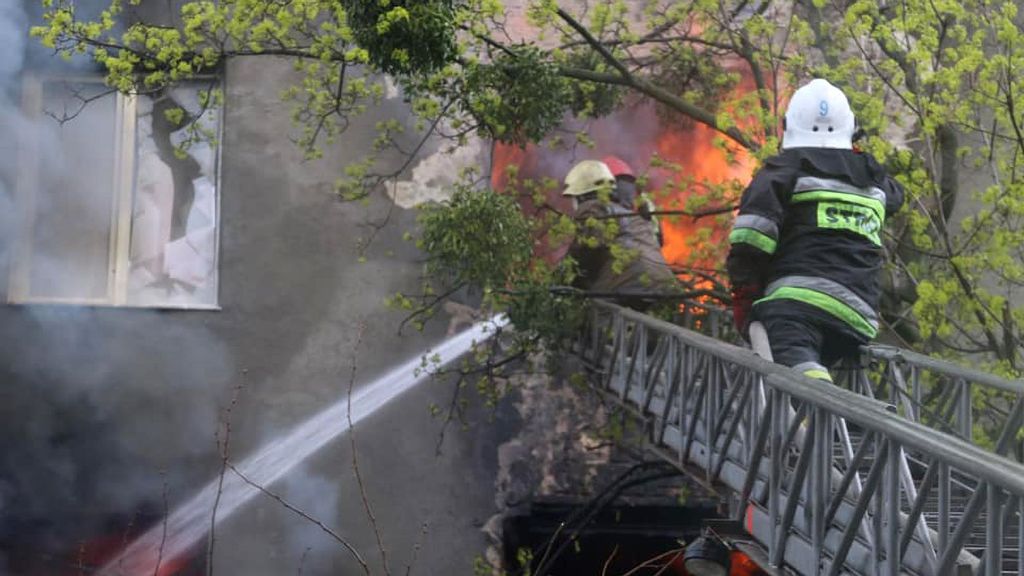 Rescuers working on the fires caused from the Russian Shelling on residential buildings in Kharkiv, in April 2022. (SES of Ukraine/Zenger).

Russian forces have reportedly bombed 18 residential buildings during the shelling of the city of Kharkiv.

The Ukrainian emergency services said the shelling of Kharkiv, located in the north-eastern Ukrainian region of Kharkiv Oblast, took place on the afternoon of Easter Sunday.

The State Emergency Service (SES) of Ukraine said 18 multi-story homes were struck by Russian missiles, sparking a huge blaze in several apartments in one five-story building.

The SES confirmed that fire crews eventually extinguished all the fires.

In the footage, a fire engine is seen arriving outside the blazing building, apparently affecting several apartments.

The scene cuts and firefighters are seen tackling the flames in a top-floor apartment using an aerial ladder.

At one point, Ukrainian firefighters tackle fires raging in at least four apartments as thick smoke fills the air.

At the end of the clip, the flames appear completely extinguished and fire officials survey the damage on the ground.

In a statement obtained by Zenger News, the SES said on April 17: “Kharkiv: rescuers are dealing with the consequences of enemy shelling.

“On April 17, around 2 pm, as a result of enemy shelling in the central part of the city, residential multi-storey houses were hit at 18 addresses, of which apartments were on fire on the fourth and fifth floors in one five-storey building.”

The SES confirmed that emergency teams extinguished all fires and “information regarding the victims is being gathered”. But according to Ukraine’s national news agency Ukrinform, the health department of the Kharkiv Military Administration reported that five people were killed and 13 others were injured during the shelling of the city center as of 3 pm on April 17.

Russia invaded their neighbors Ukraine on February 24. Today (Monday) marks the 54th day of the invasion. From February 24 to April 18, the total combat losses of Russian troops stand at 20,600 personnel, according to the General Staff of the Armed Forces of Ukraine.