The Mi-28n is a Russian, anti-armor attack helicopter that can operate in all weather conditions and conduct daytime operations. 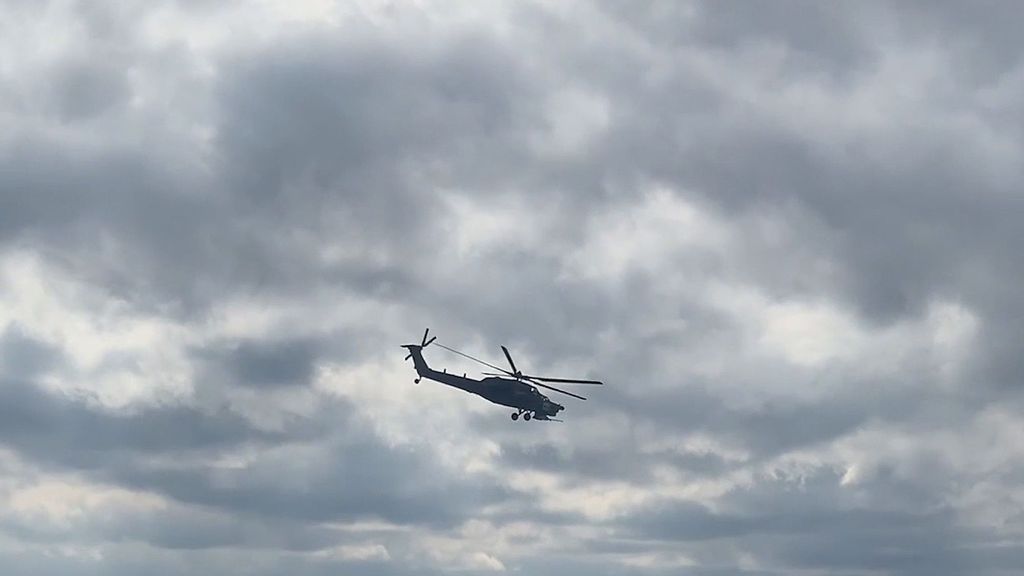 A Russian Mi-28N attack helicopter destroyed military equipment of the Army of Ukraine, in April, 2022, in Ukraine. (Ministry of Defence of the Russian Federation/Zenger)

The footage begins with what appears to be a Russian helicopter flying towards a target. The footage then cuts and shows the view from a targeting system that appears to show an air defense system on the ground firing a missile.

Smoke can be seen rising from the ground as the helicopter appears to open fire with a heavy machine gun before it veers to the left again.

Finally, the footage cuts again and shows the attack helicopter landing among other helicopters at an undisclosed location that appears to be an airbase.

Zenger News obtained the footage from the Russian Ministry of Defense along with a statement claiming that the images show the “infliction of fire damage on military equipment and objects of the Armed Forces of Ukraine by the crews of Mi-28n attack helicopters.”

The Mi-28n is a Russian, anti-armor attack helicopter that can operate in all weather conditions and conduct daytime operations as well as missions at night. It is equipped with a heavy machine gun under the cockpit and also has missiles on either side.

It is currently unclear where exactly in Ukraine the images were filmed, but the footage was also carried by Russian, state-owned media.

Fighting in Ukraine is shifting to the east of the country, but Ukrainian officials this morning are reporting numerous airstrikes across the country, with five people reported killed and 13 injured in the north-eastern city of Kharkiv overnight.

The Governor of Mykolaiv, Vitaliy Kim, has reported sustained rocket attacks. The city of Mykolaiv is acting as a buffer impeding Russian advances on the port city of Odesa, seen as a prize target for the Russians, as gaining control of it would effectively cut Ukraine off from international shipping and render it landlocked.

There has also been a missile attack reported on the western Ukrainian city of Lviv, which had until recently, been believed to have been relatively safe. At the time of writing, five missiles had hit the city this morning (Monday, April 18).

Ukrainian President Volodymyr Zelenskyy has invited French President Emmanuel Macron to visit Ukraine and see the devastation with his own eyes after the latter declined to label Russian atrocities there as “genocide”.