The Ukrainian authorities have said that fortunately, no one was killed in this footage.
By Joseph Golder April 18, 2022
Facebook
Twitter
Linkedin
Email 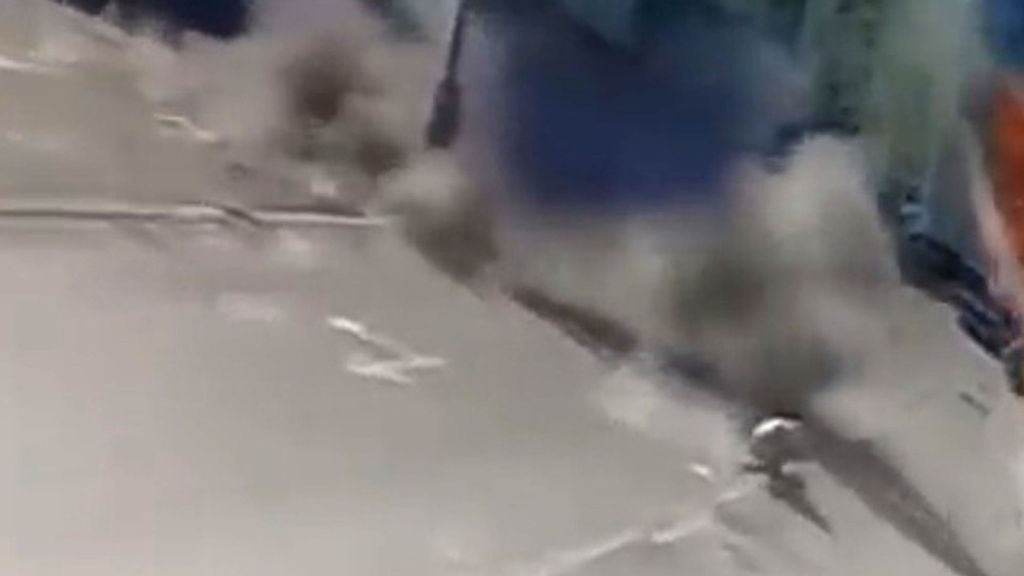 The moment of the falling of the Russian Missile on the Street in Kharkiv, Ukraine. (@DefenceU/Zenger)

This is the shocking moment a missile destroys a trash can and narrowly misses a Ukrainian woman walking down the street by inches.

The woman eventually gets back up and walks away from the scene. Two other people can also be seen in the background narrowly avoiding being hit by the explosion reportedly caused by Russian ordnance.

The incident reportedly took place in the city of Kharkiv amid widespread reports from Ukrainian officials that cities across the country were hit by missiles last night (Sunday, April 17).

Zenger News obtained the images from the Ukrainian Ministry of Defence along with a short statement saying: “Kharkiv. Two months ago, no one in Ukraine could have imagined something like this. Now it is becoming commonplace for many Ukrainians.”

The images were also shared by the Ukrainian Armed Forces who said that the images showed a “strike on a strategic military trash can.”

The Ukrainian authorities have said that fortunately, no one was killed in this footage.

Fighting in Ukraine is shifting to the east of the country, however, there have been reports of civilian fatalities overnight due to Russian missile strikes, with the authorities now reporting that 6 people are so far said to have died and 13 were injured in Kharkiv alone.

A child is also said to be among the victims, according to Ukrainian officials, although it was unclear at the time of writing if they had been injured or killed.

The Governor of Mykolaiv, Vitaliy Kim, 41, has stated that the city of Mykolaiv is under continued rocket attack by Russian forces, while at least five missile strikes seven reported in the western city of Lviv, deemed until recently to be a relatively safe city.

The Ukrainian Prosecutor General’s Office said yesterday that at least 202 children have so far “died due to the armed aggression of the Russian Federation in Ukraine”.

The Prosecutor General’s Office added: “More than 563 children were injured in Ukraine as a result of full-scale armed aggression by the Russian Federation.”

They added: “These figures are not final, as work is underway to establish them in places of active hostilities, in the temporarily occupied and liberated territories.”

And they also said: “The bombing and shelling by the Russian armed forces damaged 1,018 educational institutions, 95 of which were completely destroyed.”