For Catholics, Easter means abstaining from eating meat on Ash Wednesday, Good Friday, and the other Fridays leading up to Easter.
By Joseph Golder April 18, 2022
Facebook
Twitter
Linkedin
Email 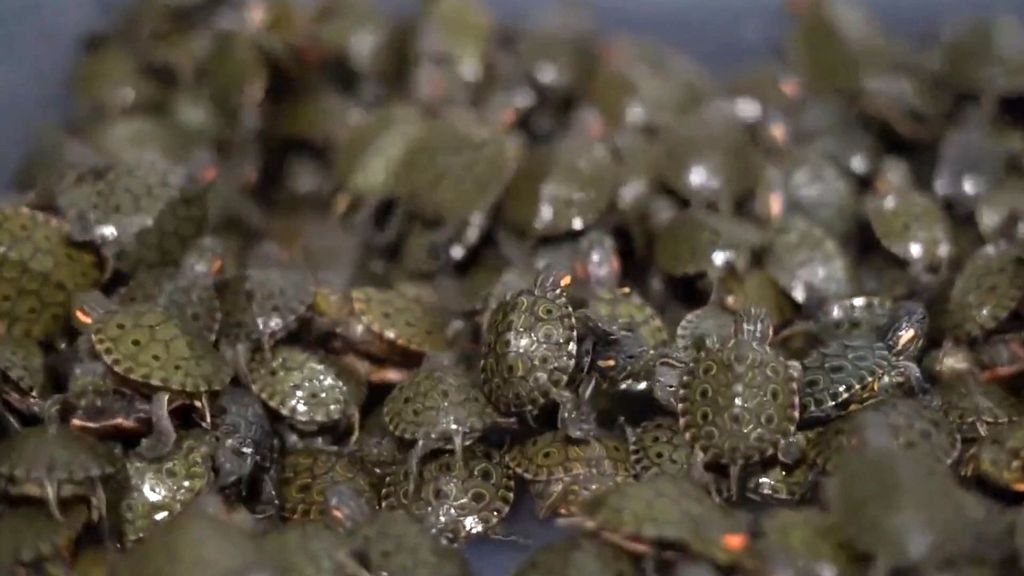 Police seized 2,047 turtles from a citizen transporting them on a public bus, on 14th April, in Quindio, Colombia. (@CorpoQuindioCRQ/Zenger)

A suspected animal trafficker has been arrested while allegedly attempting to smuggle over 2,000 turtles on a long-haul coach across Colombia.

The Colombian authorities have said that this type of turtle is considered a delicacy at Easter in the devout, primarily Catholic country, and they often catch smugglers this time of year moving them across the country to meet demand after they have been poached in the wild.

For Catholics, Easter means abstaining from eating meat on Ash Wednesday, Good Friday, and the other Fridays leading up to Easter.

But when beef, pork, and poultry are not allowed – fish is not the only alternative protein source and in Colombia, the faithful have their own tradition of eating turtles.

The consumption of turtle meat during Lent is so deeply rooted in the culture of northwestern Colombia that inhabitants have a popular saying: “If you didn’t eat turtle meat, you didn’t celebrate Holy Week.”

The footage first shows at least six large plastic containers with a multitude of tiny turtles seen moving around inside them after the authorities seized them from the bus during the bust.

The images then show the authorities piling up the large plastic containers of turtles on the pavement after having seized them. And close-up images of the turtles also show that they are so small that they can fit in the palm of a person’s hand.

Zenger News obtained the images and a statement from the Regional Autonomous Corporation of Quindio (CRQ), saying on Thursday, April 14, that they had “detained a citizen with a shipment of 2,047 turtles that he was transporting on a public service bus.”

The CRQ is a Colombian, governmental organization that is in charge of the management and protection of environmental resources in the District of Quindio, which is a department in western-central Colombia.

The Colombian regional environmental authorities report directly to the Colombian Ministry of the Environment.

The man had reportedly left the northern Colombian region of Cesar, which is near the Caribbean Sea, aboard the coach, and was headed to the south-western region of Valle del Cauca.

The authorities reportedly stopped the suspected animal trafficker, who has not been named, while the coach was transiting through the Quindio region.

The CRQ said that the arrest “was the result of one of the checkpoints that our Highway Police has and that thanks to cooperation between the Environmental Police the Regional Autonomous Corporation of Quindio, we managed to seize these individuals of wildlife

The turtles were reportedly trachemys callirostris turtles, according to Jose Manuel Cortes Orozco, the director of the CRQ.

They are known in Colombia as “tortugas hicoteas” and are found in Colombia and Venezuela. They have green shells with bright splashes of color. The species typically reaches sizes ranging from about 10 inches up to a maximum of 13.7 inches.

The authorities are reportedly giving the 2,047 turtles a health checkup before they are “released back into their natural habitat in the wild”, in the Colombian Caribbean, on the Atlantic coast.

The authorities said that this type of turtle is one of the most trafficked species in Colombia, along with the red-footed tortoise (Chelonoidis carbonarius), known as the morrocoy tortoise locally, and the green iguana (Iguana iguana).

«Previous Post
Coast Guard Rescues Rare Sea Turtle Found Exhausted And Floating In Mediterranean»Next Post
Poll: 45% Of Dog Owners Believe Their Pet Is In Better Shape Than They Are