Boxer Yordenis Ugas Aims To Take Down Another Southpaw 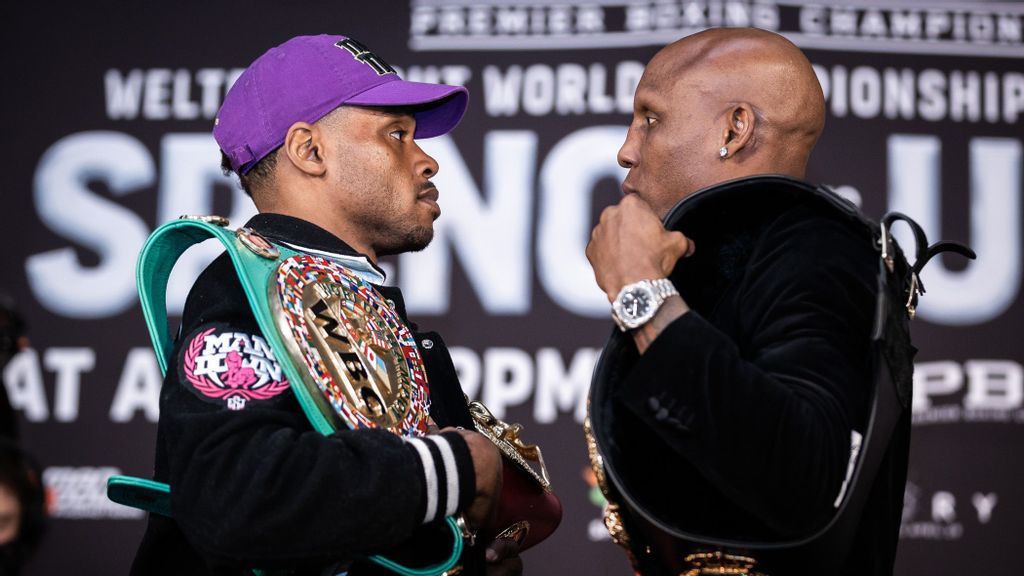 The Cuban WBA 147-pound champion has been calling out IBF/WBC champion Spence for quite a while, and he’ll face “The Truth” in a unification bout on Saturday at AT&T Stadium in Arlington, Texas.

“When you’re a southpaw, I know how to handle it,” said Ugas, 35, who will battle Spence in a Premier Boxing Champions event to be televised live on Showtime Pay Per View (9 p.m. ET/6 p.m. PT).

Ugas claims “a special technique against southpaws,” having triumphed in amateur victories over left-handed current and past champions Terence Crawford, Khabib Allakverdiev and Julius Indongo.

Professional victories over left-handed opponents include a fourth-round stoppage of Bryant Perrella (September 2016), and, in 2018, a seventh-round TKO of Ray Robinson (February) as well as a unanimous decision over Cesar Miguel Barrionuevo (September).

Now Ugas is ready for Spence, who returns for the first time since vanquishing two-division champion Danny Garcia (December 2020) by unanimous decision. That bout came on the heels of Ugas  being hospitalized in critical condition in October 2019 from a car crash which involved him being ejectioned from his flipping Ferrari.

“I promise you blood, sweat, and everything that I have to give for my country and for my fans,” Ugas said. “For everyone watching the pay-per-view, you’re going to see the same Ugas that put his heart and soul into this sport that means so much to me.”

Ugas accepted the Pacquiao fight on 11 days’ notice, replacing Spence after the latter suffered a torn retina in his right eye which required surgery to repair.

“I did my job against Manny Pacquiao. I took the fight on 11 days’ notice. Whatever Spence said about what he would have done against Pacquao, I’m not concerned. I’m only focused on the challenge that I have against Spence,” said Ugas, whose four, short-notice victories include those over former interim champion Jamal James (August 2016) and title challenger Thomas Dulorme (August 2017).

Ugas is 12-1 (5 KOs) under trainer Ismael Salas at 147 pounds since 2016, his lone setback being a disputed split-decision to then-WBC champion Shawn Porter in March 2019.

A legal 10th-round punch from Ugas caused a cut around the right eye of Porter, who lost his very next bout and his WBC title by split-decision to Spence in September 2019.

“Spence punches a little harder and definitely landed the cleaner shots against me and touched me much more than Ugas did, using his ability to make adjustments,” said Porter of Spence, who has edges in height (5-foot-9&half; inches to 5-foot-9 inches) and reach (72 inches to 69 inches) over Ugas.

“Ugas’ right hand might be the best aspect for the fight for him against Spence,” Porter said, “Ugas has an awkward way of throwing it from an angular, overhand place. It’s been a key against southpaws as it was in the case of Ugas’ fight with Pacquiao, and it could be a key for him against Errol Spence.”

“It has been a long time— over six years, of hard work with Yordenis Ugas. Finally, Yordenis will get what we’ve been working for,” said Salas of Ugas, whose victory over Ramos made him Cuba’s first 147-pound champion since Jose Naples defeated Curtis Cokes in April 1969.

A 6-year-old Ugas began boxing as a means of overcoming poverty.

“I come from a humble family that had no roof over their head. These are things that toughen you up when you’re young and make you who you are in life. It’s going to be a great night for me but no different than any other fight that I’ve had throughout my boxing career.”

“I beat ‘Bud’ Crawford, 27-10, in the 2007 Pan American Games,” said Ugas. “It was an awesome fight, but I always knew Crawford had greatness in him and a bright future in the sport.”

Ugas’s defection through Mexico to Miami left behind his parents and several cousins as he went 5-0 with three knockouts within his first five months as a professional. Ugas was 11-0 (5 KOs) before suffering his first loss by eight-round unanimous decision to then-undefeated Johnny Garcia in March 2012.

“I had to leave Cuba on a speedboat. It’s been a long, hard road. I had to go through a lot to get to where I am today.I had to overcome everything alone. Not only professionally, but personally,” Ugas said.

“I’ve wanted to be free my whole life. I want to be able to provide for my family (back in Cuba). The only way that it is possible is to succeed here with something I love to do.”

But at 15-1 (7 KOs) in 2014, Ugas nearly retired from boxing following consecutive split- and unanimous decision losses to then-unbeatens Emanuel Robles (February) and Amir Imam (May).

Then, he met Salas.

“Ismael Salas is one of the best trainers in the world. When I was out of the sport for over two years, I went to the gym with him and he built me back up. People know my story by now. I came back from being 15-3 back in 2016,” said Ugas, who has competed from 146&half; -to-158&half; pounds.

“Ever since then, I have established myself as part of the elite in this division. If [Errol Spence] is the big fish, I belong in that same tank because I’m willing to swim with the big fishes whenever, wherever. I have been willing to do whatever it takes to get to where I am right now.”