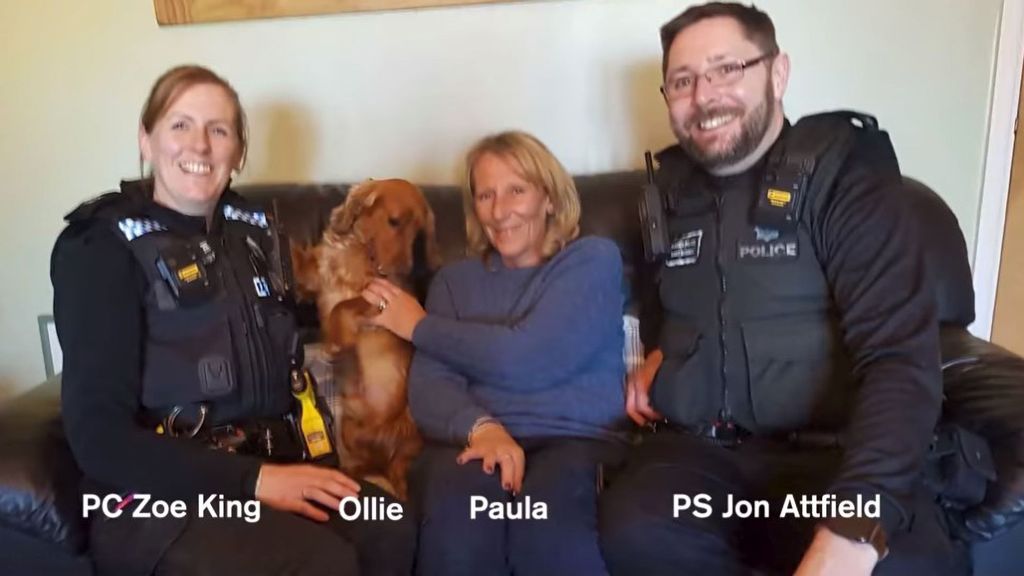 Ollie the cocker spaniel was reunited with his owners after being stolen in Rye. (Sussex Police/Zenger).

This is the tear-jerking moment a woman is reunited with her missing pooch Ollie after he was stolen last month, leaving her “absolutely destroyed”.

Ollie the cocker spaniel, 17 months old, was stolen from Broad Oak Kennels in the town of Rye in the English county of East Sussex on 31st March.

In a statement obtained by Zenger News on 12th April, Sussex Police said: “Officers from Heathfield’s Rural Crime Team have secured a heartwarming reunion by returning Ollie the cocker spaniel to his owners.

“Seventeen-month-old Ollie was stolen from Broad Oak Kennels in Udimore Road, Rye, in the early hours of Thursday, March 31, sparking a police investigation and huge ‘doghunt’ across social media.

“An extensive search was carried out, including the proactive arrest of a suspect by neighbourhood response officers in Hastings who was later released with no further action.

“But at around 7am on Thursday (April 7), the owner of a house in Brands Hatch, Kent, heard a scratching and whining at their back door – coming from a small, tan-coloured cocker spaniel.”

The police added: “The quick-thinking rescuer contacted Battersea Dogs Home, who identified Ollie from the numerous online appeals. They got in touch with the owners, who contacted us, and our officers were up there in a flash.”

A scan of the dog’s microchip confirmed it was Ollie and he was returned to his worried owners Mark and Paula.

Mark said: “This week has been the worst nightmare of my life. Ollie was bought as a therapy dog for my wife, and him going missing absolutely destroyed her – she hadn’t stopped crying since last Thursday.

“Now she’s like a changed woman! Yesterday she’s happy, bubbly, we may even have polished off a couple of bottles of wine.

“And thankfully, Ollie’s fine – probably a bit shell-shocked – but no injuries.

“I’d just like to say thank you to everyone involved. All the appeals on social media, everyone who shared them and the police for their investigation – I know how much they’ve been doing behind the scenes.”

Sergeant Jon Attfield, of Heathfield’s Rural Crime Team, said: “Myself and PC Zoe King were delighted to be able to reunite Ollie with Mark and Paula, who have been so supportive in what has been a horrific week for them.

“It’s highly likely that Ollie’s captors have been forced to release him after a combination of extensive social media coverage and proactive work by officers from multiple policing teams simply made him too hot to handle. Luckily, Ollie has then had the good sense to make his way into someone’s back garden.”

«Previous Post
Caught Fish: Mississippi Angler Nets Biggest Catfish In States History»Next Post
Nearly Half Of Respondents Think You Can Be “too Old” To Start Saving For Retirement