Treasure Of 1,200 Ancient Roman Coins Found By Amateur Archeologist May Have Been Sacrifice To Gods

Daniel Luedin, was searching a forest with a metal detector near Bubendorf when he made the discovery in September 2021.
By Joseph Golder April 15, 2022
Facebook
Twitter
Linkedin
Email 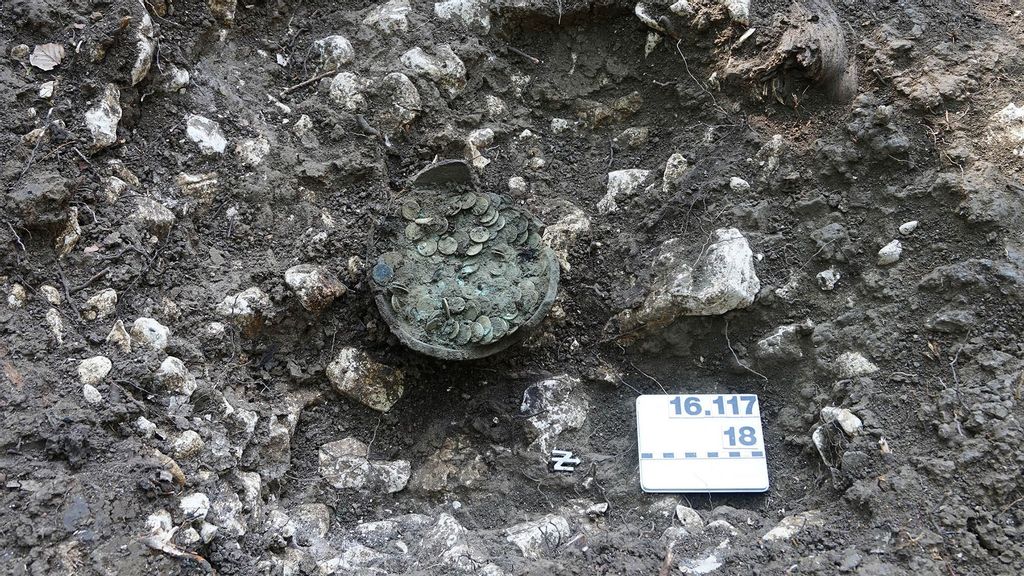 The ceramic pot with the coins after professional excavation by employees of Archeology Baselland in Switzerland. (Archaologie Baselland/Zenger)

An amateur archeologist has found this huge treasure trove of over 1,200 priceless, ancient Roman coins dating back to the 4th Century AD and the reign of Emperor Constantine the Great.

Experts studying them have speculated that they might have been buried as a “sacrifice to the gods”.

The finder, Daniel Luedin, was searching a forest with a metal detector near Bubendorf, a municipality in the district of Liestal, in the canton of Basle-County, in Switzerland, when he made the discovery in September 2021.

His metal detector suddenly started picking up a strong signal and after a little digging, he uncovered the hoard of over 1,200 ancient Roman coins dating back to between 332 and 335 AD.

Zenger News obtained these images from Archaeologie Baselland showing his incredible find, including a 3D render of the coins, which are being studied by a team of experts.

The discovery has just been revealed by Archaeologie Baselland, who said that as soon as Luedin realized the importance of his find, he carefully covered up the coins he had unearthed with some pottery fragments and contacted them to report it.

Andreas Fischer, of Archaeologie Baselland, said in a statement obtained by Zenger News: “After recovering several Roman coins and fragments of pottery, the full extent of his discovery became apparent: a hoard of coins that had been buried in a pot came to light.

“Daniel Luedin acted very carefully. He covered the find again and informed Archeologie Baselland. Thanks to this professional approach, an excavation team from Archäologie Baselland was able to salvage the pot in one piece.”

Experts have since been studying his discovery, notably at the Swiss Federal Laboratories for Materials Testing and Research (EMPA) in Duebendorf, which is a municipality in the Swiss canton of Zuerich, using computer tomography and a powerful X-ray.

They revealed that the coins in the pot had been separated in two by a piece of cowhide at the time of their burial, although it is currently unclear why and what purpose this served. Fischer said: “One can only speculate about the meaning and purpose of this separation.”

What is clear, however, is that these coins are made of a copper alloy and of silver, and they were all “minted during the reign of Emperor Constantine the Great (306-337 AD)”.

Fischer said: “The youngest specimens date from the years 332-335 AD.”

The expert said that often, there are simple explanations as to why people would bury their valuables, but none of them appear to apply here.

He said that often during that era, “people buried their valuables in the ground to protect them from unauthorized access” during “troubled times” that were plagued by “civil wars, incursions by neighboring ethnic groups or economic crises”.

But he also said that “there are hardly any comparable hoards in the entire Roman Empire dating back to the time when the Bubendorf pot was hidden” because the exact years matching when the coins were buried were instead “characterized more by their political stability and some economic recovery”.

Fischer added: “On the one hand, this makes the find very special, but on the other hand it poses further mysteries.

“For what reasons were the coins buried and why weren’t they recovered? In addition to personal, no longer comprehensible motives, the find site could provide clues for an explanation: this is in the border area between three Roman estates.

“Who knows, maybe the coins were kept here in a kind of border sanctuary or sacrificed to the gods.”