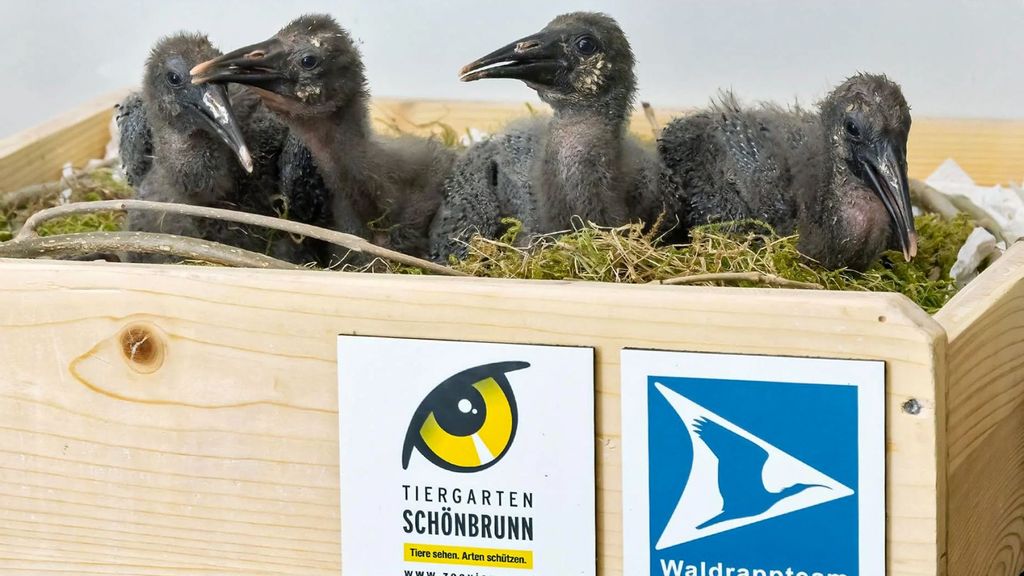 The northern bald Ibis chicks moved from the Rosegg zoo in Carinthia to the Schonbrunn zoo in April 2022. (Daniel Zupanc/Zenger).

The world’s oldest zoo will provide care for over 30 endangered northern bald ibis chicks as part of a programme to lead them back to their natural habitat using a microlight glider.

The young birds, which were settled next to the northern bald ibis aviary, will be raised by their two human foster mothers, Helena Wehner and Lisa Kern, from the Vienna zoo.

Helena told Zenger News: “The supervised rearing requires a lot of effort, because the chicks have to be fed regularly every day between 7 am and 9 pm. We also spend as much time as possible with the young birds between feedings.”

The northern bald ibis specialist explained: “In this way we build a close relationship with the chicks and they consider us as reference persons.”

This allows the birds to identify with the humans as if they were parents and to then follow them when migrating.

Helena said: “That is crucial so that they follow us later.”

According to the zoo, the birds will be taught how to fly and brought to Lake Constance – at the meeting point of Germany, Switzerland and Austria – when they turn 35 days old.

Lake Constance – which is the third-largest freshwater lake by surface area in Central and Western Europe, after Lake Geneva and Lake Balaton – will later become their breeding ground, said the zoo.

The zoo said: “In August, the foster mothers will fly with their proteges in ultralight aircraft to their winter quarters in Tuscany. When they become adults in 2-3 years, the birds will find their way back to their breeding grounds on their own.”

Project managed Bernhard Goenner said: “The northern bald ibis became extinct in Europe around 400 years ago. Its reintroduction is one of the most exciting species protection projects. Schoenbrunn Zoo has been involved in the rescue of this highly endangered bird species for 20 years now and took over the management of an EU-funded LIFE project at the beginning of 2022.”

The species has been listed as ‘endangered’ on the International Union for Conservation of Nature Red List since 2018, after a reintroduction program called the Waldrappteam project, helped to downlist the species from ‘critically endangered’.

Reports state that there are approximately 200 northern bald ibises currently living in Central Europe. The aim of the programme is to increase their population so they can survive in nature on their own again.