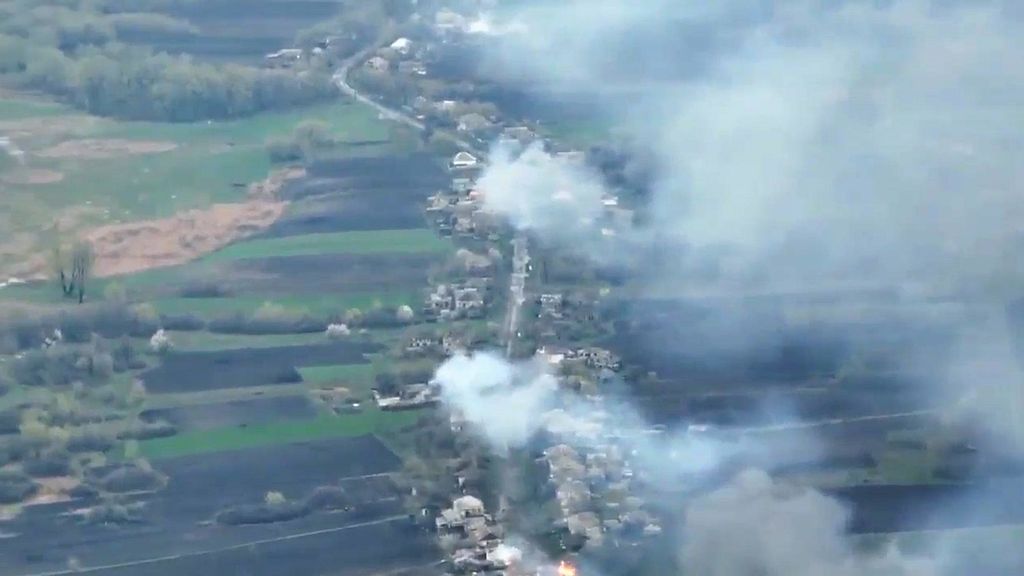 Explosion of the Russian Tank after being attacked by the Ukraine armored personnel carrier in April 2022. (General Staff of the Armed Forces of Ukraine/Zenger).

These images show a Ukrainian armored personnel carrier apparently facing down a Russian tank – and winning.

The footage, which appears to have been shot from a drone, seems to show a Russian tank in the centre of the screen opening fire on an unseen Ukrainian armored personnel carrier, hidden from view by some trees.

The armored personnel carrier appears to return fire with a heavy machine gun against the tank, which is located in a small village, with houses along the road on either side also suddenly exploding.

It is possible that the armored personnel carrier may have hit the tank’s ammunition storage compartment but this was not confirmed.

Zenger News obtained the images from the General Staff of the Armed Forces of Ukraine, who said: “Russian tank against Ukrainian armored personnel carrier. Who do you think won in their homeland?”

Zenger News has not been able to independently verify the images and it is currently unclear where exactly in Ukraine they were filmed, but Russian ground forces are reported to have withdrawn from northern Ukraine.

It is believed this is to redeploy and attack the eastern regions of the country in a massive push that is expected to begin in the coming days, and is set to significantly increase the Russian presence in the area.

Meanwhile, Ukrainian forces are reportedly still battling Russian military forces in the eastern city of Mariupol, which has been besieged for weeks. The Kremlin has claimed that over 1,000 Ukrainian troops have surrendered there and that it is now in control of the city. But Ukrainian authorities deny this.

The UK Ministry of Defence (MoD) said on Thursday, 14 April: “President Putin’s speech on Tuesday highlighted his continued interest in the Donbas where Russia is striking Ukrainian forces in preparation for a renewed offensive.

“Urban centres have faced repeated indiscriminate attacks from Russia throughout the conflict. The towns of Kramatorsk and Kostiantynivka are likely to be Russian targets for similar levels of violence.”

The UK MoD added: “The combination of widespread missile and artillery strikes and efforts to concentrate forces for an offensive represents a reversion to traditional Russian military doctrine.

“However, this will require significant force levels. Ukraine’s continued defence of Mariupol is currently tying down significant numbers of Russian troops and equipment.”

The Ukrainian state news agency Ukrinform, citing a “combined report by the regional military administrations” has said that as of 8am this morning (Friday, 15 April), “a number of blasts were reported in the Vasylkiv district, in the Kyiv region”, adding that “residential neighbourhoods in the Kharkiv region came under the Russian fire, while hostilities are ongoing along the entire front line in the Donetsk region.”

Ukrinform also said: “In the Kyiv region, explosions were heard in the Vasylkiv community. According to preliminary data, it was Ukraine’s air defence hitting incoming missiles.

“In Kharkiv, shelling of residential neighbourhoods continued, where several fires broke out overnight. Throughout the day, the invaders opened fire on Zolochiv and Derhachi, where casualties are reported. There are battles underway in the Izium direction.”

Izium is a city on the River Donets in the Kharkiv Oblast region, in eastern Ukraine.

The move comes after the US promised a further USD 800 million in weapons, with Ukrainian President Volodymyr Zelenskyy saying that he was “sincerely thankful” to the Americans for their military support.