The Russian video shows a large drone powering up and taking off from what appears to be an airfield at an undisclosed location.
By Joseph Golder April 15, 2022
Facebook
Twitter
Linkedin
Email 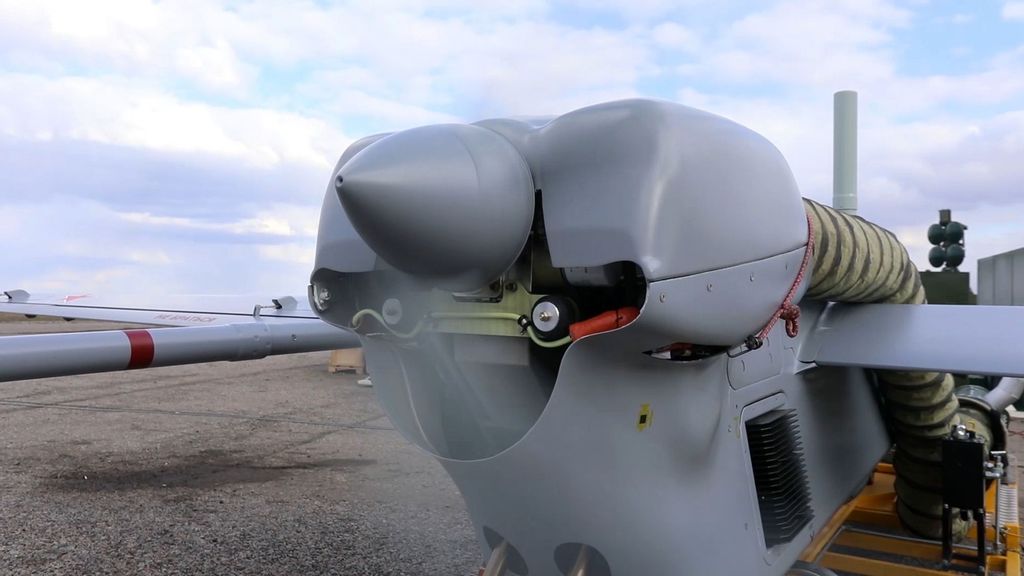 The calculation of an unmanned aerial vehicle destroyed a column of military equipment of the Armed Forces of Ukraine in April 2022. (Ministry of Defense of Russia/Zenger)

Kremlin officials have claimed that this drone helped pinpoint a column of Ukrainian forces for ‘high precision’ artillery fire.

The Russian video footage shows a large drone powering up and taking off from what appears to be an airfield at an undisclosed location.

The footage repeatedly cuts to a man whose face has been blurred and who appears to be operating the drone remotely.

The footage then cuts again for a few seconds and shows what appears to be military vehicles moving on the ground.

It cuts back to the operator before again cutting to what appears to be aerial footage showing a forested area, presumably containing unseen military vehicles, being hit.

Zenger News obtained the images from the Russian Ministry of Defense (MoD) along with a statement earlier this morning, on Friday, April 15, that credited the “calculation of an unmanned aerial vehicle” with allowing them to destroy “a column of military equipment of the Armed Forces of Ukraine”.

Zenger News has not been able to independently verify the images or the Russian MoD’s claims.

The Russian MoD also said in its statement: “During the performance of the flight task, the UAV crew discovered a column of military equipment of the Armed Forces of Ukraine, which was making a march.

“The coordinates of the detected targets were transmitted in real time to the command post, after which the military equipment of the Armed Forces of Ukraine was hit by high-precision weapons.”

The statement also quotes a man named only as “Andrey, head of the UAV crew”, as boasting: “We carry out the tasks of aerial reconnaissance, escort of equipment, strike tasks, since our complex has suspension points and can strike, and correct artillery fire.

“Interaction is carried out either on pre-given targets, or in free hunting, that is, we find the points with a concentration of enemy equipment and give coordinates to headquarters, after which either strikes or further observation is carried out on them.

“Prior to this, the complexes were used in Syria and also showed themselves perfectly up to the job. Now they are being upgraded and improved. Their potential is great and will be slowly confirmed over time.”

The Russian MoD statement also said: “Unmanned aerial vehicles in a special military operation carry out reconnaissance, fire adjustment, as well as control the use of combat weapons against targets.”

The images were also carried by Russian state media, which followed the Kremlin line.