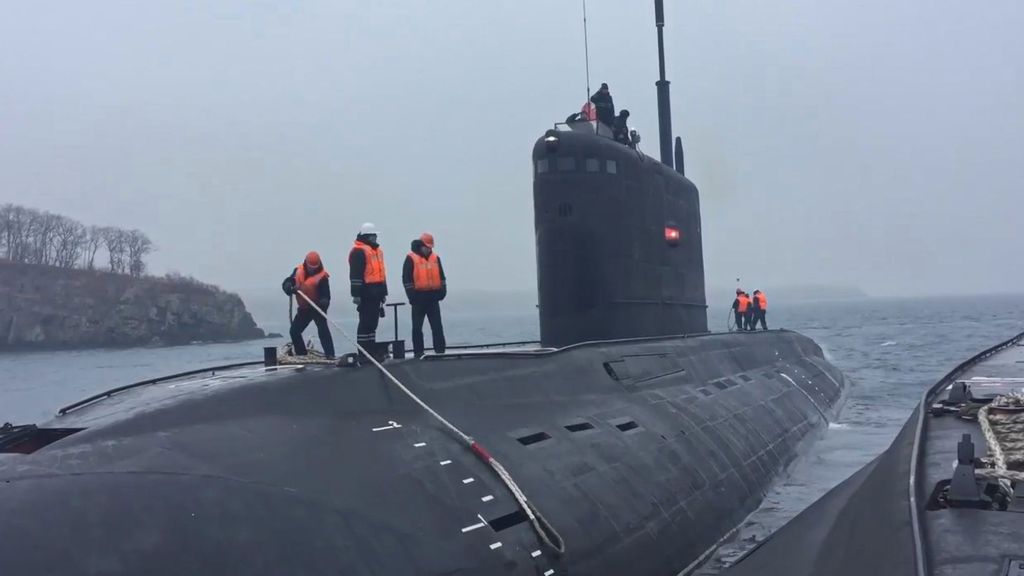 Submarines of the Pacific Fleet conducted launches of cruise missiles 'Caliber' on the ships of a mock enemy in April 2022. (Ministry of Defense of Russia/Zenger)

Russia has upped international tension after claiming to have test-fired cruise missiles from submarines off the coast of Japan.

The Kremlin’s footage of the “mock attack” shows Russian submariners leaving an unnamed port and preparing for the operation.

The footage – claimed by Moscow to have been filmed in the Sea of Japan – then shows Kalibr missiles soaring into the sky.

It ends – in an apparent warning to Western ally Japan – with a sailor’s thumb hovering over the ‘Fire’ button.

Tokyo has angered the Kremlin with its backing of Ukraine and NATO by banning Russian coal imports, expelling eight Russian diplomats, and accusing Moscow of war crimes.

Moscow claimed that the Sea of Japan operation was a success and that “mock enemy” targets were destroyed.

Zenger News obtained the images and a statement from the Russian Ministry of Defense (MoD) earlier today (Thursday, April 14).

The Russian MoD stated that its submarines “of the Pacific Fleet conducted launches of Kalibr cruise missiles on the ships of a mock enemy”.

The threat seems similar to one deployed by Russia against Finland last week when Moscow moved a missile system to their joint border.

The Japanese government – which has followed a pacifist policy since World War II – now says it needs to bolster its defense policies and not simply rely on its alliance with the USA.

These moves have reportedly angered Moscow, with the Kremlin pulling out of stalled peace talks with the East Asian country, a US ally since the end of World War II.

The Russian MoD also said in its statement: “Two of the latest diesel-electric submarines of the Pacific Fleet, the Petropavlovsk-Kamchatsky and the Volkhov, launched Kalibr cruise missiles from a submerged position at a sea target in the Sea of &ZeroWidthSpace;&ZeroWidthSpace;Japan.”

It also said: “Practising practical actions, the submarines overcame a conditional anti-submarine line created by the forces of a conditional enemy, and went to a given area, from where they launched a missile attack on a target position.

“The cruise missiles successfully hit the target – a special naval shield that imitates the surface ship of a mock enemy.

Japan, while not a member of NATO, is closely engaged in cooperation with the Western Alliance.

NATO says on its website, last updated on Monday, April 11, that “NATO and Japan are committed to strengthening relations to address shared security challenges.

“The practical cooperation includes areas such as maritime security, cyber defense and non-proliferation.”

NATO also said: “Japan is one of a number of countries beyond the Euro-Atlantic area – often referred to as ‘partners across the globe’ – with which NATO is developing relations.”