The police said in a statement that they had arrested three people in Navarre and were investigating two others in Basque Country.
By Joseph Golder April 15, 2022
Facebook
Twitter
Linkedin
Email 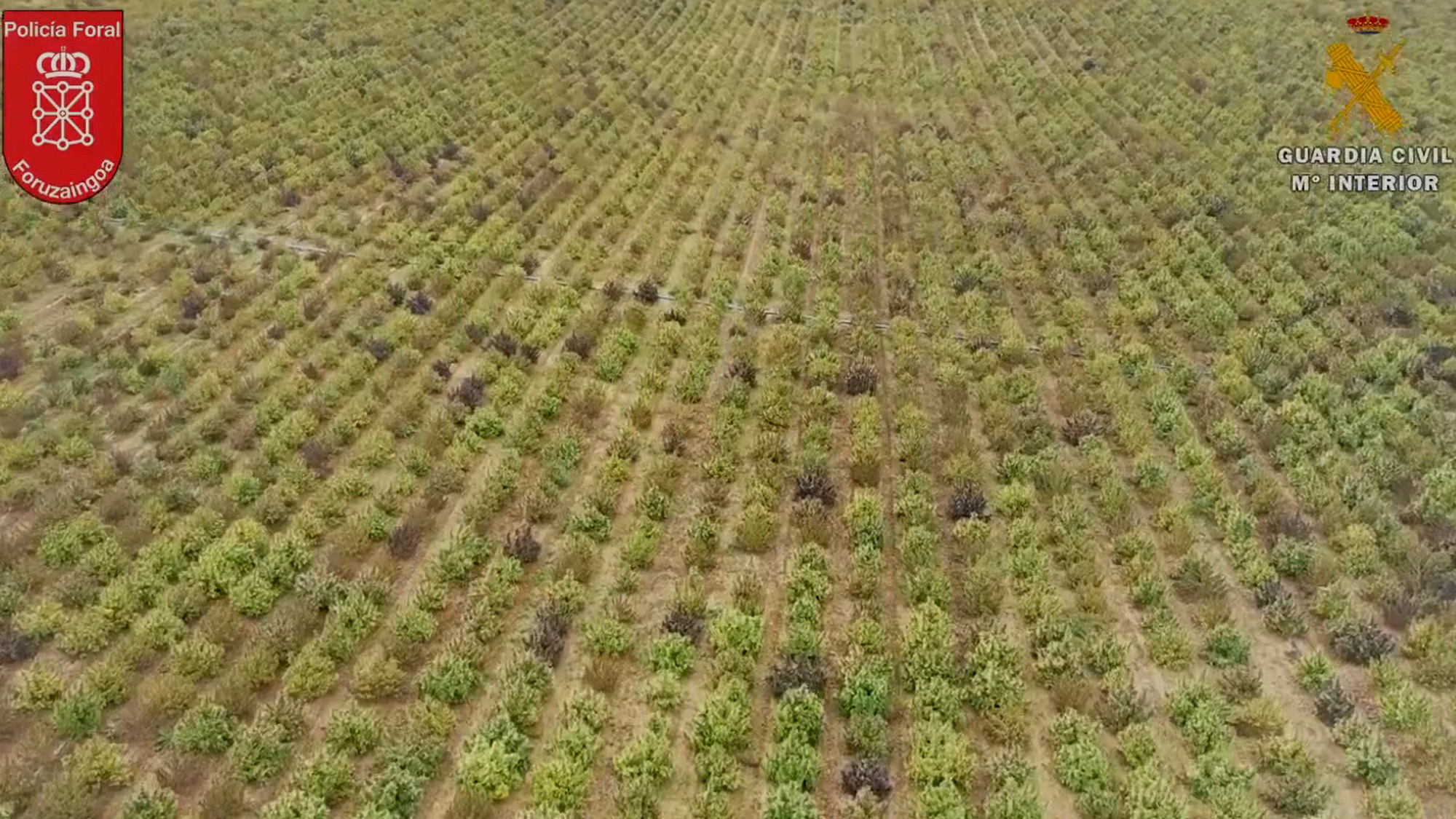 Police dismantled in Navarra, Spain, the largest marijuana plantation in all of Europe, with almost 400,000 plants and valued at EUR100 million, in April, 2022. (Zenger)

Police in Spain have destroyed what they said was Europe’s largest cannabis plantation believed to have been worth over 100 million dollars and which included over 415,000 plants.

The footage shows cannabis plants as far as the eye can see, all in a massive field perched on top of a hillside and growing neatly in rows in open view, with the police saying that it was one of 11 farms located in Artajona and Olite, both of which are towns in the northern Spanish province of Navarre.

The police said in a statement obtained by Zenger News that they had arrested three people in Navarre and were investigating two others in the Basque Country.

The Spanish Civil Guard, along with their local colleagues from the Policia Foral, the police force in Navarre, said that with the successful completion of the operation they had dismantled the largest cannabis plantation in Europe, adding that the plants were “cannabis sativa, destined for drug trafficking”.

The police said: “The investigation began in the middle of last year when an agent discovered a large hemp plantation of questionable legality. At the time, investigations began between the two police forces in the towns of Artajona and Olite, where they found 11 hemp farms with some 415,000 plants and occupying an area of &ZeroWidthSpace;&ZeroWidthSpace;67 hectares.”

The police said that the person in charge of the massive cannabis production fields, who has not been named, claimed that they were legal, saying they were destined for the CBD industry in countries including Switzerland and Italy, places which they said are “known for the processing of plants for the production of CBD-derived products.”

But the police said that this “activity is prohibited in Spain”.

Cannabis plants containing less than 0.2 percent THC (Tetrahydrocannabinol), which is the psychoactive compound that makes cannabis users feel “high”, are legal in the European Union, and this is essential for the growing CBD market.

But Zenger News contacted the Spanish police for comment and they said: “The crop had a THC level of 0.5 percent.”

They added: “Even if it had had 0.1 percent THC, it would still have been illegal under Spanish law, as its purpose was not the one documented.”

The police also said that over the course of the investigation, they had discovered that a lorry loaded with dried cannabis plants was about to leave for Italy, so they intercepted the cargo. They said that in that lorry alone, they had seized “some 23,000 cannabis plants”.

They said they also found another 13,000 cannabis plants in the process of being dried, and which yielded a total weight of over 50 tonnes. They said that the plants were destroyed.

They added: “Subsequently, the rest of the plants that were still growing, some 375,000 more were cut down and destroyed.”

The police said: “In total, 415,000 cannabis sativa plants have been seized, three people have been arrested in Navarra and another two have been investigated in Bizkaia”, also known as the Spanish Province of Biscay.