The footage shows two members of the Turkish Coast Guard assisting the tired turtle and helping to hoist it into a dinghy.
By Feza Uzay April 15, 2022
Facebook
Twitter
Linkedin
Email 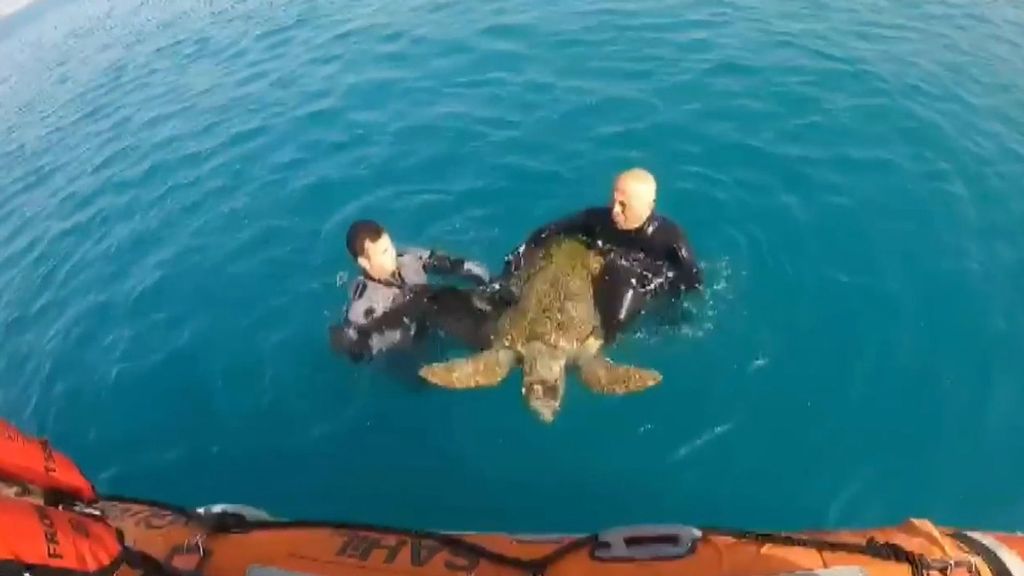 A loggerhead sea turtle, which was found to be exhausted and weak in Limak Port in Hatay, Turkey, was rescued by the Turkish Coast Guard Command teams on 12th April 2022. (@t.c.sahilguvenlik/Zenger)

This footage shows the coast guard rescuing a large, rare, protected sea turtle after it was found at sea in a weak and exhausted state.

The footage shows two members of the Turkish Coast Guard assisting the tired turtle and helping to hoist it into a dinghy.

Zenger News obtained the images, along with a statement, from the Turkish Coast Guard Command. They said: “A Loggerhead sea turtle that was found in an exhausted and weak condition at Iskenderun Limak Port, was rescued by the Coast Guard’s Iskenderun Group Command team and handed over to the Hatay Nature Conservation and National Parks Directorate officials to be treated.”

Iskenderun is a port city historically known as Alexandretta that is located in Hatay Province on Turkey’s Mediterranean coast, near the border with Syria. It was built to commemorate Alexander the Great’s victory over the Persian ruler Darius III at Issus in 333 BC.

The exhausted sea turtle, which the coast guard also said was “ill”, was spotted in the Gulf of Iskenderun, which is one of the most important reproduction areas for the species in the Mediterranean Sea, on Tuesday, April 12.

After being rescued by the coast guard, the loggerhead sea turtle was handed over to officials at the Hatay Nature Conservation and National Parks Directorate to be treated.

The coast guard was alerted after the distressed turtle was spotted and they set out to rescue it. As can be seen in the video footage, during the rescue operation, two divers helped the turtle into a dinghy, while other members of the team can be seen in the dinghy, helping to hoist the tired marine reptile aboard.

Loggerhead sea turtles (Caretta caretta), which are thought to have existed for about 106 million years, are usually quite large and weigh around 300 lbs, with the largest ones weighing up to 992 lbs.

The Loggerhead sea turtle is also a protected species, listed as “vulnerable” on the International Union for Conservation of Nature’s (IUCN) Red List of Threatened Species (also known as the IUCN Red List or Red Data Book).

The sea turtle’s current condition is unknown but it is believed that it is being treated with a view to releasing it back into the sea once it has recovered from its ordeal. It is currently unclear why the turtle was found in such an exhausted state, how it became ill and what illness is affecting it.