Eugene Cronley, from the city of Brandon, caught the 131-lb whopper in the Mississippi River on April 7th.
By Darko Manevski April 15, 2022
Facebook
Twitter
Linkedin
Email 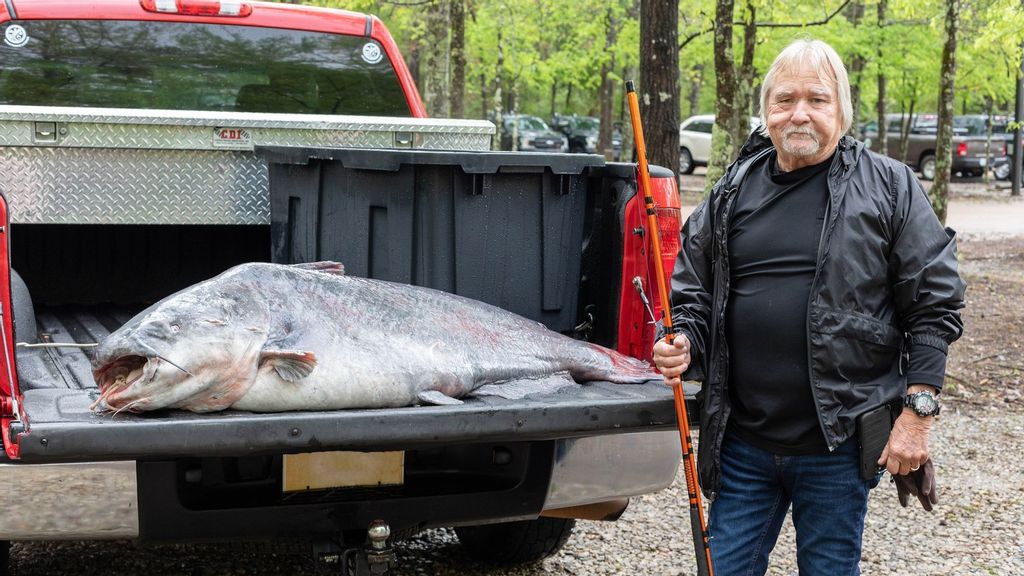 Angler Eugene Cronley caught the 59 kilogramme fish, both pictured, on 7th April,2022, in the Mississippi River near Natchez, Mississippi. (@mdwfp/Zenger)

A Mississippi angler has netted the biggest blue catfish in the state’s history, smashing previous records.

Eugene Cronley, from the city of Brandon in the state of Mississippi, caught the 131-lb whopper in the Mississippi River on April 7th.

In a statement obtained by Zenger News, the Mississippi Department of Wildlife, Fisheries, and Parks said this week that they have confirmed a new state record for a blue catfish.

“Eugene Cronley, the lucky angler from Brandon, caught the 131-pound fish on April 7, 2022 from the Mississippi River near Natchez. Mr. Cronley said that it took him forty minutes to land the huge fish.”

Cronley said: “It is truly a fish of a lifetime.”

The Mississippi bureau said the blue catfish broke the previous rod and reel record from 2009 as well as the trophy record from back in 1997.

The statement said: “The fish shattered the previous rod and reel record of 95 lbs. caught by Dakota Hinson in 2009 and is larger than the trophy record blue catfish of 101 lbs. caught by the team of Freddie Parker and Brad Smith in 1997.

“Interestingly, both of those fish were also caught from the Mississippi River near Natchez.”

The Mississippi Department of Wildlife, Fisheries, and Parks Fisheries Bureau added: “Mr. Cronley caught the fish with a rod and reel using skipjack herring as bait.”

The typical length is about 25–46 in (64–117 cm) and the blue catfish is mainly found in the Mississippi River drainage, including the Missouri, Ohio, Tennessee, and Arkansas Rivers.

They have also been introduced in a number of reservoirs and rivers, notably the Santee Cooper lakes of Lake Marion and Lake Moultrie in South Carolina, the James River in Virginia, Powerton Lake in Pekin, Illinois, and Lake Springfield in Springfield, Illinois.

It is also found in some lakes in Florida and is often considered an invasive pest in some areas, particularly the Chesapeake Bay.

And on February 7, 2012, a 136-lb blue catfish was caught on a commercial-fishing trot line in Lake Moultrie, one of the two Santee Cooper lakes, near Cross, South Carolina.