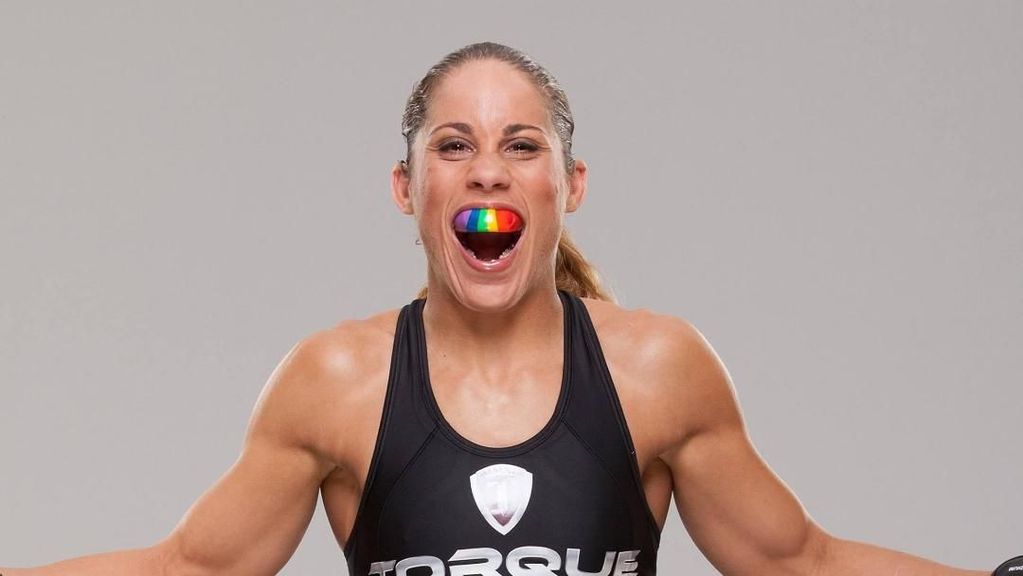 Liz Carmouche gets a title shot April 22 against Juliana Velasquez at Bellator 278 in Hawaii. (Courtesy of Liz Carmouche)

SAN DIEGO — Perhaps Liz Carmouche was unaware of the impact she and Ronda Rousey had in February 2013, when they became the first female fighters to set foot inside the UFC Octagon. (Rousey won that bantamweight championship bout.) Not only did that fight make history, but it also provided a platform for female fighters across the board to broadcast their talents.

Carmouche, now with Bellator MMA, is on a mission to capture a title that has eluded her throughout her career. A winner of five of her last six fights, while being undefeated in three bouts under the Bellator banner, Carmouche has the opportunity to finally be crowned champion on April 22 in Hawaii against Juliana Velasquez.

Known as “Girl-Rilla” for her imposing fighting style, Carmouche has 25 minutes or less to get the monkey off of her back, pun intended. Showtime will be the platform to host Bellator 278. Carmouche plans to use the top billing to showcase her hard work, while being draped with the title at night’s end.

Zenger News caught up with Carmouche to discuss her title opportunity, how the change in organizations enhanced her performances, and much more.

Zenger: How is training going for your fight against Juliana Velasquez?

Carmouche: It’s been going great. I had gotten rumors of a fight in August, so I started fight camp in September in anticipation of fighting in December. It just keeps getting pushed [back], so I got more and more time to prepare and picture the outcome.

Zenger: Often times postponements could be viewed as a setback or disappointment. It sounds like you have been able to channel that into something positive.

Carmouche: Exactly right! Of course, it’s a disappointment because I really wanted to fight in December, but that just gives me more time to prepare, and know that all the things I’m doing correctly is setting me up for success.

Zenger: You will be fighting for a world title at age 38. Would you credit your mental toughness and conditioning as the keys to success when most fighters start to hit a decline at this age?

Carmouche: Absolutely! I think I chalk it up to mental more than everything. That’s helped me push to keep my conditioning, to recover the right way&mldr;  it’s really my aptitude for this sport. It helps me understand what I need to do to be the best me.

Zenger: It’s been a while since you’ve had to fight a full 25 minutes. Do you feel you have done the necessary things to make sure that won’t be a factor?

Carmouche: Absolutely! Even though I haven’t necessarily been in the cage for that long since the Valentina Shevchenko fight in 2019, I’ve helped other people prepare for it. So, that means I always have to be in that shape. Even though I haven’t been in the cage for five rounds in the last 3 years, I’ve put in more than that over that time helping other people prepare for their championship fights.

Zenger: What are your thoughts on Juliana Velasquez as a fighter and a champion?

Carmouche: I respect everything that she’s accomplished, but I don’t see her as a well-rounded MMA fighter. I think she has her strengths. She’s very elusive with her striking and judo, but that’s all I see that she has to offer. Nobody has really seen what she has on the ground. I’ve certainly seen some of her opposition who have wanted it on the ground, so I don’t think she has a lot of confidence there. That’s not necessarily where I want to face her, but I would accept that opportunity. I would love to showcase all of my striking and take advantage of that there. As a full MMA fighter, I don’t think she’s there. She’s great in some areas but not all around.

Zenger: You really had your right hand going in your last fight against Kana Watanabe. You knocked her out in under 40 seconds. Do you feel the most important aspect of your game to capture that title is to mix up your striking with your wrestling and not be predictable?

Carmouche: I definitely think being unpredictable is what’s going to win this fight. Being able to have an answer for every place that it goes, and her just not knowing how to face somebody like me.

Zenger: You had an amazing run in the UFC, but you have been nothing short of spectacular since entertain Bellator MMA. Do you think the change of scenery was necessary?

Carmouche: It was a few things. I do think I just needed a different environment. Bellator made a promise where they guaranteed me a minimum of two fights a year, and they stuck to that word. In the UFC it was kind of hard. I was told, “Oh, you’re going to get a fight,” and then I get postponed for a year. It’s not because I’m injured — I’m just waiting for a fight. And then having to brush off that rust all the time.

Bellator has kept me busy and that’s the type of fighter I need to be. Those opportunities have helped me. And also, being able to learn from all the lessons and mistakes I have had in my career, better understanding myself, evolving through it, and then really focusing, honestly selfishly on what I need to do to succeed.

Zenger: What would it mean to you at this stage to have Bellator President Scott Coker wrapping that title around your waist on April 22?

Zenger: I would imagine there would be no better way to start 2022 off by winning the title in the first quarter of the year. In a perfect world for you, how does this fight end?

Carmouche: In a perfect world, I see it ending in a TKO [technical knockout]. I see my elbows and my punches being too much for her to handle, and the ref having to yank me off because I just won’t stop.

Zenger: To have the Showtime platform to showcase your talents, how major is that in the grand scheme of things?

Carmouche: It’s been awesome because Showtime is where I started when I was with Strikeforce. To come full circle and have the chance to showcase with them is a huge honor.

Zenger: For anyone who has never experienced a Liz Carmouche fight, what are they in for on April 22?

Carmouche: They can expect a really strong finish with my hands in the air and that belt strapped around my waist.

Zenger: Best of luck to you, Liz. I’m looking forward to the fight. Is there anything you would like to add before I let you go?

Carmouche: I just want to say thank you to everyone that’s been supporting [me]. I can’t wait to show you everything that I’ve been working on, on April 22.

«Previous Post
Together Again: Derrick James Will Be In Errol Spence’s Corner For Title Bout»Next Post
Boxer Yordenis Ugas Aims To Take Down Another Southpaw