Botch On The Rocks: Two Saved After Battering On Deadly Coast

The footage was filmed at La Aldea de San Nicolas, in the Canary Islands, which are part of Spain.
By Lee Bullen April 15, 2022
Facebook
Twitter
Linkedin
Email 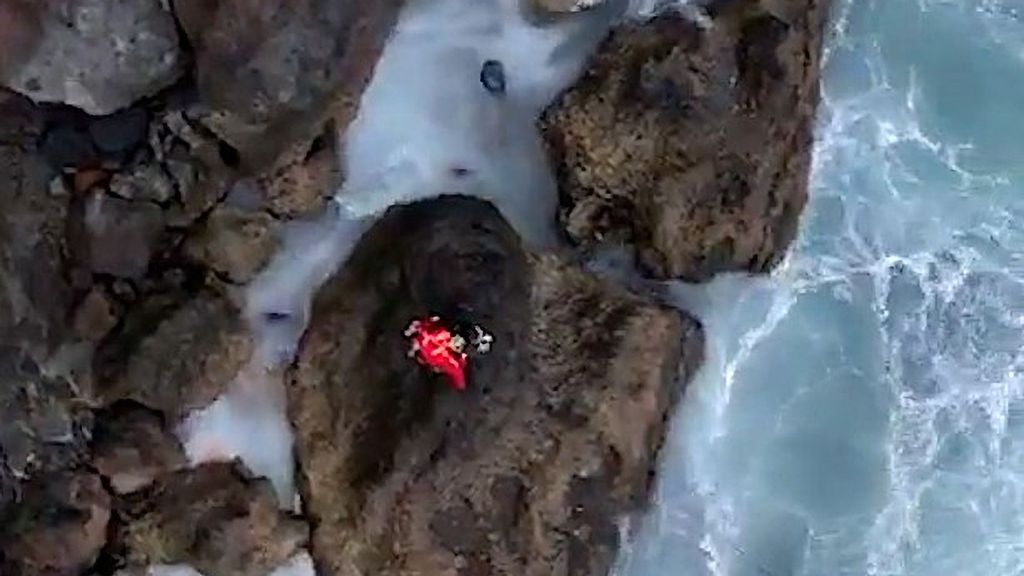 Two men in their fifties were saved by the rescue team with a helicopter on the coast of La Aldea de San Nicolas in Gran Canaria, Canary Islands on 13th April 2022.(@112canarias/Zenger).

Nail-biting footage of the rescue of two men as they are battered against jagged rocks on a holiday island coastline has emerged from helicopter rescue officials.

The desperate struggle to save the men – both aged in their 50s – from the coast of Gran Canaria reveals how close they came to death.

One of the pair is seen being repeatedly pounded against the rocks by powerful waves as rescuers try to pull him in.

Eventually, the exhausted swimmer is hauled up the rocks with emergency workers grabbing one leg and an arm.

The second man – stranded on a tiny piece of rock by a cave – is winched to safety into a helicopter by the Canary Island Government’s Emergency and Rescue Group (GES).

The pair had apparently unwittingly swum into a deadly combination of a rising tide and a deadly coastline.

The footage was filmed at La Aldea de San Nicolas, the westernmost municipality on Gran Canaria in the Canary Islands, which are part of Spain.

Local officials said the men were stranded in an area with difficult access by land and had to be airlifted to safety by helicopter.

One man was struggling against the rocks while the other was trapped in a cave filling rapidly with water after the tide came in, according to the rescue team.

Zenger News obtained the images from the Canary Islands Emergency Services on April 13 along with a statement saying: “The rescue of two men, about 50 years old, was carried out this morning by the GES helicopter on the coast of La Aldea de San Nicolas in Gran Canaria, in an area with difficult access by land near Las Arenas Beach.”

Both men were taken to hospital with numerous cuts and bruises as well as signs of hypothermia and exhaustion.

They are reportedly still being treated at the University Hospital of Gran Canaria Dr. Negrin in the island’s capital Las Palmas de Gran Canaria.

The Canary Islands have been under a weather warning recently due to a storm with Lanzarote, Gran Canaria and Fuerteventura the worst hit.

The storm warning was issued by AEMET, which is Spain’s meteorological agency.

Tenerife was also hit by wind and rain but it was less intense than the other islands.

The storm is part of a general trend of bad weather across southern Spain recently, with heavy downpours across the Costa del Sol and Costa Blanca.

Tourists and residents had to deal with heavy rainfall and strong winds and even, in some areas, a calima, which is a dust storm that forms when sand from the Sahara travels on the wind to Europe.

Some residents in the Balearic islands even awoke to snow on April 1 as Storm Cyril hit the region.

The Asturias, Cantabria, the Basque country, Navarra and La Rioja were also hit by heavy snow.

Spain is currently preparing for a busy tourist season as many visitors are expected to arrive over Easter.