Zoo Made It! Worlds Oldest Gorilla Celebrates Her 65th Birthday 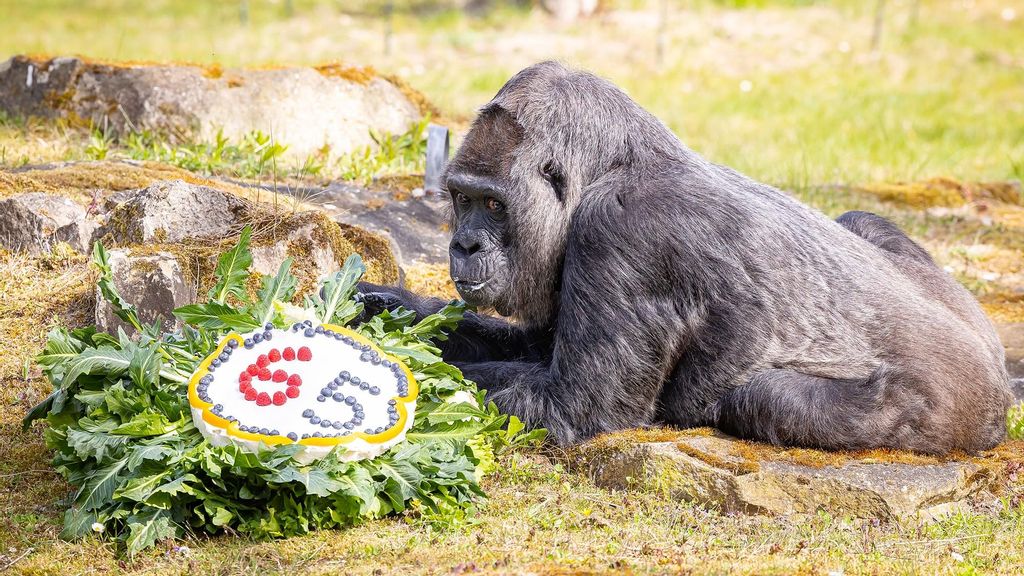 Fatou, the oldest female gorilla in the world, is celebrating her 65th birthday at Zoo Berlin, in Germany, in April, 2022. (Berlin Zoo/Zenger)

The world’s oldest female gorilla celebrated her 65th birthday with a version of the Great British Ape Off.

Living legend Fatou tucked into a special birthday cake made from rice and fruit.

And at 65, she is entitled to take it easy now she has reached the retirement age of her adopted homeland, Germany.

In a statement obtained by Zenger News, the Berlin Zoological Garden said: “Little Fatou came to the Berlin Zoo when she was about two years old.

“She is now celebrating her 65th birthday here, making her the oldest gorilla in the world.

“Her birthday will be duly celebrated again this year. Instead of fat beats in a club, there is a cozy coffee party in the gorilla family’s front yard – more befitting of an elderly lady.”

Zoo manager Christian Aust said: “The cake base is made of rice, and we used quark, vegetables and fruit for the decoration.

“Despite her exceptionally old age, Fatou is a very vigorous old lady with a healthy appetite.

“We are happy every day that she is with us and hope to be able to celebrate a few more birthdays with her.”

Like humans, gorillas should not eat too many sweet treats. Fruit contains a lot of fructose, which is why vegetables are almost exclusively on the menu.

The zoo said: “At 65, Fatou is the world’s oldest gorilla. Her exact age is unknown, because according to tales, she came to Berlin in 1959 through strange circumstances:

“After a sailor used the little gorilla as a means of payment at an inn in Marseille, France, she finally ended up in the Berlin Zoo via a detour.

“At the time of her arrival, Fatou was estimated to be two years old. The gorilla lady has lived in the zoo for over 60 years and is one of the most prominent residents.

“However, Fatou is not the oldest animal in the Berlin Zoo. A flamingo named Ingo came to the zoo as a young animal in 1948 and is now at least 71 years old.

“As one of the oldest, Fatou is one of the few animals in the zoo that came from their natural habitat. In the meantime, almost all zoo and animal park animals were born in zoological institutions.

“While it was still normal in the 1950s and 1960s to bring animals from their natural habitat to a zoo, today the principle of the zoo as an ark works in exactly the opposite way. In some cases, animals that were once extinct in the wild, such as bison, Przewalski’s horses and similar, can be returned to their natural habitats with the help of zoological gardens.”