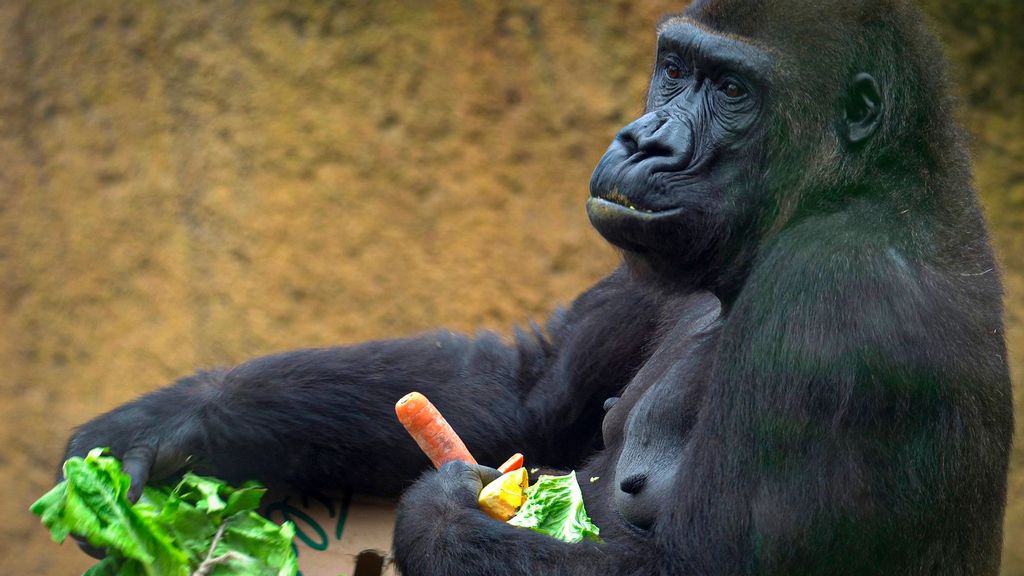 It was a double celebration complete with birthday gifts for two members of the Gorilla family at a Spanish zoo recently.

Visitors watched as a birthday pair and other members of the troop of gorillas tore into colorfully-wrapped gifts of tasty fruit and vegetables in a dual birthday celebration at the Bioparc Valencia, on Spain’s eastern coast.

An extended family of the world’s largest apes at the zoo includes silverback male Mambie, adult females Nalani, Ali and Fossey, as well as youngsters Ebo, Felix, Virunga and Pepe.

The latter four were born at the park.

Visitors and staff at the zoo were marking Nalani’s 16th birthday, while Felix’s third birthday came on almost the same date.

Felix bears the name of Felix Rodriguez de la Fuente, a Spanish pioneer of nature documentaries who died in a still unresolved 1980 plane crash in Alaska during filming.

At Bioparc Valencia, the gorillas are kept in a naturalistic enclosure, where they have a place to gambol and interact with each other and other apes.

Instead of a traditional cake, the birthday treat featured healthy lettuce and other vegetables.

There were colorful paper garlands as decoration, and gift-wrapped boxes for the gorillas, in what park staff said was an environmental enrichment for the apes.

Human families were on hand to watch the curious apes’ antics, which included tearing into cardboard boxes decorated with fresh veggies.

There were also soap bubbles that were wafted through the enclosure by a breeze, sparking even more simian curiosity.

Nalani, the adult female, munched on carrots and jealously guarded other vegetables against her chest after she tore into a box.

Mambie watched impassively from nearby.

One of the young gorillas raced across the playground wearing what appeared to be a burlap sack, and another pulled a sack over its head, perhaps looking for something else to eat.

In an historic first for the city of Valencia, a baby gorilla was born at the Bioparc in 2012.

Other gorillas have been born there since, and at the BioParc Fuengirola, located further south on Spain’s Mediterranean shore, near the city of Malaga.

According to the World Wildlife Fund, there is no accurate count of western gorillas living in the wild.

However, other sources estimate them to number over 300,000.

The two critically-endangered species, eastern and western, are, in turn, divided into subspecies.

All of them are plant-eaters.

Eastern gorillas are estimated by some to number about 5,000.

Of the primates, gorillas are the next most closely related genetically to humans after chimpanzees and bonobos.

According to the IUCN Red List, four of the six species are critically endangered.