Say It With Flowers: Fly Trapped In Amber While Carrying Floral Gift For Partner Was A Real Love Bug

The new study had been reviewing a block of amber when they discovered the gift-bearing male fly.
By Darko Manevski April 14, 2022
Facebook
Twitter
Linkedin
Email 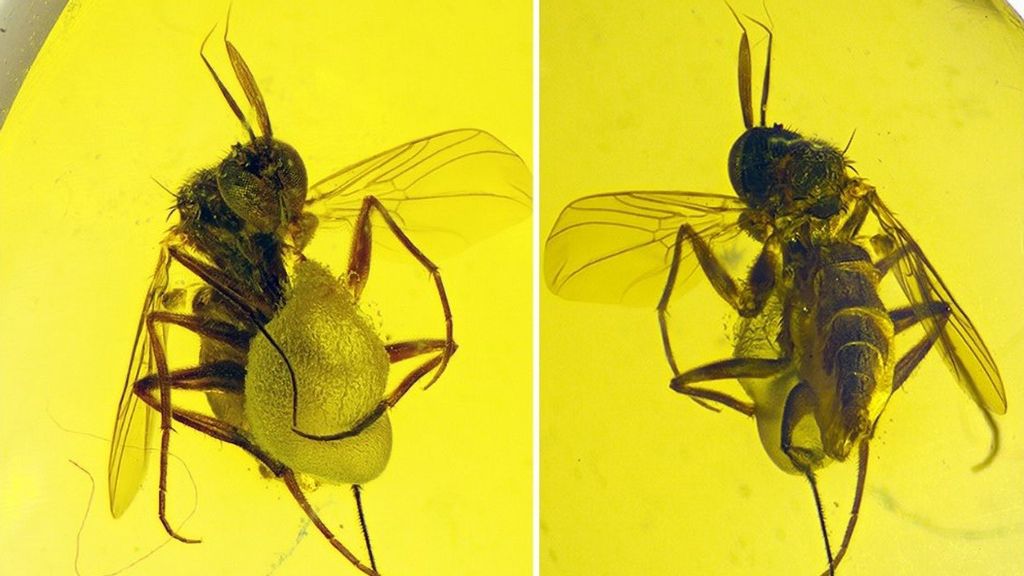 A sex-mad fly trapped in amber 100 million years ago while on his way to tempt a mate with a floral gift has been hailed as the world’s earliest recorded attempt at buying sex with the help of flowers.

The male fly was sealed in tree sap as he carried a frothy balloon – likely to have contained a gift of pollen – on his way to a date.

Now researchers in China and the US have declared the prehistoric love bug the oldest recorded example of insects giving gifts to get at least one of their six legs over.

The new study – by Professor Ding Yang from the College of Plant Protection of China Agricultural University and Professor Michael S. Engel from the University of Kansas – had been reviewing a block of amber when they discovered the gift-bearing male fly.

In the report – to be published in Gondwana Research – they write: “Nuptial gift-giving is one of the most remarkable traits to have evolved among animal mating systems, and has brought about numerous hypotheses regarding their evolution and influence.

“Yet, their study has been confined to the modern fauna owing to their ephemeral nature and lack of traces on the environment suitable for preservation.

“Here we report the first paleontological and earliest evidence of nuptial gift-giving behavior from a male fly of Alavesia (Diptera: Empidoidea) that is an obligate flower visitor in Cretaceous amber carrying his gift, an empty frothy balloon.”

The fly – a regular flower visitor – is likely to have planned to have pollen included in the gift, according to the researchers.

Such a nourishing gift would have made the female more willing to have sex, the study suggests.

But the mid-Cretaceous fly was trapped and preserved in the very act of carrying a breeding gift to his prospective partner.

Empidoidea are one of the most diverse lineages of Diptera, which have long been a model group for exploring the evolution of nuptial gifts, and their many living species present gifts in diverse forms with multiple functions.

The paper added: “The fossil demonstrates the antiquity of this behavior, its occurrence in early diverging lineages of Empidoidea, and its maintenance over 99 million years.

“The nature of the fossil gift provides clues into the function of swarming and the diversity of gifts employed.

“Based on the phylogenetic pattern of feeding and mating traits, it is inferred that the gift initially alleviated nutrient pressure on females and may have been empty and secreted from male salivary glands in the first place, those with prey items inside were derived later.”

The researchers said that the extra nutrition for the female would have likely put her in the mood for sex.