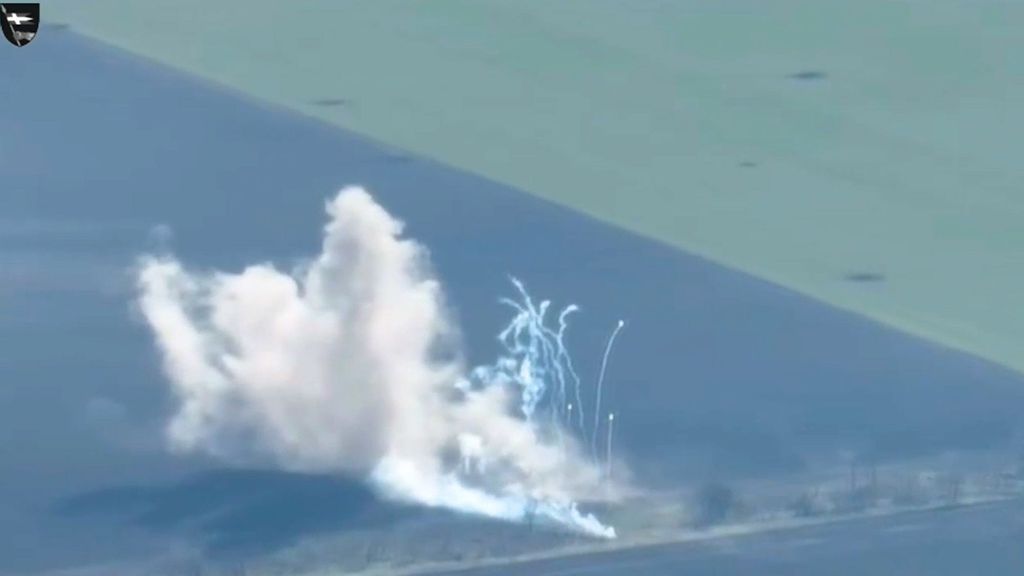 These images show how a drone apparently helped Ukrainian forces to target and destroy a column of Russian military equipment.

Zenger News obtained the images from the 14th Separate Mechanized Brigade of the Ukrainian Armed Forces, named after Prince Roman the Great, on Wednesday, April 13.

The images appear to show Ukrainian ordnance hitting Russian positions. Large plumes of smoke can be seen rising into the sky as a line of Russian military equipment is apparently hit by missiles.

The Ukrainians reportedly used BM-21 ‘Grad’ systems to hit the Russians and were assisted by a Turkish-made Bayraktar TB2 unmanned aerial vehicle (UAV).

The BM-21 ‘Grad’ is a truck-mounted 122-mm multiple rocket launcher that was designed in the Soviet era.

The UAV is said to have assisted them by correcting their aim, as it can target enemy forces from a considerable distance without entering their air defense zone.

It then relays the targeting information to artillery units on the ground, allowing them to strike with greater precision.

It is currently unclear where in Ukraine the images were filmed, and Zenger News was unable to independently verify them, but the 14th Separate Mechanized Brigade is based during peacetime in the city of Volodymyr, in Volyn Oblast, in north-western Ukraine.

Its patron is the medieval ruler Roman the Great (1168-1170), a Grand Prince of Kyiv and a Kievan Rus prince who waged two successful military campaigns against the Cumans, an eastern, nomadic, Turkic people.

The war in Ukraine is intensifying in the eastern part of the country, amid claims from Russia and its Chechen allies that over 1,000 Ukrainian soldiers have surrendered in Mariupol, with Russia claiming to have gained complete control over the besieged city.

But the Ukrainian Ministry of Defense has said that it has no information regarding any surrender, with Ukrainian forces insisting that they are still holding out.

The International Criminal Court’s chief prosecutor, Karim Khan, has labeled Ukraine a “crime scene” amid mounting evidence that Russian war crimes have been committed against civilians in the towns and villages they occupied and which have since been liberated.

The Organization for Security and Co-operation in Europe, one of the world’s biggest regional security-oriented intergovernmental organizations, which has observer status at the United Nations, has also issued a report stating that Russia has committed international human rights violations in Ukraine.