“The research team sampled three species of rays to make comparisons with other populations in the region".
By Lee Bullen April 14, 2022
Facebook
Twitter
Linkedin
Email 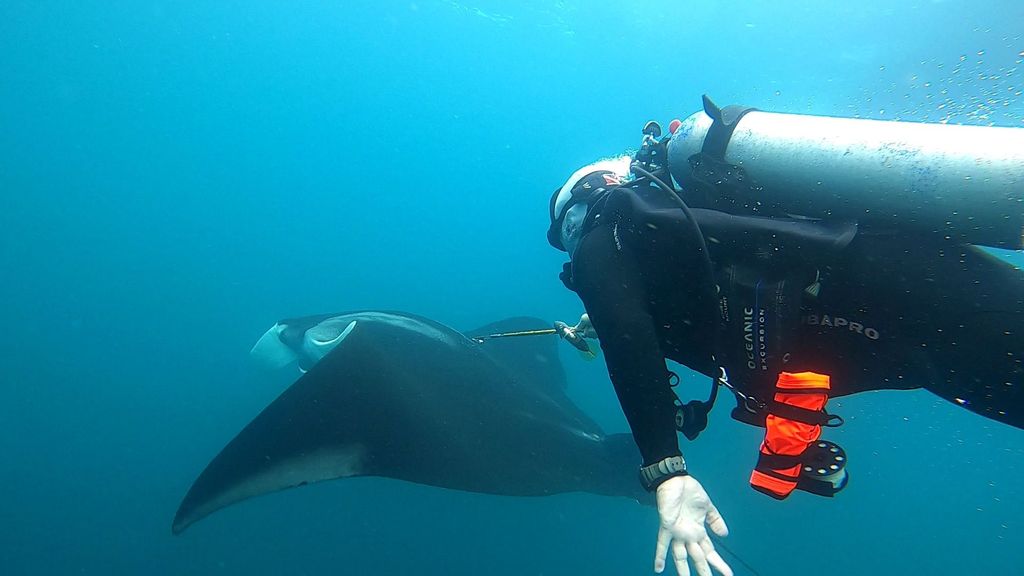 An expedition for monitoring and marking manta rays, aimed at identifying the migration patterns of this species and its abundance index in the area, was carried out by scientists, in the Galapagos Islands, Ecuador.  (Parque Nacional Galapagos/Zenger)

The Galapagos National Park has tagged 10 endangered manta rays with tracking devices to learn more about their migration patterns.

In a statement obtained by Zenger News, the Galapagos National Park, located on the Galapagos Islands, in the Pacific Ocean, which are part of Ecuador, said, on Monday, April 11: “Five technicians and scientists from the Directorate of the Galapagos National Park, University San Francisco de Quito, and Foundation Megafauna Marina del Ecuador performed an expedition of monitoring and marking of manta rays in the south and east of Isabel Island, aimed at identifying the migration patterns of this species and its abundance index in the area.

“Acoustic and satellite monitoring devices will help track these species on the Galapagos Marine Reserve.

“This expedition also managed to identify two important gathering sites of these species and will be continuously monitored.”

The National Park continued: “It is important to know the main areas of congregation, population abundance, migration patterns and connectivity of these species at local and regional level; this information will allow us to develop conservation and management strategies for manta rays because some species are categorized as endangered on the Red List of the International Union for Conservation of Nature (IUCN).

“The research team sampled three species of rays to make comparisons with other populations in the region. In addition, the technique of photo-identification of individuals was applied, which consists of capturing an image of the belly of the manta, which have a unique pattern of coloring.

“This image is uploaded to a platform where it can be compared with others photographs taken in other parts of the world and therefore determine their distribution range.

“The expedition has the financial support of the Galapagos Science Center, Galapagos Conservation Trust, Manta Trust, National Geographic, and the owners of the SeaHawk and Ulysses ships.”