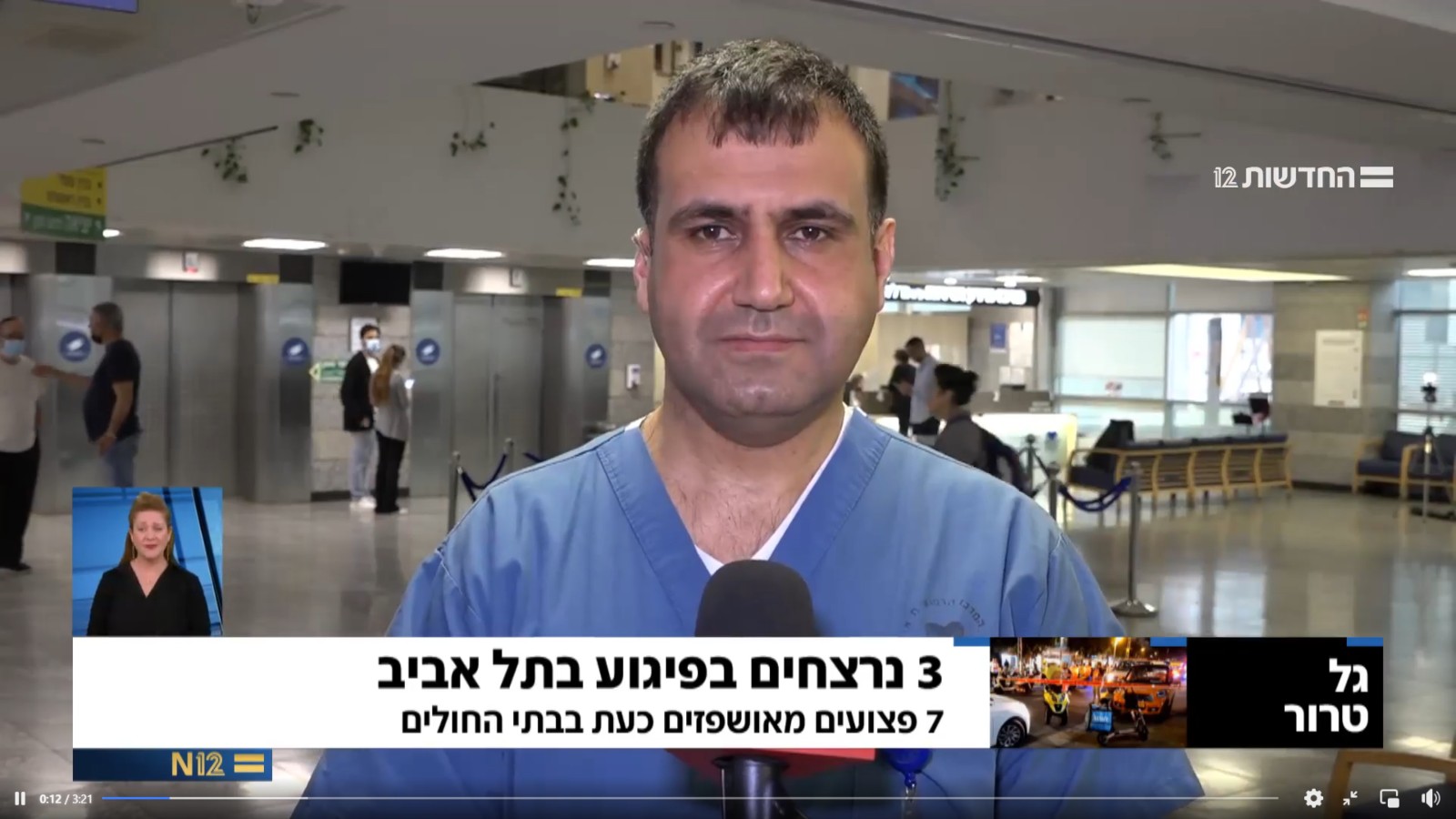 Dr. Nidal Muhanna speaking to a news anchor at Channel 12 in Israel about the deadly attacks. (Channel 12)

The Arab chief of head and neck surgery and cancer research at Tel Aviv Sourasky Medical Center has become an unexpected role model amid deadly terrorist attacks in Israel.

One attack was carried out by residents of the city where he lives.

At 9:30 p.m. on April 7, Dr. Nidal Muhanna was driving his family home to Umm al-Fahm – an Arab Israeli city in the Haifa District — when he received a phone call from Prof. Ronni Gamzu, CEO of the medical center.

Gamzu told Muhanna that 10 victims of a terror attack on Tel Aviv’s Dizengoff Street had been rushed to the hospital. One of them urgently needed the expertise of an ear-nose-throat specialist. He asked Muhanna to send a colleague as soon as possible. Instead of finding another physician, Muhanna immediately dropped off his family and “flew to Tel Aviv.

“When I arrived, [the patient] was already in an operating room in immediate danger of death. Together, with a team of professional surgeons and anesthetists, I was able to stop the bleeding and stabilize her until she was out of danger,” Muhanna said.

Minutes later, he attended to the serious facial wounds of another victim of the shooting incident. “In a complex operation, we stopped the bleeding, and he is also now recovering,” he said.

When asked to explain why he took on the difficult task himself, Muhanna explained that on March 27, two men from Umm al-Fahm carried out a deadly attack in Hadera that left two 19-year-old Border Police officers dead and eight other people injured.

“About two weeks ago, terrorists from the city where I live carried out a horrific attack. It is important for me on this particular day to set a different example,” he said.

“Ninety-nine percent of Umm al-Fahm residents and from the Arab sector support coexistence and are against violence and killing,” the physician said. “This is not our way, and it is contrary to Islam.”

In a message the medical center posted on Facebook, Muhanna said he was hoping “for quiet and safe days for all of us, the whole of Israeli society, Jews and Arabs alike.”

Trained at the Hebrew University of Jerusalem and later at Princess Margaret Cancer Centre in Toronto, Muhanna said that saving lives is a natural, obvious mission for him.

“This the ABCs of humanity,” he said. “Because that’s how I was raised at home – in Umm al-Fahm.”