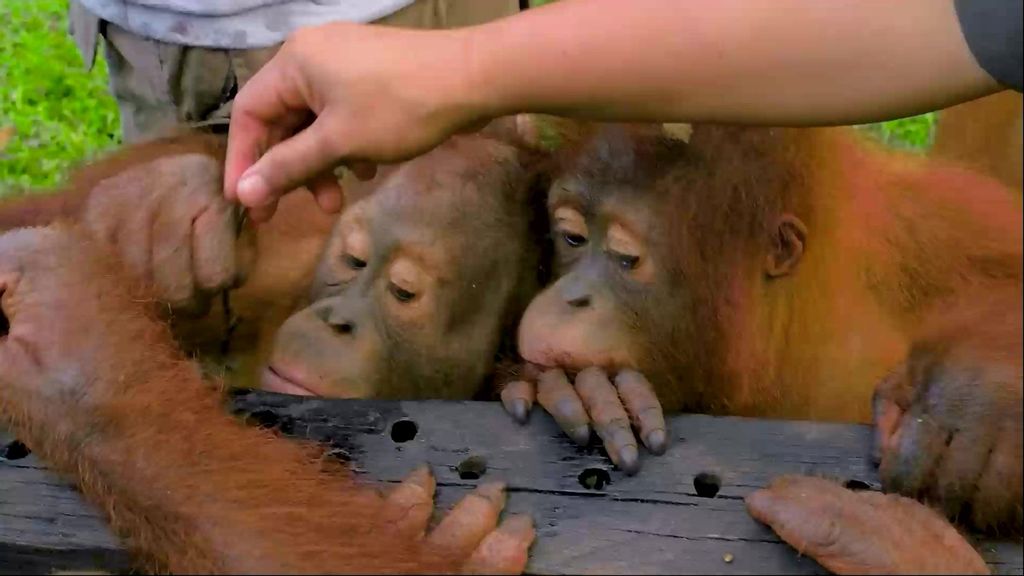 The orangutans get lessons in awareness of dangerous snakes, how to climb trees, build nests and forage for food. (SWNS)

Baby orangutans are going to school.

A nonprofit organization in Indonesia is teaching baby orangutans the survival skills needed in the wild. Lessons include an awareness of dangerous snakes, how to climb trees, build nests and forage for food.

Thousands of orangutans are displaced from their forest homes or killed every year, due to mass deforestation, rampant forest fires, poaching for consumption and the illegal pet trade.

The NGO Borneo Orangutan Survival (BOS) Foundation steps in to rescue any apes that survive their trauma or are reported as captive.

“They are immediately assessed and treated, before being quarantined and then placed into the appropriate stage of the rehabilitation process,” said Nicola Walpen, the foundation’s campaign officer. “The youngest orangutans join the nursery group, while juveniles are placed in forest school and are taught the skills they will need to survive in the wild. They must learn everything about forest life — from how to access natural foods to how to build secure nests.”

Footage filmed at the Nyaru Menteng Orangutan Rescue and Rehabilitation Center in Central Kalimantan, Borneo, shows the baby orangutans during training. They learn how to eat invertebrates from a tree on the forest floor and peel back the exterior of plants to retrieve the edible inner parts.

Their rehabilitation also ensures they steer clear of predators.

Once the apes become proficient in necessary survival skills, they move to a socialization complex in large enclosures and learn how to interact with each another.

“The final test is when they are moved to a forested, pre-release island where the orangutans have to prove themselves capable foragers, adept climbers, innovative nest-builders and appropriately wary of humans,” Walpen said.

Proficient candidates are then sent back to the wild at one of three foundation-managed release sites.

A post-release monitoring team follows them regularly from a distance, to collect behavioral data regarding their adjustment to life in the wild and to intervene should anything go wrong.

The Borneo Orangutan Survival Foundation was founded in 1991 to save orangutans from the illegal wildlife trade and return them to the wild.

In April 2017, the organization gained international attention after its rescue of an albino orangutan named Alba. She was discovered starving in a cage in Central Kalimantan, where she had been kept as a pet by villagers. Alba spent almost two years in Nyaru Menteng before she was released back into her natural habitat.

Bold and immediate action is needed to keep orangutans in the wild and protect the forests, Walpen said.

“Orangutan conservation is a global issue. If we lose orangutans, we risk losing forests and all life within them. We can protect rainforests from destruction, support local communities and make a real difference.

“It’s about your future, and the future of generations to come.”