The numbers of vaquita porpoises in the wild have been reduced to a handful.
By Martin M Barillas April 13, 2022
Facebook
Twitter
Linkedin
Email 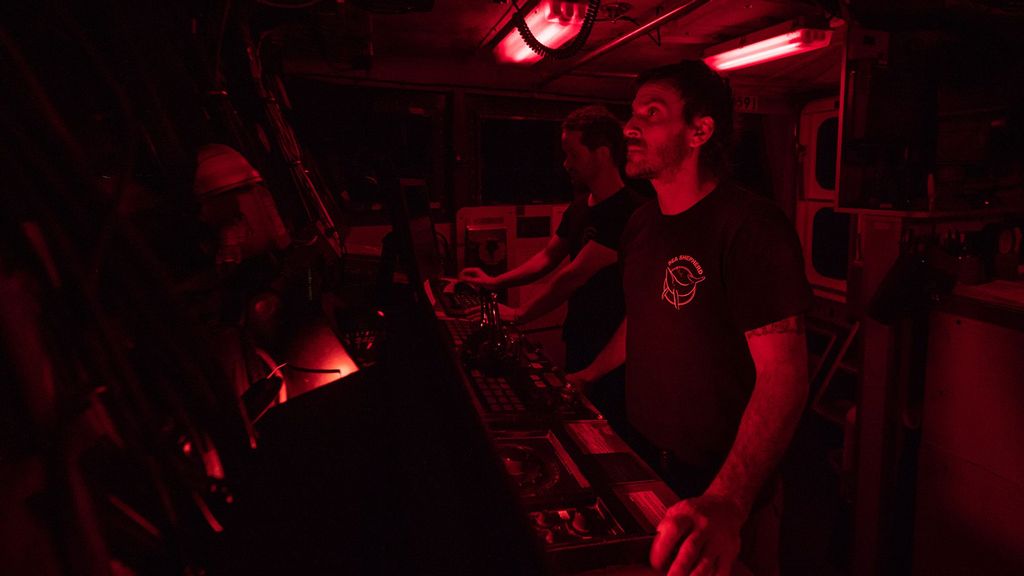 Captain and quartermaster patrolling at night from the bridge during Operation Milagro. (Sea Shepherd/Zenger)

The world’s tiniest and most endangered marine mammal could be spared thanks to an alliance between wildlife experts and the Mexican navy.

The numbers of vaquita porpoises in the wild have been reduced to a handful because of ruthless criminal gangs plundering the seas off Mexico’s Pacific coast.

The gangs use gill nets to catch a species of drum named totoaba – dubbed the ‘cocaine of the sea’ because its swim bladder, which is believed to have miraculous healing powers in traditional Chinese medicine, is worth more than gold on the medical black market.

But vaquitas – which swim in the waters of the Gulf of California – have been all but wiped out after being caught in the illegal nets.

Some experts say their total number in the wild could be as low as eight.

But now, a new agreement between the Mexican Navy and the Sea Shepherd Conservation Society (SSCS) – a conservationist group dedicated to preserving the ocean environment – has given new hope for the survival of the species.

The two sides have exchanged visitors on their ships as they monitor the region for rogue fishing fleets.

The plight of the porpoise – which grows to between four and five feet long – has attracted attention from Hollywood celebrities and wealthy philanthropists.

When Mexico decided to allow fishing in the region, film star Leonardo DiCaprio tweeted: “The Vaquita porpoise is the most endangered marine mammal in the world. Yet, the Mexican government has lifted the ban on fishing in its habitat, effectively ensuring that the remaining 10 or so porpoises will die in gillnets.”

To address illegal fishing, the SSCS and the Mexican government are working on their Operation Milagro (Miracle).

The two exchanged visitors on their respective ships in what is known as the Zero Tolerance Area (ZTA), in the upper reaches of Mexico’s Gulf of California, also known as the Sea of Cortez, on 31st March.

During the onboard visits, SSCS staff demonstrated how they monitor and report illegal fishing.

And the Mexican Navy showed off its swift interceptor boats, naval helicopters and fixed-wing aircraft, and demonstrated tactics.

Mexican Admiral Luis Portillo-Villanueva, who assumed command of the Second Naval Region in January, expressed appreciation to the SSCS.

Pritam Singh of the SSCS said, on 5th April: “This new updated partnership and coordinated effort in the Vaquita Refuge since January 2022 is effective in keeping nets out.”

He added: “Together with the Mexican Navy, we are improving the chances of survival for the vaquita.”

The SSCS also held meetings at the US Embassy and with Mexican Secretary of the Navy Jose Rafael Ojeda Duran in Mexico City.

The vaquita is the smallest of all cetaceans and is endemic in just a small range of the upper Gulf of California.

The porpoise was not fully described by scientists from specimens until 1985.

Mostly gray in color, it is distinguished by a triangular dorsal fin, its rounded head and markings around its eyes, and a lack of a pronounced beak.

Entanglement in nets and other illegal fishing gear is the biggest threat to the porpoise.

In October and November 2021, researchers onboard the scientific vessel ‘Narval’ of Mexico’s Museo de la Ballena (Whale Museum) made eight sightings of vaquitas in five days in the ZTA.

The researchers estimated that this means there were seven to eight adults and as many as two calves.

Fishing has long been a means of subsistence for people on Mexico’s shores.

A species of drum known as totoaba – a critically-endangered fish much prized in China for its supposedly medicinal swim bladder – is highly sought by unscrupulous fishermen.

A 2019 federal search warrant filed in California estimated that the swim bladders are valued between USD 20,000 to USD 30,000 per kilo, thus rivaling gold and cocaine.

Vaquitas become entangled in the nets and gear used in illegal fishing of totoaba.

Since 2015, the SSCS has cooperated with Mexico and researchers to protect the vaquita by removing illegal fishing gear inside the Vaquita Refuge, where the government prohibits gill-net fishing.

Since January, the SSCS reports that in the 225 square kilometers of the ZTA, there has been a significant reduction of fishing vessels spotted there.

The SSCS also reports a substantial reduction in the number of nets that ensnare vaquitas.

The SSCS has a fleet of 10 sea-going ships and several smaller vessels, which it uses in cooperation with governments all over the world.

So far, according to the SSCS, its fleet has removed over 1,000 pieces of illegal fishing gear from the refuge since 2015.

In a written response, D. J. Schubert – a biologist for the Animal Welfare Institute (AWI) – commented on the new agreement between the SSCS and Mexico.

He noted that since concluding the new agreement, the SSCS “has seen the number of illegal fishing vessels in the ZTA decline from over 50 in a single day in January to single digits in the past week”.