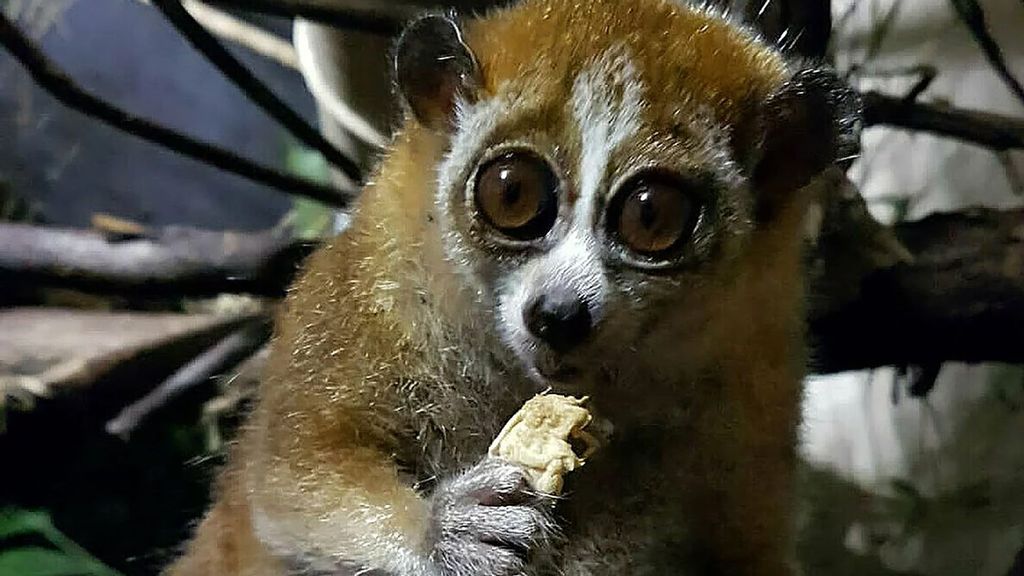 Pygmy slow loris Sue, aged six, who delivered two adorable offspring at the Leipzig Zoo located in the German city of Leipzig in the German state of Saxony on 3rd April. (Zoo Leipzig/Zenger)

While the improbably named “pigmy slow loris” is listed as endangered, its numbers grew by two, as their protective mother allowed zookeepers to film her newly born twins clinging to her body.

The two babies – the second set of twins for six-year-old mom named Sue – were born at the Leipzig Zoo, in Germany, on Sunday, April 3.

The primates are listed as ‘endangered’ on the International Union for Conservation of Nature’s Red List of Threatened Species.

Sue has been providing excellent care for the youngsters with their four-year-old father, Bero, according to zookeepers.

The experienced mom even allowed zookeepers to take a sneak peek at her offspring during the routine weighing procedure at the zoo.

“The young animals are lively, they cling tightly to the mother’s body and seem to be adequately cared for, said senior curator Ariel Jacken, who was pleased with the recent breeding success of the pygmy slow lorises.

The pygmy slow loris (Xanthonycticebus pygmaeus) is a species of slow loris that can be found east of the Mekong River, in Vietnam, in Laos, in eastern Cambodia and in China. It is part of the primate order.

These animals, which predominantly inhabit tropical dry, semi-evergreen and evergreen forests, are active during the night and crawl through branches using slow movements in search of prey.

Pygmy slow loris populations significantly reduced after their habitat was greatly damaged due to the extensive burning, clearing and defoliating of forests during the Vietnam War (1955 to 1975).

The IUCN classified the pygmy slow loris as ‘endangered’ on its Red List of Threatened Species in 2020.

A spokesperson for the Leipzig Zoo reported: “The IUCN regularly reviews the endangerment status of over 90,000 animal species on the Red List. The upgrading of this primate is primarily due to the massive decline in the population by around 50 percent in recent years.”

The spokesperson continued: “In addition, experts believe that the numbers will continue to fall, primarily due to their ruthless hunting for the pet trade, food and medicinal purposes. Moreover, the pressure on these animals’ habitat is increasing as a result of human settlements and agriculture.”