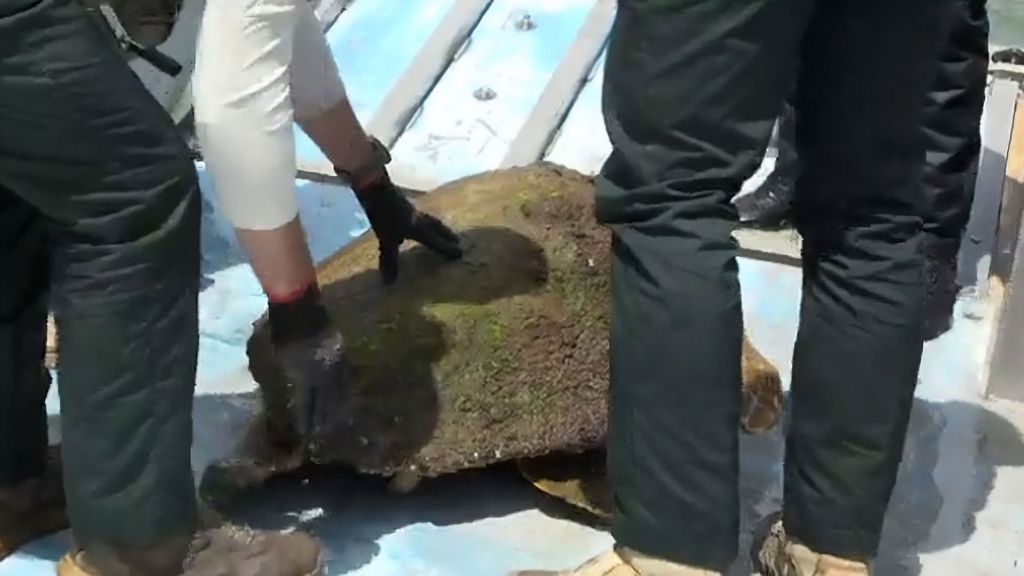 The rescue of the sea turtle in Lee County, Florida, USA. (@sheriffleefl/Zenger)

A rare loggerhead turtle has been saved by wildlife experts after they found it had swallowed a fisherman’s abandoned hook and line.

The vulnerable sea turtle – rescued from the Florida coast – was thin and suffering after the hook had become embedded inside its body.

It was then taken to Florida Wildlife Commission (FWC) officials, who turned it over to the Clinic for the Rehabilitation of Wildlife (CROW) for assessment and rehabilitation.

Footage from the rescue shows that the turtle was struggling to swim, and medics discovered it was thin.

In response to a query, Eve Haverfield of Turtle Time, a nonprofit conservationist group, said: “I just called to determine its status: it is in a tank, feeding – further tests need to be done.”

According to CROW spokesperson Hallie Mesics: “This adult female loggerhead sea turtle (Caretta caretta) is currently in care at the clinic outdoors in our sea turtle care facility in one of our sea turtle recovery tanks.

But surgeons have not yet established whether the hook had perforated the gastrointestinal tract.

Mesics could not predict how long the stricken turtle will be in CROW’s care, saying: “Hospital staff suspect the turtle was floating due to gas trapped in the intestinal tract but cannot rule out the possibility of hook perforation.”

Rehabilitation staff hope the turtle may pass the hook without surgery.

Mesics confirmed that although the turtle was struggling upon admittance, she is otherwise well.

They explained: “She has been active and mentally appropriate.

“Our hospital staff and rehabilitation staff are closely monitoring the turtle under supportive care. She has a great appetite!”

In a statement, Lee County Sheriff Carmine Marceno said: “Our Marine Unit is not only responsible for assuring the safety of our waterways, but also for protecting mammals and wildlife.

“The teamwork displayed by our Marine Unit was second-to-none.

“We are always here to assist our law enforcement partners at Florida Fish and Wildlife.

“We hope the sea turtle has a quick recovery and can return to our beautiful waters.”

Earlier this month, the Sheriff’s marine unit and FWC rescued a manatee that had been struck by a boat on the nearby Caloosahatchee River.

Sheriff’s spokesperson Anita Iriate stated: “We are happy to report the mission was successful! The manatee is currently being rehabilitated.”

CROWS has experience with other injured turtles.

“We recently released three sea turtles, one who was hooked by a fisherman and two others who were admitted with buoyancy issues.”

She added: “Hook and line injuries are common in marine mammals and shorebirds.

“Through a collaborative effort with partnering organizations, a campaign called ‘Mind Your Line’ emerged to educate the public about how to prevent the negative impacts of improperly discarded fishing gear on wildlife and the environment (mindyourline.org).”

Mesics advised that when a bird or sea turtle is accidentally hooked, the fishing line should not be cut immediately.

The animals should be reeled in and secured on land before the line is severed and the animal brought to a wildlife centre for proper hook removal.

Mesics warned: “Cutting the line can lead to serious injuries or even death for marine and wild animals!” She added that any fishing line in the environment should be discarded appropriately.

Conservationists note that April is the beginning of turtle nesting season on Florida’s beaches and ask that turtles and eggs be left unmolested.

Entanglement in fishing nets and gear is blamed for many sea turtle deaths.

Female turtles come ashore and dig nests, where they deposit dozens of eggs, which are prey for birds and land mammals. The females then abandon their nests.

From June to October, hatching baby turtles can be seen emerging from the nests and heading to sea, when they are again attacked by birds.

According to the US National Oceanic and Atmospheric Administration, their survival rate ranges from one in 1,000 to one in 10,000.

Loggerhead turtles are found in the Atlantic, Pacific and Indian oceans, as well as the Mediterranean.