Mission ‘Impossible’: A Sculpture That Can’t Exist On Earth Has Gone To Space

Artwork that becomes 3D in the absence of gravity is now installed on the International Space Station.
By Abigail Klein Leichman April 13, 2022
Facebook
Twitter
Linkedin
Email 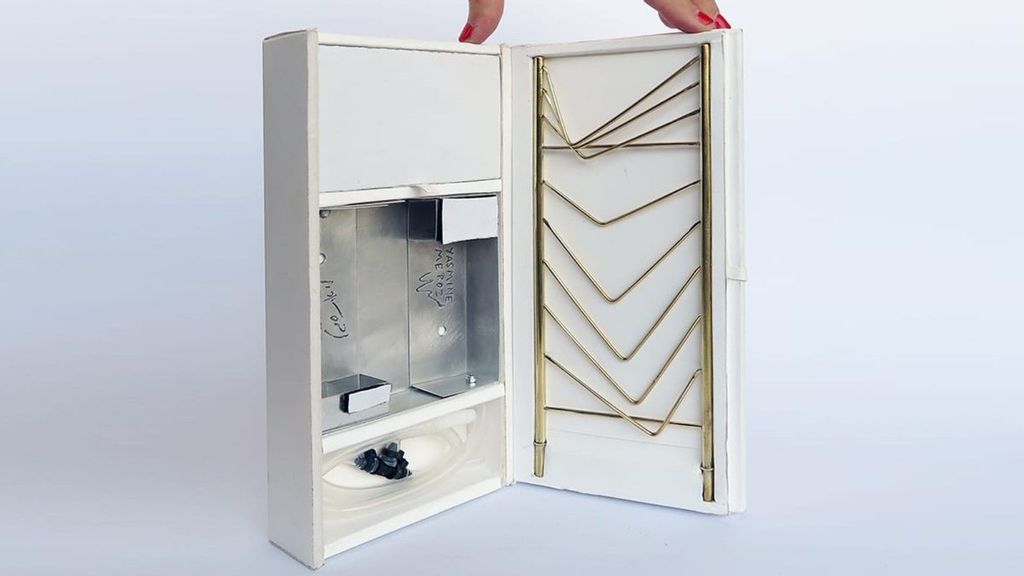 The “Impossible Object” sculpture ready to go into space. (Courtesy of Yasmine Meroz and Liat Segal)

A flowing water sculpture that can take on a 3D form only in the absence of gravity was taken to the International Space Station (ISS) aboard the Rakia mission of Israeli astronaut Eytan Stibbe on April 8.

Designed by physicist Yasmine Meroz of Tel Aviv University and contemporary artist Liat Segal, the sculpture — dubbed the “Impossible Object” — is made of interconnected brass pipes and rods, through which water flows.

In no-gravity conditions such as those found on the space station, the water adheres to the rods, forming a liquid layer shaped by water tension, which envelops the brass structure and yields a three-dimensional shape that changes over time like a wavy staircase.

Meroz’s lab at TAU’s School of Plant Sciences and Food Security studies the physics of plant systems. Segal studied computer science and biology and worked in high-tech for several years before shifting to a career in arts.

The two women, who met as graduate students Tel Aviv University, did a previous collaborative artwork, “Tropism,” which was exhibited at the Genia Schreiber University Art Gallery.

“There is much in common between art and scientific research,” Meroz said.

“Both are the result of a thought process in which creativity plays a central role and are motivated by the desire to ask interesting questions. ‘Impossible Object’ is a research-based artwork, where the medium is basically the physics underpinning water behavior in the absence of gravity. I learned a lot in the process.”

Segal said the co-creation “is timely, weighing the role of culture and art in an era when humanity is experiencing accelerated scientific and technological developments.

“Following incredible technological and scientific achievements in space, and as space tourism becomes tangible, it is important to reflect on the place of culture and arts in our lives, on earth and beyond.”

This is not the first time a work of art has made an appearance on the space station. In 2015, an Italian astronaut carried tiled mosaic pieces on board that featured a character from the 1970s arcade game “Space Invader” by Invader, an anonymous street artist. And earlier this year,  Artificial Mind and artist Cecilie Waagner Falkenstrøm created Celestium, a hybrid AI-blockchain algorithm that uses data from cosmic radiation it experienced onboard the International Space Station and turned it into images of space.

The post A sculpture that cannot exist on Earth is going to space appeared first on ISRAEL21c.