In The Footsteps Of History: 15 Hikes Highlight Key Biblical Locations 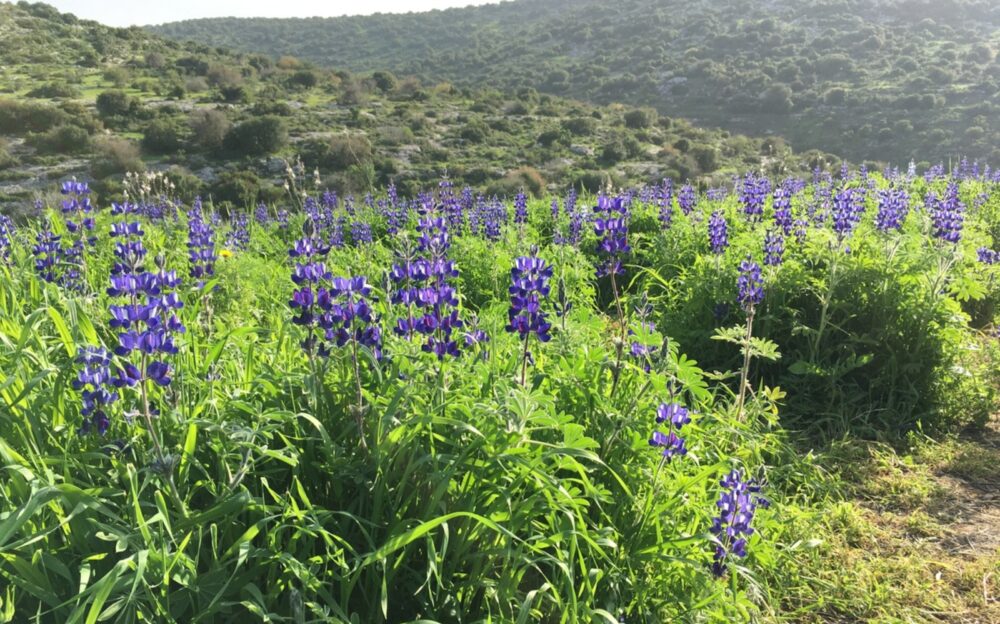 Givat HaTermosim, also known as Lupine Hill, is famous for its flowers. It's located in the Elah Valley, where David is said to have killed Goliath. (Brian Blum)

In Israel, hiking intersects with history.  And nature reveals places of biblical wonder.

Whether it’s a visit to King Solomon’s palace, where David slew Goliath or following in the footsteps of Jesus, it’s all in one country: Israel.

1. David vs. Goliath in the Elah Valley

The future King David defeated the Philistine giant Goliath in the Elah Valley, according to the book of Samuel. It happened between the ruins of the ancient villages of Azekah and Shaaraim, in the outskirts of Beit Shemesh.

The climb to Azekah, accessible via Britannia Park, is lined by plaques with biblical verses. There are two trails, six miles or three miles.

Also in the Elah Valley is Givat HaTermosim, also known as Lupine Hill. For a few weeks in spring, purple lupines blossom in the tens of thousands.

While you’re in the Beit Shemesh area, visit Tel Lachish. Lachish was one of the Canaanite cities that fought against Joshua in the Battle of the Amorite Kings.

Set Waze to Moshav Lachish and climb to the top of the mound, which archeologists discovered and began excavating in 1929. The earliest remains belong to the Neolithic period (8300-4500 B.C.E). Lachish flourished under the late Bronze Age rule of the Egyptians, but by 1140 B.C.E., the city was razed and remained abandoned for two centuries.

The quick hike up and down the hill is pretty, but if you’re feeling energetic, expand your radius to include nearby Beit Guvrin National Park.

In that battle with the five Amorite kings, the book of Joshua explains the Israelite leader’s army chased the Amorites from Gibeon, in the Judean hills, down to the Ayalon Valley.

But there wasn’t enough time to finish the job, so Joshua cried out to God to extend the daylight hours: “Sun, stand still over Gibeon, and you, moon, over the Valley of Ayalon.”

To follow in Joshua’s footsteps, start this three-mile hike near Modi’in and follow the blue trail. (There are optional detours on the green and black trails to check out some cool ruins.) Take a break at the Mitzpeh Kramim viewpoint for a picnic and imagine the biblical battles.

This hike starts near Hebrew University’s Mount Scopus campus and winds through Emek Tzurim until it reaches the Church of Mary Magdalene and the Gethsemane biblical pilgrimage site. The trek is nestled between Jerusalem’s Old City to the west and the Mount of Olives to the east, with the Temple Mount always in full view.

Emek Tzurim is part of Park Jerusalem, whose 26 miles circle the city. Since this is a one-way hike, not a loop, take public transportation and get off at the Givat Hamivtar light rail line.

Deborah the prophet famously fought alongside General Barak against the Canaanite king Jabin and his head of army, Sisera, at Mount Tabor.

Sisera commanded a force of 900 iron chariots, but Deborah recruited 10,000 warriors, according to the book of Judges — and prevailed.

There are two ways to hike Mount Tabor, which is west of Nazareth. Either straight up from the base (a nearly four-mile trek), or take your car to the top, where there is a shorter loop starting from the Church of Transfiguration. (Built in 1924 on the ruins of an earlier fourth-century Byzantine church, it is considered the traditional location where Jesus was transfigured with bright rays of light.)

A mountain ridge that marks the border between the Jezreel Valley and the hills of Samaria, the Gilboa rises some 0.3 miles above the plains, providing fantastic views of the Sea of Galilee, Haifa and even Mount Hermon.

Mount Gilboa was the setting of a fierce battle between the Philistines and the Israelites, led by King Saul. It was during this fight that Saul falls on his sword to avoid being captured by the enemy.

There are two short hikes: a short circular hike (green trail) that passes along the edge of the cliff (watch out for paragliders), and a one-mile circuit along the ridge. (If you drive, walk back to your car along the main road.)

The best time to hike is in the spring, when the Gilboa irises are in full bloom.

High above the modern city of Haifa, on Mount Carmel, the prophet Elijah challenged King Ahab and the prophets of the Canaanite deity Baal, as told in the book of Kings.

Set Waze for the parking lot near Muhraka. Follow the red trail to the Karach ruins, a late Roman/Byzantine Jewish settlement. Continue to the 17th-century Carmelite Monastery of the Prophet Elijah. On a clear day, you can see all the way to Mount Hermon. This is a nearly five-mile hike without a lot of ups and downs.

One of the most famous stories in Genesis is about Lot and his flight from Sodom, as God prepares to punish the city for its wickedness. When Lot’s wife looks back at her home, she is transformed into a pillar of salt.

To hike the area, look for the signs and start on the blue trail. There are 250 steps and three ladders, but it’s worth the effort. From the top, there are panoramic views of the Dead Sea and the Moav mountains in Jordan. The biblical highlight is the “Lot’s wife” rock pillar.

Total hiking distance is almost five miles. There are also 150 salt caves, although most of are closed, due to the danger of falling rocks.

In Israel’s southernmost city of Eilat, according to the book of Kings, “King Solomon also built ships at Etzion Geber,” an ancient seaport located between the modern towns of Eilat in Israel and Aqaba in Jordan. The actual site of Etzion Geber is in Jordan.

Excavations indicate a fortified and prosperous settlement dating to the period of the Judean kingdom. Etzion Geber is mentioned several times in the Bible – in Numbers, “and they departed from Ebronah and encamped at Etzion Geber,” and Deuteronomy, “through the way of the plain from Elath and from Etzion Geber.”

Climb from the Eilat Field School to the summit of Mount Tzfachot on the green trail for a fantastic view of the entire area. Then return via the blue trail to the main road. Plan for up to four hours of hiking.

After Jesus was resurrected, he met two disciples on the road traveling from Jerusalem to the village of Emmaus Nicopolis, according to the Gospel of Luke. That’s about 18 miles to the west of Ayalon Canada Park. The park is rich in natural woodland scenery, planted forests and especially fruit trees.

A newly inaugurated hiking path, the Emmaus Trail, allows modern trekkers to follow in the footsteps of that story.

The trail starts near the village of Abu Ghosh, cutting the total distance to a more manageable 11 miles. The Saxum Visitor Center, a state-of-the-art multimedia museum, is dedicated to the life of Jesus. Then head down into Nahal Yitla on the black trail, switching to the red trail near Neveh Ilan.

Bethsaida is where the Gospels say the miracle of the healing of the blind man occurred, as well as the birthplace of the Apostles Andrew, Peter and Phillip.

Today, the ruins of Bethsaida are located within Jordan River Park, a recreation area in the Golan Heights with hiking trails, campsite and picnic areas.

The walk to the ruins is only 0.31 miles – follow the black trail. Hikers can add short hikes of less than a mile. The red trail markers take you past two reconstructed flour mills. Bethsaida was originally “Beit Tzeida” or the “House of Fishing.”

The Franciscan Church of the Primacy of St. Peter near Capernaum, Israel, on the northwest shore of the Kinneret (Sea of Galillee) is a widely visited religious pilgrimage site. Both towns are on the shores of the Sea of Galilee and close to each other.

Tabgha is on the northwestern shore of the sea. It is considered the place of the “miracle of the multiplication of the loaves and fishes,” described in the Gospel of Mark, and the fourth resurrection appearance of Jesus (John 21).

Capernaum is the site of an ancient fishing village established around 1000 BCE. Today, there are two religious compounds belonging to the Franciscans and the Greek Orthodox, respectively; a fourth-century synagogue; and the ruins of what is believed to be the house of Peter the Apostle.

Walk between the two sites along the purple trail, then return on a paved promenade that parallels the main road.

Near the city of Nazareth has many sites of Christian interest, as well as culinary delights, such as freekeh (a cereal food) at the Elbabour spice mill, kadaif from Abu Ashraf and knafeh at Mahroum’s pastry shop. Also, consider a stroll along Nahal Tzipori (Sepphoris Stream) to the Ein Yivka swimming hole.

Many hike the 40 miles Jesus Trail stretching from Nazareth to Capernaum along the Sea of Galilee. The trail passes many highlights of Jesus’ life as it winds its way from downtown Nazareth to Tzipori National Park. Sites includes the churches of Cana, where tradition says Jesus turned water into wine, the Horns of Hattin, where Saladin defeated the Crusader army in 1187, Arbel National Park and Nature Reserve, the “Jesus boat” at the Yigal Allon Center and the Mount of Beatitudes.

The whole trek takes four days — and there is accommodation along the way. Driving can turn the trail into a series of day trips.

Neot Kedumim, located midway between Jerusalem and Tel Aviv, comprises 625 acres of a “biblical landscape reserve” recreating the physical setting of the Bible “in all its depth and detail, allow[ing] visitors to see life as it was lived by our ancestors 3,000 years ago.”

This includes Abraham’s Tent, made of handwoven goat hair, an educational exhibition of different “sukkot,” including one on a boat, a camel and a horse-drawn cart. There is also a large amphitheater seating 1,200 people that’s suitable for group ceremonies.

Signs are posted throughout with relevant quotes in Hebrew and English from biblical texts. Visitors can hike on their own or join a guided tour, which includes operating an oil press and working with a hand mill.