Football Mad Youngster Gets Bionic Limb With Help From Team 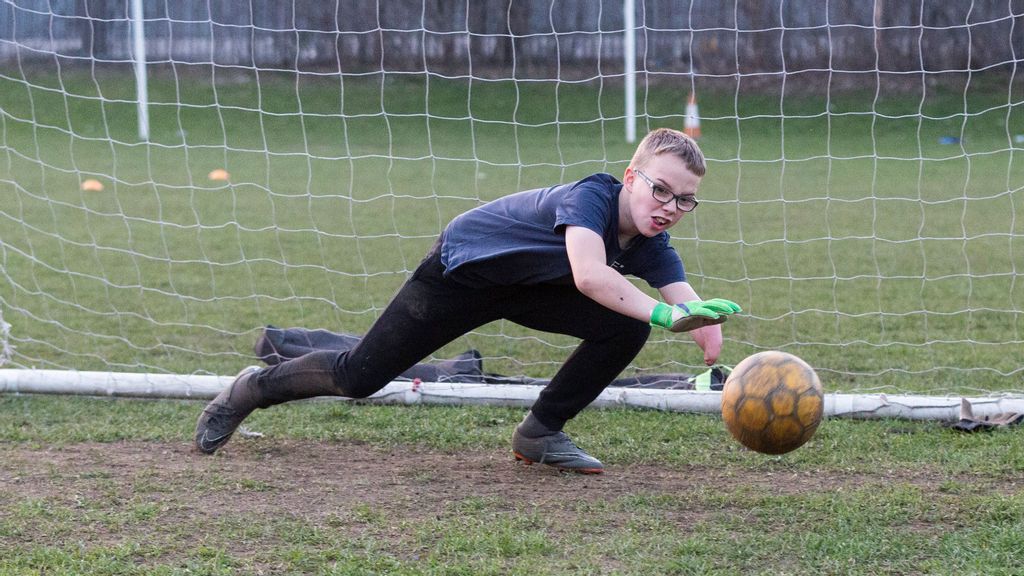 A football-mad youngster born with one arm is celebrating after his team helped him hit a fundraising target for a new bionic limb. (Lee Mclean/Zenger)

A football-mad youngster born with one arm is celebrating after his team helped him hit a fundraising target for a new bionic limb.

Wayde Drew, 12, was born without his left forearm after his mum, Kirsty Norman, 32, caught swine flu during her pregnancy.

But the determined youngster didn’t let that get in the way of his passion for football – and he has become the star between the sticks with his community team in Leeds.

Kirsty said the lad had previously struggled to get match time in his favored position as kids at his school thought he would be “rubbish”.

But Wayde showed that he can be as good as any other young footballer after he impressed coaches at Saxton FC in his favored position.

So when his teammates found out he was trying to raise thousands for a robotic “Hero Arm”, produced by Open Bionics, they helped him reach the target in just two months.

“Wayde has gotten very emotional now he knows his dream of having two arms has come true and we honestly can’t thank everyone who has helped to make this happen enough.”

Jonny Nixon, coach at Saxton FC, added that he was overwhelmed after hearing that Wayde would achieve his dream.

He said: “I was choked up myself. It was a really emotional day for everybody.

“We were really confident that we’d hit the target, because of how everyone was pulling together, but we didn’t think we’d hit it as quickly as we did.”

“I think it’s Wayde’s courage and his attitude that has connected with people. You’ve got to meet him to believe how he is with his disability, it doesn’t phase him.

In total, the team helped raise £7,500, with the Open Bionics Foundation, a charity that supports those in need of prosthetic limbs, paying the rest of the money.

The robotic arm lets wearers grip tiny objects, such as a needle and threat, with pinpoint precision.

Kirsty explained that Wayde had always been football mad but had struggled to find a team that would let him play in goal before coming to Saxton FC, in Leeds.

She said: “He’s always played football from being little, and he’s got an older brother who loves it.

“But at school when he plays football, the kids want to win, don’t they?

“So they automatically think because he’s only got one arm, he’s going to be a rubbish goalkeeper, so they don’t let him play in goal.”

Two years ago, Wayde turned up for his first practice, and they were more than happy to let him fulfill his dreams of playing in goal.

Kirsty said: “They’ve given him that chance, and he’s shown them that he is really good in goal, so that’s now his position at Saxon FC.”

Jonny said Wayde had excelled as a keeper as soon as he joined the club – and had become one of the most popular players.

He said: “He just turned up one day with his brother and said, ‘I play in goal’ – and we didn’t make a big deal about his arm, no questions asked – and he started making some saves.

“He was fantastic from day one, saving goals, and he’s always turned up since then and played as a keeper.

“He’s become a really popular kid, and he’s always got a smile on his face.

“He’ll turn up and help you set the nets up, and he’ll be the last to go as he’s helping you put them away.”

Kirsty said she had campaigned to get Wayde the new prosthetic after he had become more self-conscious about his arm since he started secondary school.

And she said the bionic ‘Hero Arm’ would give the lad a new lease of life.

She said: “Obviously, he just started high school, so he’s really embarrassed by it and he’s been trying to hide his arm.

“To us, Wayde is Wayde – he is normal. But he just wants to fit in and not have to worry about anything.

“When we showed him the arm, he said, ‘That will be better’ because rather than people saying ‘What’s wrong with your arm?’ They’ll say, ‘Oh wow, look at your arm!’.

“He just wants to be the same as everyone else, and now he’s at high school, he’s constantly getting questions and getting embarrassed by it.”

When asked what it would mean to him to get his new prosthetic limb, Wayde said: “It would change my life. It would mean the world to me if anyone could help.”