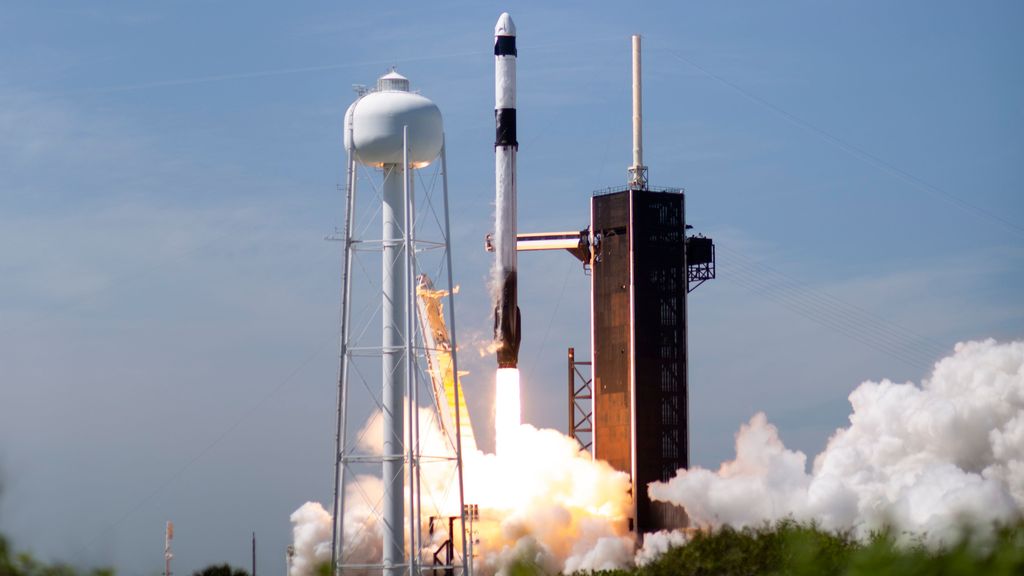 In this NASA handout, A SpaceX Falcon 9 rocket carrying the company's Crew Dragon spacecraft is launched on Axiom Mission 1 (Ax-1) to the International Space Station with Commander Michael López-Alegría of Spain and the United States, Pilot Larry Connor of the United States, and Mission Specialists Eytan Stibbe of Israel, and Mark Pathy of Canada aboard, Friday, April 8, 2022, at NASAs Kennedy Space Center in Florida. The Ax-1 mission is the first private astronaut mission to the International Space Station. López-Alegría, Connor, Pathy, Stibbe launched at 11:17 a.m. from Launch Complex 39A at the Kennedy Space Center to begin their 10-day mission. (Photo by Joel Kowsky/NASA via Getty Images)

In a pair of firsts, 64-year-old Eytan Stibbe became the first Israeli to enter the International Space Station on  the first-ever fully privately operated mission in outer space. The adventure is reportedly costing him $55 million.

Stibbe, a former fighter pilot and three others lifted off on a Spaces Falcon 9 rocket from NASA’s Kennedy Space Center in Florida at 11:17 a.m. EST on April 8.

About 21 hours later, the rocket carrying the four adventurers on Axiom Mission 1 docked at the International Space Station. Stibbe led the way on board as a former fighter pilot, followed by Canadian entrepreneur Mark Pathy, American businessman Larry Connor and retired Spanish-American NASA astronaut Mike López-Alegría, who is serving as the chaperon. López-Alegría is the only one of the four who didn’t put personal funds towards the mission, as he works for Axiom, the Houston-based company that coordinated the flight.

“What a historic launch! Thank you to the dedicated teams at NASA who have worked tirelessly to make this mission a reality,” NASA Administrator Bill Nelson said after the launch. “NASA’s partnership with industry through the commercial cargo and crew programs has led our nation to this new era in human spaceflight — one with limitless potential.”

Axiom was founded in 2016 by Michael Suffredini, the program manager for the International Space Station from 2005-2015, and Kam Ghaffarian, whose business career has long been tied to work with the U.S. space agency.

“The Ax-1 crew will live and work aboard the orbiting laboratory for eight days, conducting more than 25 research experiments across a breadth of biological and technological areas to inform future human spaceflight and improve life on Earth,” the statement added.

Stibbe was reportedly close to Israel’s first astronaut, Ilan Ramon, who was killed in the explosion of the Space Shuttle Columbia along with six others in February 2003.

Stibbe’s trip and the experiments he will carry out are part of what Israel calls the Rakia (Hebrew for “sky”) mission.

“Only 241 persons from 19 countries have spent time in [the International Space Station] in the past decades. It is intended to serve as a giant orbiting laboratory, enabling in-depth study of various phenomena under conditions of microgravity,” according to Rakia’s website.

Rakia is a project of the Ramon Foundation, an Israeli nongovernmental organization named in honor of the late astronaut and his family that is focused “on academic excellence, social leadership and groundbreaking courage,” and the Israel Space Agency. The mission’s stated purpose is “to inspire the younger generation while advancing and expanding the Israel space industry.”

Israeli President Isaac Herzog and his wife, Michal Herzog, spoke Sunday night via video link with Stibbe while he was on board the International Space Station.

“During these difficult times on the ground, this project, the exciting launch and experience that the whole house of Israel is watching is a point of light in the sky. These are moments that fill us with inspiration and excitement,” Herzog said.

Stibbe’s trip into space also marks the first time that Israeli youth will have access to what is happening on the International Space Station in Hebrew.