Pictures captured the scenes at the heronry at the National Trust run Belton House in the parish of Grantham in the United Kingdom
By Anamarija Brnjarchevska April 13, 2022
Facebook
Twitter
Linkedin
Email 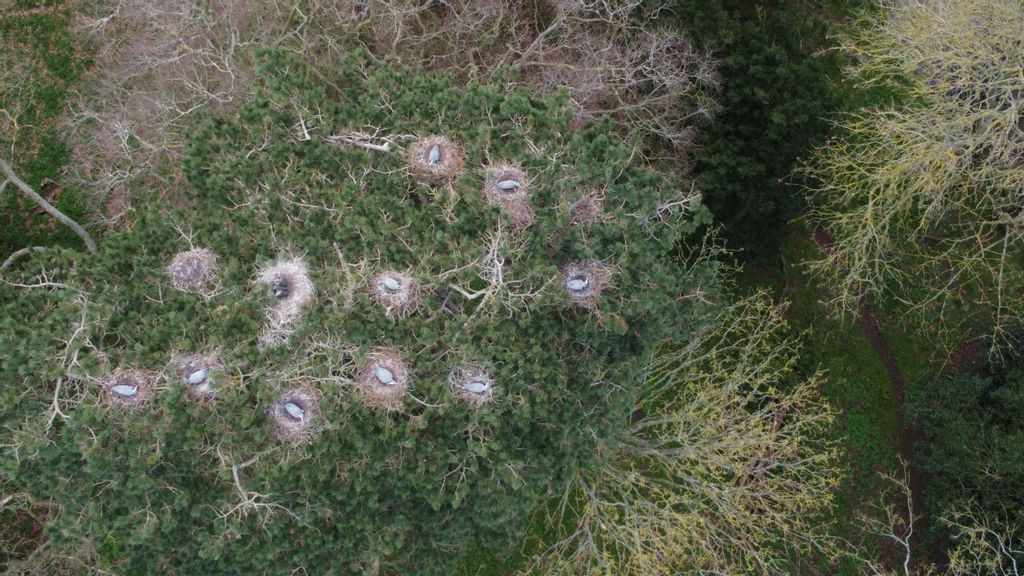 Breathtaking aerial images have revealed a cluster of 11 heron nests perched 100ft in the treetops - boosting hopes of a surge in the numbers breeding in the UK. (Simon Galloway/Zenger)

Breathtaking aerial images have revealed a cluster of 11 heron nests perched 100 feet in the treetops of a 17th-century stately home in England – boosting hopes of a surge in the numbers breeding in the UK.

The amazing pictures captured the scenes at the heronry at the National Trust run Belton House in the parish of Grantham, in the country of Lincolnshire, in the East Midlands, in the United Kingdom.

It is the first time a drone has been used for the British Trust for Ornithology’s (BTO) annual census.

A total of 11 active nests were discovered clustered together in the branches of a Scots pine (Pinus sylvestris) – nine more than experts expected to find.

Each nest contained three to four eggs produced from the 22 breeding birds.

Ecologist Andrew Chick, who conducted the survey, said: “This statuesque bird is often spotted alongside rivers across the country, where it waits patiently to capture its prey – mainly fish, amphibians, small mammals, insects, and eels.

“They usually lay their first egg in mid-March, so quite early, and only have one brood per year.

“These herons have probably chosen to nest in this particular Scots Pine tree because of its easy access to Belton’s ornamental ponds and rivers, which the National Trust has been actively managing and improving.

“It’s likely the herons have been present at Belton for decades, but thanks to the view from above this year we’ve been able to get a much more accurate record of how many are nesting in the heronry.”

Grey heron numbers have been increasing in the UK in recent years, but have declined in Lincolnshire.

Carl Hawke, Nature Conservation Adviser at the National Trust, said: “It’s great news to discover our heronry at Belton is much larger than previously thought.

“We have been working in partnership with Environment Agency and others to restore the stretch of the River Witham that runs through the Belton estate.

“This has included restoring the natural features that were missing, for example increasing the speed of the flow of the river in some places, putting in gravel to create shallow areas and creating riffles – spawning areas, to attract species like white clawed crayfish and wild brown trout.

“Later this year we plan to recreate wetland habitat alongside the river that will benefit the herons further.”

“We’re not really sure why numbers had previously dropped here.

“It could be down to a number of factors such as competition for nesting sites with other birds, or possibly the effects of intensive farming on waterways, it’s difficult to know for sure.

“But it’s clear that the conservation work we have done here at Belton is having a positive effect on the breeding population which is fantastic.”

Annual counts take place every spring as part of the British Trust for Ornithology’s (BTO) Heronries Census, which started in 1928.