Zenger News obtained the images from the Russian Ministry of Defense along with a statement, on Wednesday, 13th April.
By Joseph Golder April 13, 2022
Facebook
Twitter
Linkedin
Email 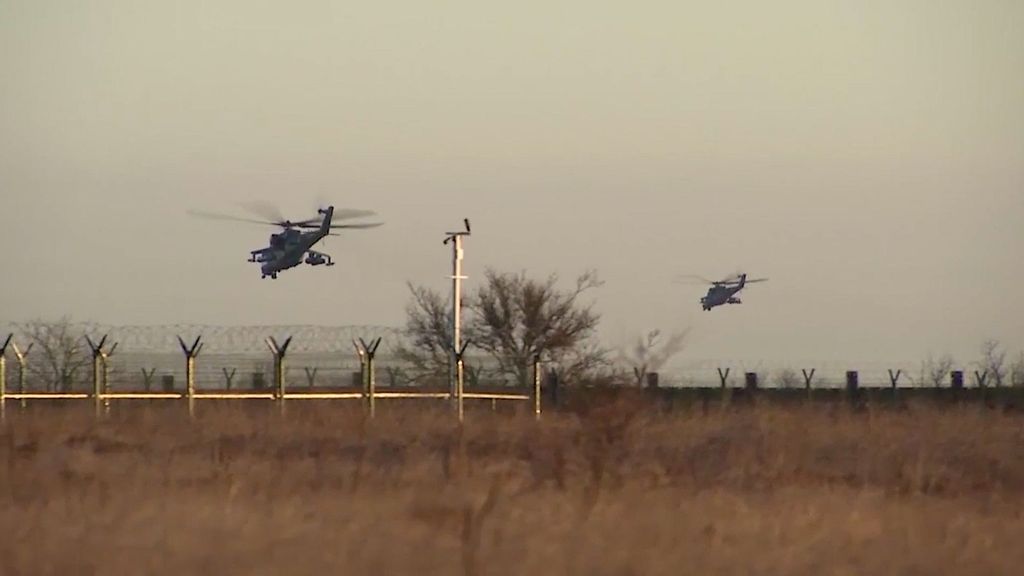 Army aviation crews attacked the positions of air defense systems and armored vehicles of the Armed Forces of Ukraine in April 2022.  (Ministry of Defense of Russia/Zenger).

These images reportedly show Russian attack helicopters taking out a Ukrainian missile launch site after being fired upon.

The images appear to show the helicopters – daubed with a white ‘Z’ – flying into action before the footage then cuts and appears to show a helicopter targeting system.

The pilots can be heard rapidly speaking to each other in Russian as a plume of smoke can be seen from what appears to be a missile fired from the ground.

The footage then cuts again and appears to show a targeting system, with a target then exploding. The footage ends with attack helicopters landing, presumably back at base.

Zenger News obtained the images from the Russian Ministry of Defense (MoD) along with a statement earlier this morning (Wednesday, 13th April).

The Russian MoD said (in Russian): “A group of Mi-24, Mi-28N and Ka-52 attack helicopters carried out tasks to support troops on the ground. At this time, a rocket of the anti-aircraft missile system (SAM) ‘Buk’ of the Armed Forces of Ukraine was fired at the leader.”

The Ka-52 ‘Alligator’ is the latest iteration of the Ka-50 attack helicopter, developed and built by Russia in the late 1980s and early 1990s, as a heavily-armed attack aircraft used for scouting missions and special operations.

The Mil Mi-24 is a larger helicopter gunship that can carry passengers and also doubles as an attack helicopter, while the Mil Mi-28 is a somewhat lighter aircraft used exclusively as an attack chopper and which can, just like the Ka-52, be used both in the daytime and at night.

The Russian MoD also said: “On command, the helicopter crews launched a missile attack on the discovered launch site, destroying the launcher and the crew of the air defense system.

“In addition, during the flight, army aviation crews destroyed armored vehicles belonging to the Armed Forces of Ukraine, disguised and hidden in a wooded area, with guided missiles.

The footage was also carried by the state-owned Russian media platform and television channel Zvezda, which headlined its article “Attack of the ‘reptiles'”, presumably in reference to the Ka-52’s unofficial name, the ‘Alligator’.

Moscow is claiming that 1,026 Ukrainian soldiers of Ukraine’s 36th Marine Brigade have surrendered in the besieged city of Mariupol. However, a top adviser to Ukrainian President Volodymyr Zelenskyy has said that the strategic port city, located in south-eastern Ukraine, is still holding out.

Chechen leader and Vladimir Putin ally Ramzan Kadyrov claimed on the evening of Tuesday, April 12, that more than 1,000 Ukrainian soldiers had surrendered in the besieged south-eastern Ukrainian city of Mariupol.

And the United Nations said, on Wednesday, April 6: “In Ukraine, humanitarians said on Wednesday that hundreds of people have managed to reach safety after fleeing Mariupol, where there’s also been condemnation for the killing of Lithuanian filmmaker Mantas Kvedaravicius, as he tried to escape from the besieged and battered city a few days ago.”