Ukrainian Air Assault Forces shared a video of paratroopers blowing up a Russian tank on the edge of a wooded area, on 12th April.
By Lee Bullen April 12, 2022
Facebook
Twitter
Linkedin
Email 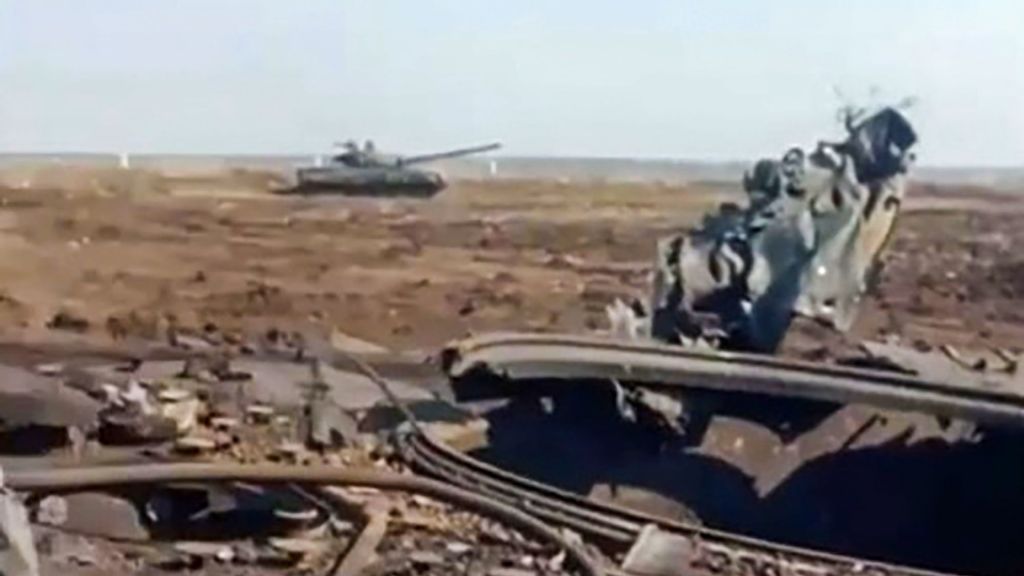 Zhytomyr paratroopers destroyed five enemy tanks, one of them - the commanders in April 2022. (@www.dshv.mil.gov.ua/Zenger)

This is the moment Ukrainian troops take a well-earned break in their foxholes after reportedly destroying five Russian tanks.

The footage shows two paratroopers with missile launchers sitting in a trench in front of a field covered in tank wrecks and debris.

The Ukrainian Air Assault Forces (DShV) said on April 11: “Zhytomyr paratroopers destroyed five enemy tanks, one of them a commander.

“Soldiers of the 13th Air Assault Battalion, named after the Hero of Ukraine Colonel Senyuk Taras, and 95th Air Assault Brigade of the Armed Forces of Ukraine, during two days of fierce fighting in one of the most important areas, destroyed five enemy tanks, one of them a commander.

“Ukrainian paratroopers continue to carry out combat missions to destroy the Russian occupiers, turning their equipment into scrap metal.

“Only through joint efforts will we protect Ukraine and its citizens and win! Glory to DShV! Glory to Ukraine!”

This morning (Tuesday, 12th April), the Ukrainian Air Assault Forces also shared a video of paratroopers blowing up a Russian tank on the edge of a wooded area.

“This is how artillery units of the 81st Airmobile Brigade of the DShV of the Armed Forces of Ukraine destroy the Russian occupiers together with their armored vehicles.

“The enemy will be destroyed, and the Ukrainian land will be completely cleansed of invaders! Glory to DShV! Glory to Ukraine!”

The video shows a Russian armored vehicle on the edge of the treeline as a missile hits, sending a huge plume of smoke into the sky.

Russian troops invaded Ukraine on 24th February in what the Kremlin is calling a “special military operation”. Today marks the 48th day of the invasion.

From February 24 to April 12, the total combat losses of Russian troops stand at 19,600 personnel, according to the General Staff of the Armed Forces of Ukraine.

The Ukrainian Armed Forces say Russian troops have been regrouping near Ukraine’s eastern border in preparation for an anticipated new assault in the east.

Russia is expected to double or even triple its troop numbers in the Donbas region, according to Western officials.