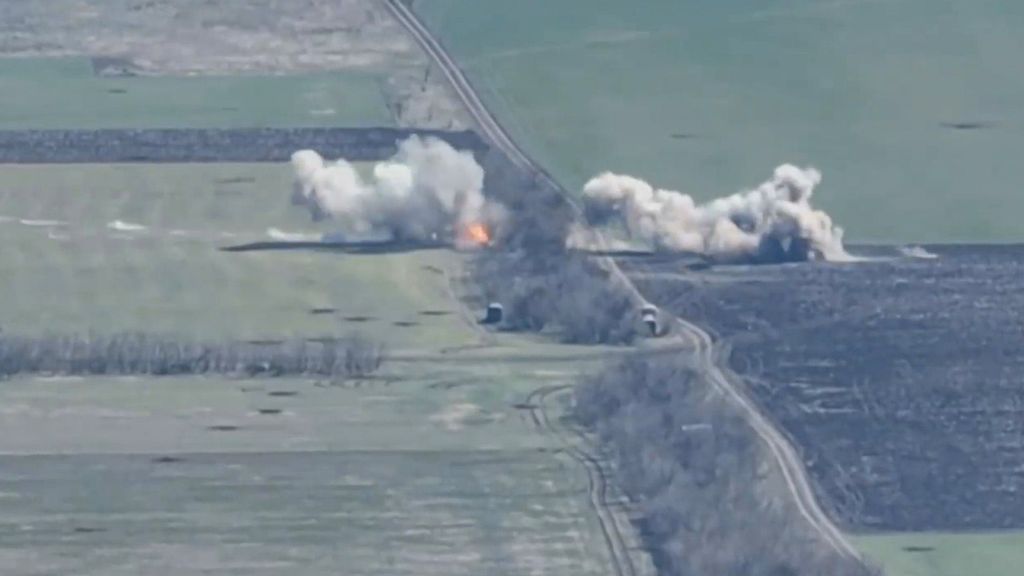 Fighters of the 59th Brigade based in Haisyn, Ukraine, effectively destroyed the mortar battery in April 2022. (@59ompbr.com.ua/Zenger)

Fleeing Russian forces have been mocked by Ukraine over video footage that shows them scrambling to abandon an under-fire position.

Ukrainian troops filmed the missile strike and could not help but laugh at their enemy’s rapid retreat on foot.

The footage apparently shows the Russian soldiers fleeing up a country road.

The 59th Motorized Infantry Brigade – a formation of the Ukrainian Ground Forces – said on the morning of April 11: “Good morning, Ukraine!

“The day should start with a workout, even if you don’t really want to.

“As the orcs do not like morning exercises, the guys from the 59th Motorized Infantry Brigade, named after Yakov Gandziuk, did their best to help them work up the necessary energy, organizing them for a morning run and push-ups.”

In the footage, at least two multi-purpose vehicles are seen parked next to a tree line in an open field before two missiles explode nearby.

As the smoke clears, around a dozen men are seen sprinting up the road as further strikes hit the area, sending large plumes of smoke high into the sky.

The footage was reportedly filmed in Haisyn Raion, in Vinnytsia Oblast, in south-western Ukraine.

In the latest reports, Ukrainian President Volodymyr Zelenskyy says Russia is amassing tens of thousands of troops for its next offensive in the east of the country as more civilians are set to leave besieged regions via humanitarian corridors.

Meanwhile, Austrian Chancellor Karl Nehammer is due to meet Russian President Vladimir Putin for talks in the Russian capital, Moscow, thereby becoming the European Union’s first premier to meet the Russian leader since the start of the war.

The World Bank has said that the Ukrainian economy will shrink by almost half this year due to the ongoing war.