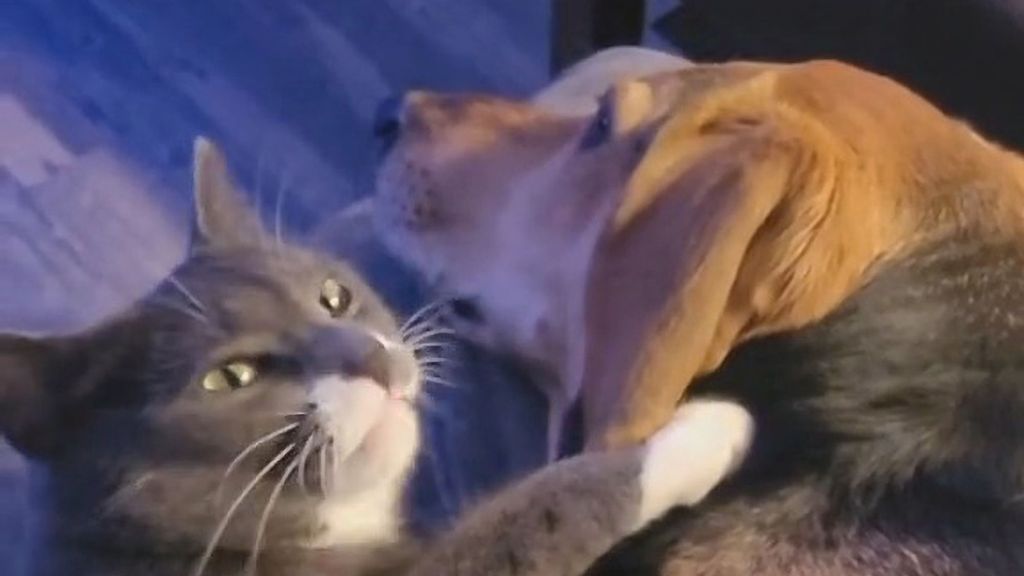 The cat Twig and the dog Meadow that live in Buffalo, New York, are best friends. (@heyitslee_bekind/Zenger)

This is the viral moment Meadow the dog enjoys a heartfelt cuddle on the sofa with her cat chum after picking out the feline as a new housemate.

Lee Babirad, 39 – a freelance photographer and graphic designer from the city of Buffalo, in the US state of New York – shared the video on TikTok, where it has gone viral, with nearly 6 million views.

The cute clip was shared with the message: “If we could all love each other like this cat (Twig) and dog (Meadow) do…”

Lee said Meadow helped her pick out their feline companion in 2020, the day after her service dog died.

In the footage, the adorable pair are seen cuddling up on the sofa as a caption reads: “I took Meadow to pick out a kitten the day after my service dog passed in 2020. I’m glad I did. These two have been best friends ever since.”

Lee, who calls herself a ‘Kindness Influencer’ on TikTok, said she took Meadow, a three-year-old German shepherd, to choose her new housemate in July 2020.

Twig, a one-year-old grey-tuxedo Russian Blue cat, has been inseparable from Meadow since they formed their friendship nearly two years ago.

“Meadow also loves visiting the dog park to run and play with other dogs. Twig is a fan of being held in my arms when I take Meadow for walks.”

When asked about her video reaching over 5 million TikTok users, Lee said: “I had hoped that people would see the video and ‘feel the love’, but I didn’t expect it to go viral.”

She added: “It’s encouraging to see a positive video do so well!”

Lee said: “Sharing with others what I get to experience while watching Meadow and Twig is a priceless gift. Love and kindness is my jam, but these two take it up a few notches.”

According to the American Pet Products Association (APPA), 69 million families own at least one dog in the US, making canines the most popular pet in the country. Cats came second, with around 45 million homes having a feline companion.