I’ll Be Bark: Terminator Dog On Trials With US National Guard

The 'dog' is called Q-UGV, and it was built by Ghost Robotics and Immersive Wisdom.
By Joseph Golder April 12, 2022
Facebook
Twitter
Linkedin
Email 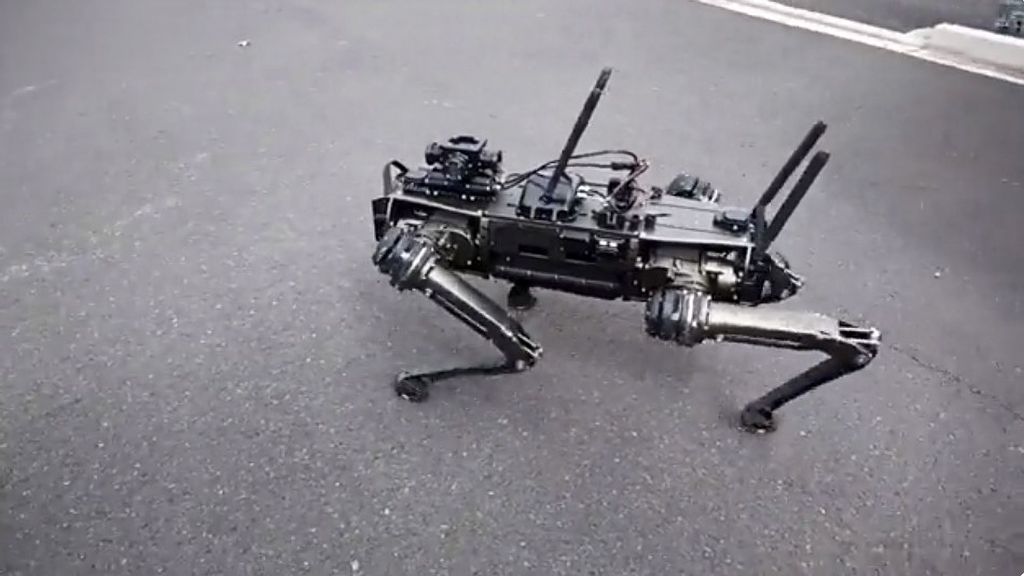 A chilling Terminator pooch is being put through its paces with the US National Guard to see if it is tough enough to patrol America’s bases.

Video footage from the trials shows a unit trying out a new robot dog to help guard its base.

Clips show the mechanical mutt moving around the base before a soldier tests its ability to keep its balance when it is attacked.

The robot is shaken around, but it still manages to recalibrate itself. That is until the soldier pushes it over with his foot, and it remains on its back before the footage cuts to it back on its feet again, with it unclear if it was able to right itself again on its own.

But unlike the mechanical monsters from the Terminator films, the robo-dog is not built with weapons.

The footage later shows the dog – complete with a camera on its back – patrolling the military base’s fences before the clip ends.

The 173rd Fighter Wing said: “One of the newest innovations in law enforcement wandered around the 173rd Fighter Wing, paying special attention to a group of curious onlookers as well as checking out the security forces compound during a demonstration by the 142nd Fighter Wing’s robot ‘dog’, March 8, 2022.

“The 142nd brought the ‘dog’ to the Southern Oregon unit to showcase what may become an integral part of base defense in the future.”

The US Department of Defense also said in a statement obtained by Zenger News: “One of the most advanced pieces of law enforcement technology nosed around Kingsley Field, checking out the sights and sounds, exploring every nook and cranny of the security forces compound and checking out a lot of curious onlookers March 8, 2022.

“The 142nd Fighter Wing Security Forces brought their robot ‘dog’ to the base to demonstrate a new capability the Air Force is using to enhance base defense for a crowd of people including local law enforcement.

“Many in the crowd thought the ‘dog’ shared mannerisms with its biological counterpart and at least one person thought it needed a tail to wag enthusiastically, would you agree?”

The ‘dog’ is called Q-UGV, which stands for ‘Quad-legged Unmanned Ground Vehicle’, and it was built by Ghost Robotics and Immersive Wisdom.

The mechanical pooch is part of a push to potentially make base security semi-autonomous.

The robot ‘dogs’ are reportedly being tested at US military bases to assist with security.

They are reportedly able to monitor perimeters and can be programmed to go on set patrol routes.

They are not unlike the ‘robot dog’ Spot, which was first developed by Boston Dynamics, whose stated mission is to “imagine and create exceptional robots that enrich people’s lives.”