Hit Or Missile: Russia Claims To Shoot Down Drone

The Russian MoD said the strike took place off the Crimean coast and was carried out by servicemen of the Black Sea Fleet.
By Lee Bullen April 12, 2022
Facebook
Twitter
Linkedin
Email 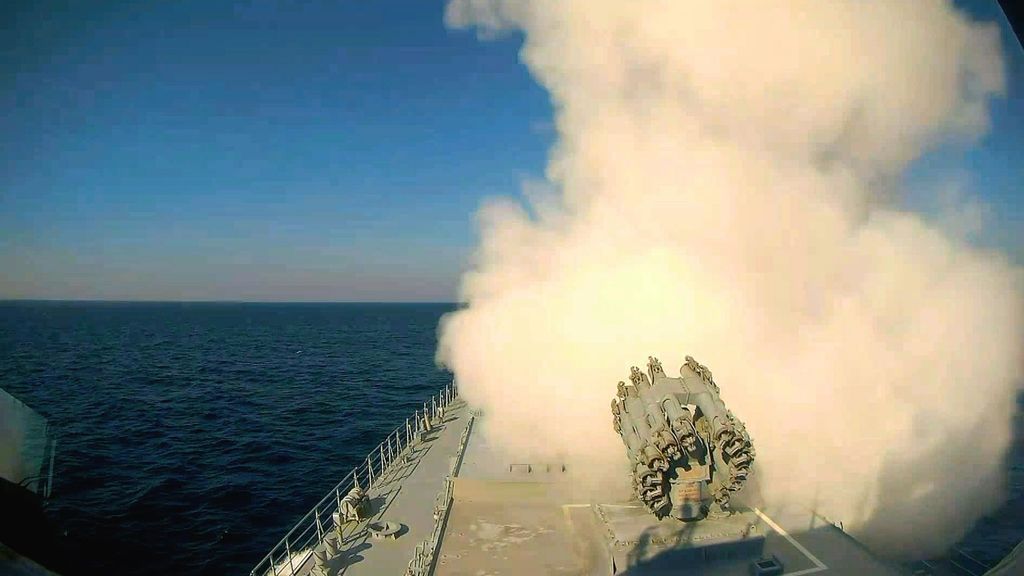 The launch of anti-aircraft guided missiles in the Black Sea Fleet that shot down a Ukrainian attack drone in the Crimean region, in April, 2022. (MoD Russia/Zenger).

Kremlin footage showing a Black Sea frigate launching cruise missiles has emerged amid claims that they shot down a Ukrainian drone.

In the video, two missiles are launched into the sky above the Black Sea, which then reportedly destroy a Ukrainian Bayraktar TB2 drone off the Crimean coast.

Zenger News obtained the footage of the crew on board the frigate firing the missiles from the Russian Ministry of Defense (MoD).

The Russian MoD said the strike took place off the Crimean coast and was carried out by servicemen of the Black Sea Fleet.

After detecting that the Ukrainian unmanned aerial vehicle (UAV) was in range, the crew launched two missiles from the Shtil anti-aircraft system and destroyed the drone.

The MoD said the UAV was carrying out reconnaissance operations on Russian ships in the Black Sea, as well as on coastal and ground positions in Crimea and southern Ukraine.

The Russian military also said that another Ukrainian drone was shot down over the Black Sea while approaching the Crimean city of Sevastopol, and that a Ukrainian Mi-24 helicopter was blasted out of the sky over a village in the northern region of Chernihiv Oblast.

The Russian footage shows no drones and no downing of anything.

The Oryx Blog last reported that the Ukrainian military had lost 12 UAVs over the course of the invasion so far, with 10 destroyed and two captured.

The blog put the corresponding figure for the Russian military at 20, with 18 destroyed and 10 captured.

The Oryx Blog only records losses for which there is visual evidence, meaning the true numbers on both sides are likely to be higher.

The blog is run by “Stijn Mitzer and Joost Oliemans, two military analysts devoted to investigating and sharing the ins and outs of conflict research, open-source intelligence and the occasional obscure piece of military history”.

Russian troops invaded Ukraine on February 24 in what the Kremlin is calling a “special military operation”. Today marks the 48th day of the invasion.

Western officials believe Russia is now focusing its attention on eastern and southern Ukraine after withdrawing its troops from areas to the north of the capital, Kyiv, which is located in the north-central part of the country.

Ukraine’s military has warned that Russian forces are likely to try to capture the south-eastern city of Mariupol soon. Reports from the besieged port city of a potential chemical attack delivered by a Russian drone have recently emerged.

Meanwhile, the United Nations says that around 4.8 million of Ukraine’s 7.5 million children have been displaced since the start of the invasion.