Known as the Antikythera Mechanism it was found in 1901, but it was of such complexity that it was originally regarded as a fake.
By Martin M Barillas April 12, 2022
Facebook
Twitter
Linkedin
Email 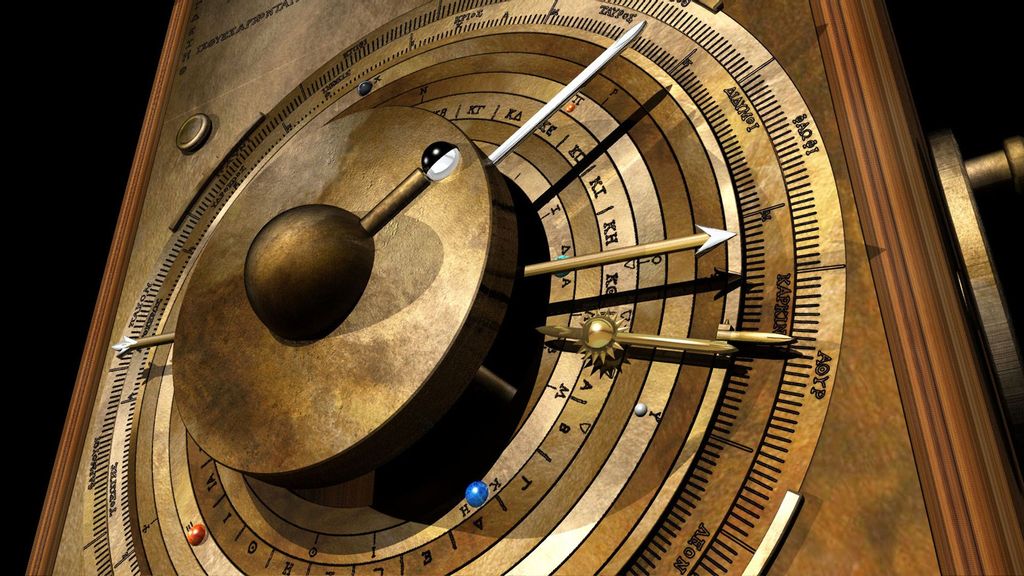 Cosmos Display at the front of the Antikythera Mechanism (two versions), showing the positions of the Sun, Moon and five planets as well as the phase of the Moon and the nodes of the Moon.  (2020 Tony Freeth/Zenger)

A mysterious mechanical device made more than 2,000 years ago to track the movements of heavenly bodies that was so complex it was believed to have been a fake was possibly invented by famed mathematician Archimedes of ancient Greece, according to UK experts.

Known as the Antikythera Mechanism (AKM), it was found in 1901 by sponge divers in the remains of a shipwreck near the island of Antikythera off the coast of Greece but it was of such complexity that it was originally regarded as a fake.

Its age has however since been confirmed and it is now kept at the National Archaeological Museum in Athens where it has been variously dated to 87 BC, or even within a generation before the shipwreck, which may have occurred between 70 and 60 BC.

Often known as the world’s first analog computer, the AKM is now a corroded bronze lump approximately the size of a large book, and split into fragments. Only about a third of the original survives. Scientists have tried to understand the device while seeking to replicate it for more than a century. Early x-rays showed that it featured a series of 30 surviving clock-like metal gears, and mysterious inscriptions.

But in the latest research, Dr. Tony Freeth, of the University College of London (UCL), a founding member of the Antikythera Mechanism Research Project, led a team that published a paper in Scientific Reports in 2021 about their research.

Using sophisticated x-ray tomography, he and his team have revealed the inner workings of the AKM, as well as the inscriptions that they identified as representing the planets, the Sun, and the Moon.

Freeth said in an interview: “In the ancient world, people were fascinated by astronomy. There were no street lights to create light pollution,” or distractions such as the internet. “The astronomical bodies showed regular cyclic motions, but they were complicated and hard to understand and predict” – at least with the mathematical formulas used at the time.

He added: “A genius from the ancient world created a machine that predicted the positions (as seen from the Earth) of the Sun, Moon and planets, predicted the phase of the Moon and eclipses of both Sun and Moon. And the machine did this at the turn of a handle at the side that could set the machine to a particular date. As the handle is turned all the astronomical predictors rotate at different rates.”

Freeth has a hunch that Archimedes, a Greek born (ca. 287 BC) in Syracuse, Sicily, is linked to the device. In an interview, he said: “It is an intriguing idea that the Antikythera Mechanism might have followed a design by Archimedes.”

And Freeth added: “There is some evidence that suggests that Archimedes might have had involvement in its design.” For example, Roman politician Marcus Tullius Cicero (106 – 143 BC) wrote in his books De re publica: “Archimedes&mldr; had thought out a way to represent accurately by a single device for turning the globe those various and divergent movements with their different rates of speed. …” while also describing another device built by the Greek.

In De natura deorum, Cicero described a device that resembled the AKM. Freeth said: “Both descriptions sound very much like the Antikythera Mechanism and offer convincing support to the idea that such machines existed in Hellenistic times.”

Freeth said: “It is tempting to believe that Archimedes started the tradition of making such devices, which continued through the Hellenistic period into the early centuries AD and then re-emerged in the great astronomical clocks of the 14th century AD and beyond.”

As a mathematician, Freeth said: “Who else but Archimedes?! Not many scientists from the ancient world were capable of designing the AKM.”

Freeth, who is also a filmmaker, has made a video about the device and his research.

Because Archimedes was killed during the Roman siege of Syracuse in 212 BC, Freeth also said that it is possible the AKM may not have been made by him directly but soon after his death and according to his design.

His 2021 paper, Freeth said, matches the physical evidence in the AKM fragments with its inscriptions of planets. He said: “This has never been done before. All the previous models (including my own) did not match all the evidence.”

Since the release of the paper, his team has worked on replicating the device with ancient techniques. One problem has been the replication of bronze tubes because the Greek fabricators would not have had modern lathes to shape metal. The tubes are essential for actuating the rings that bear the astronomical indications on the front and back of the device.

Freeth said: “I have also recently been involved in a small speculative addition to the AKM, which I am not going to discuss yet!”

He added: “I think that the main way that this device reshapes our understanding is in showing that the ancient Greeks had access to ‘high technology’—the sort of technology that later powered the scientific and industrial revolutions—at least 2,000 years before anybody would have thought it existed prior to the discovery of the AKM.”

Freeth said it was a genius who verified Greek scientific theories by machine. He said: “It is the first known time in history that the machine has been invented to predict the outcomes of scientific theories: a crucial landmark in the history of science and technology. I don’t know how this incredible idea emerged. Probably in the mind of Archimedes!”

Freeth asked: “Why was this technology not taken forward and developed further in the subsequent centuries?”

In answer, he said: “I don’t think that ancient Greeks realized the wider power of the technology they had created. The AKM was purely dedicated to astronomy. Maybe they looked around at the world and couldn’t see any other phenomena that followed regular cycles in the way that astronomy did.”

For example, he noted that they did not conceive that a machine could “calculate sums and multiplications.” He said finally: “The technology of the AKM was copied later in Islamic technology, for example with the work of Al Biruni, and in the Chinese astronomical clock made by Su Sung — both in around 1,000 AD.”

«Previous Post
Can You Read Your Pets’ Mind? Most Americans Think They Can»Next Post
Eight In 10 Americans Believe Having A “green Thumb” Is A Necessary Survival Skill