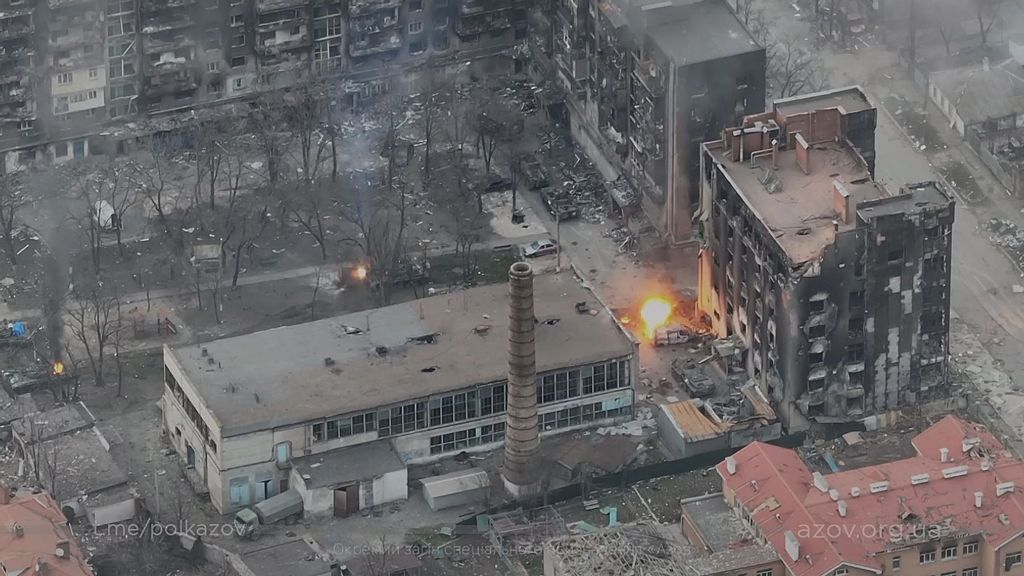 Azov Regiment continue to destroy the Russian tanks and vehicles on the streets of Mariupol in April 2022. (@polkazov/Zenger)

This footage purports to show parked Russian tanks in besieged Mariupol erupting in flames after shelling by the Azov Regiment.

Zenger News obtained the footage from Azov earlier today (Monday, April 11), with the regiment saying (in English): “They are over 10 times more than us, they have planes and ships, they have a lot of equipment … But the Azov Regiment continues to destroy the occupier on the streets of Ukrainian Mariupol!”

The footage shows several stationary tanks and other military vehicles daubed with the infamous white ‘Z’, marking them out as Russian.

They are parked next to what looks like a factory, with empty, damaged buildings that look residential in character nearby.

Fireballs and plumes of smoke are seen emanating from some of the vehicles as they are apparently picked off by shelling from Ukrainian forces.

The Siege of Mariupol began on day one of Russia’s invasion of Ukraine and is ongoing.

The siege has seen 90 percent of buildings in the city – which lies in south-eastern Ukraine, on the Black Sea coast – damaged or destroyed.

Local officials say over 5,000 civilians have been killed in the siege so far.

The Azov Regiment, formally known as the Azov Special Operations Detachment and formerly called the Azov Battalion, has been active since May 2014.

In September of the same year, it was incorporated into the National Guard of Ukraine, the country’s national gendarmerie.

The regiment has far-right origins. However, only a minority of its estimated 900 members are believed to have far-right tendencies these days.

Russian troops invaded Ukraine on 24th February in what the Kremlin is calling a “special military operation”. Today marks the 47th day of the invasion.

From 24th February to 11th April, the total combat losses of Russian troops stand at 19,500 personnel, according to the General Staff of the Armed Forces of Ukraine.

Russia is shifting its focus to eastern and southern Ukraine after withdrawing its troops from the north of the country.