Footage was shared by Armed Forces of Ukraine on April 8 with the message: "Azov in Mariupol continues to destroy the enemy."
By Lee Bullen April 11, 2022
Facebook
Twitter
Linkedin
Email 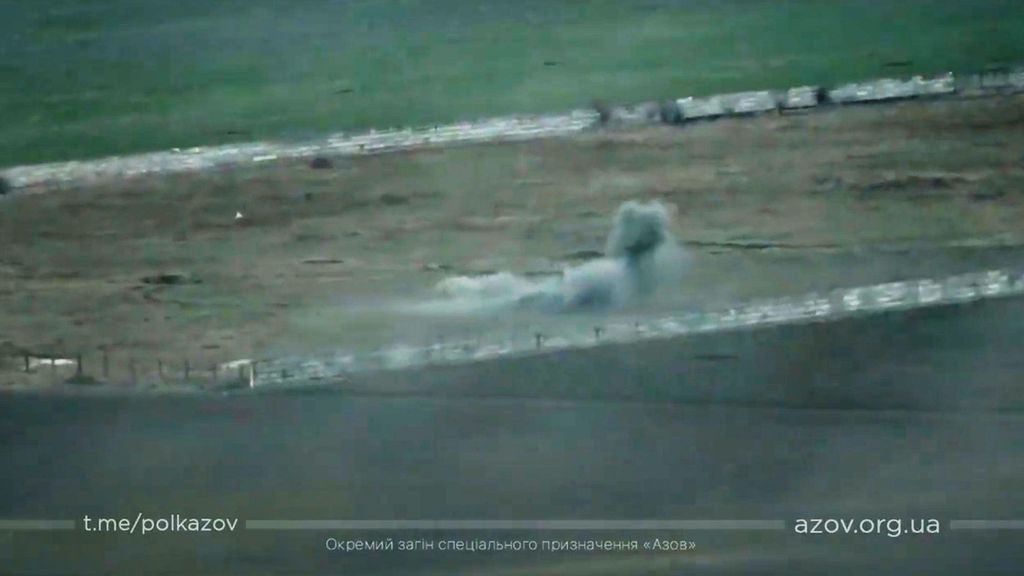 This is the moment Ukrainian soldiers from the fearsome Azov Regiment blow up a Russian armored vehicle in a field.

The troops carried out the strike on the outskirts of the south-eastern Ukrainian coastal city of Mariupol.

In the video, Ukrainian soldiers are seen tracking an enemy armored vehicle as it rolls across a field.

With a single strike, the vehicle is apparently blown up and a large plume of dark smoke fills the air.

The footage was shared by the Armed Forces of Ukraine this morning (Friday, April 8) with the message: “Azov in Mariupol continues to destroy the enemy.”

The regiment has gained a fearsome reputation for wiping out Russian armor.

According to Ukrainian reports, the Azov Regiment destroyed two other Russian tanks on April 7.

The day before, Azov troops destroyed equipment of several Russian units and ammunition depots in the defense of Mariupol.

The regiment also claimed to have “eliminated” many enemy infantry troops.

Russian troops invaded Ukraine on February 24 in what the Kremlin is calling a “special military operation”. Today marks the 44th day of the invasion.

From February 24 to April 8, the total combat losses of Russian troops stand at an estimated 19,000 personnel, according to the General Staff of the Armed Forces of Ukraine.

The Azov Regiment, formerly known as the Azov Battalion and formally called the Azov Special Operations Detachment, is a unit of the National Guard of Ukraine – the country’s national gendarmerie – and is based in Mariupol.

It is an all-volunteer infantry military unit and has an estimated 900 members. It has far-right origins and a minority of its members are still said to have far-right tendencies.

The latest developments state that at least 39 people have been killed and dozens injured after rockets hit a train station in the city of Kramatorsk, in the Donbas region, in eastern Ukraine, according to the country’s authorities.

Donbas is where Russia is believed to be stepping up its offensive as it withdraws from the north of Ukraine.

Parts of Donbas have been under pro-Russian separatist occupation since 2014. The so-called Donetsk and Luhansk People’s Republics were recognized as independent states by Russia just days before the invasion was launched.

«Previous Post
Fogs Of War: Russia Releases Supersonic Cruise Missile Off Murky Coast»Next Post
Cat Shot At And Shelled In War-Torn Ukraine Travels Over 2,500 Miles To Be Reunited With Family