Kalibr missiles are developed by the Russian Federation. They can be launched from ships and submarines, as well as from aircraft.
By Joseph Golder April 11, 2022
Facebook
Twitter
Linkedin
Email 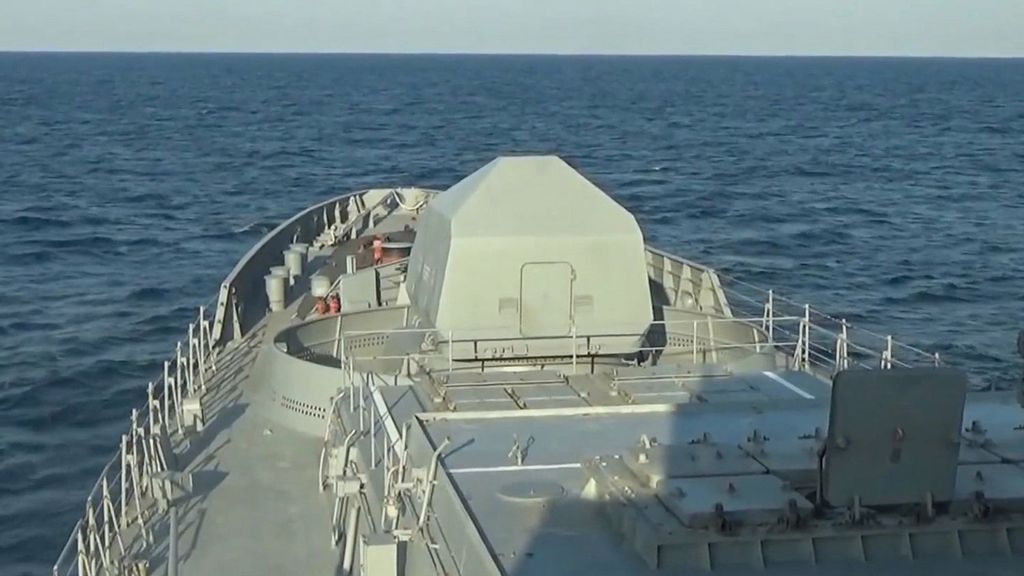 These images reportedly show Kalibr cruise missiles being fired from a Russian frigate in the Black Sea and targeting “Ukrainian military infrastructure”.

The images appear to have been shot from a Russian war vessel at sea and show a hatch opening on the deck of the ship.

Seconds later, there is a flash of bright light and a roar as a missile is launched into the sky.

The camera lens is quickly covered in smoke before flashes of light appear on screen in rapid succession as further missiles are launched.

A salvo of four missiles in total is reportedly fired before the footage ends.

There is, however, no information about the precise target or if the strike was successful.

Zenger News obtained the footage from the Russian Ministry of Defence (MoD) yesterday (Sunday, April 10), with the Russian MoD saying that the images show “Kalibr launches from a Black Sea frigate”.

Kalibr missiles are developed by the Russian Federation. They can be launched from ships and submarines, as well as from aircraft.

The images were also carried by Russian media outlet Lenta, which is based in Moscow and belongs to the Rambler Media Group, itself owned by the majority state-owned Russian bank Sberbank, which notoriously lost over 99 percent of its market value on the London Stock Exchange after Russia invaded Ukraine on Thursday, February 24.

Lenta said that the images showed “high-precision cruise missiles” being launched from the Black Sea frigate, targeting “military infrastructure facilities of the Armed Forces of Ukraine”.

The images emerged as the World Bank issued a report stating that the Ukrainian economy is set to shrink by nearly 50 percent this year, with the economic output “in the Europe and Central Asia region” forecast to “contract by more than 4.1 percent in 2022”.

Allegations of Russian war crimes and atrocities in Ukraine are mounting, with graphic images making headlines around the world.

US Secretary of State Antony Blinken is quoted by the US State Department on Friday, April 5, as saying: “We strongly condemn apparent atrocities by Kremlin forces in Bucha and across Ukraine. We are pursuing accountability using every tool available, documenting and sharing information to hold accountable those responsible.”

UN Secretary-General Antonio Guterres said: “I regret the divisions that have prevented the Security Council from acting on Ukraine & other threats to peace.

“Today I urged its member countries to do everything in their power to end the war and mitigate its impact on the people of Ukraine & beyond.”

Civilians leaving eastern Ukraine amid fears of a Russian onslaught there suffered a missile attack on Friday at the Kramatorsk train station, with 57 confirmed dead so far.